We had a very busy weekend this weekend. Busy, but fun. We've been SO ready to get camping, Jacob especially. I've been planning to camp this weekend for a while, and it's a good thing it was in the works because it was Jacob's only consolation last week when his first soccer game was rained out (well, camping AND a trip to see Monsters vs. Aliens in 3D).

Jeff and I both took off on Friday. I had planned to ride my bike from Edwardsville to Marquette Park (where we were camping). I had a bunch of errands to run in the morning, so I finally left around 12:30. It was really windy, which made the ride a lot more difficult. I finally made it to the Piasa Bird at 2:25. Bill was riding with me from there to the park. I thought the wind was bad before, but it was brutal on the River Road! We were both struggling. We rode about 14 miles and then just had Jeff pick us up as he was on his way back to Edwardsville to pick up Jacob and the boys from school. We stopped about 7 miles short of the campground. I was disappointed to not make my goal, but I was awfully glad to see Jeff when he drove up!

By the time we picked up the boys and Kelsea, had snacks, and got back up to the park, it was 7:30 or 8. We had grilled cheese and tomato soup and then just watched a movie in the camper because it was pretty chilly. Saturday morning we had to drive back to Edwardsville again for Jacob's first soccer game. (Yeah, we did a TON of back and forth driving this weekend, but you know how it is...if we waited for a free weekend to go camping, the camper would sit in the garage until all of the boys are grandparents!!). 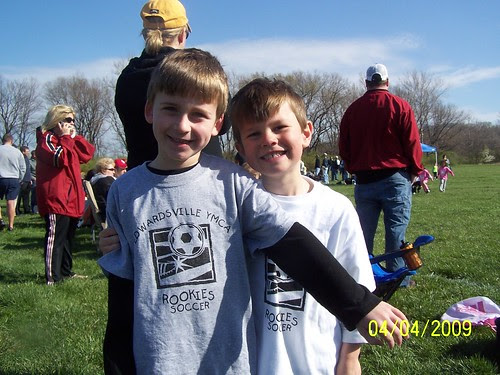 Here's Jacob with his friend, Ben, who was on the same team last session. We're hoping to get the team all back together for the next session. This session stands to be an interesting experience. We have 9 kids on the team, and yesterday one was absent and two wanted no part of actually being on the field. Hmmm.

After the game, we grabbed lunch with Carol and then headed back to the park for a hike with Bill. Without a breeze, it was pretty warm, but when the wind was blowing you wanted a sweatshirt. Well, I did, but apparently I'm always cold. 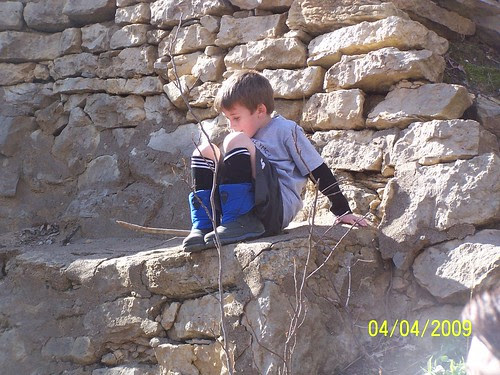 Of course, Jacob had to climb on the rocks. And say what you will about my child, but he definitely has a strong sense of self and his very own "fashion" sense. Loving the shorts/snow boots/soccer socks combo. I had forgotten to pack his tennis shoes, so all he had was cleats and snow boots, but he'd have worn the snow boots anyway. 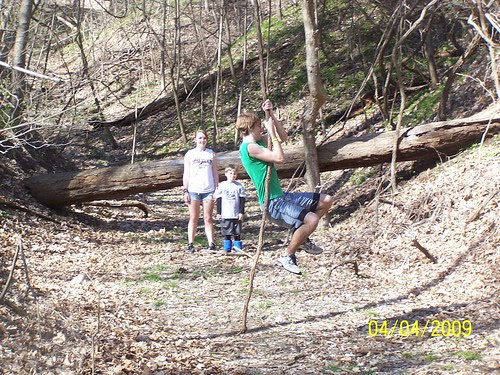 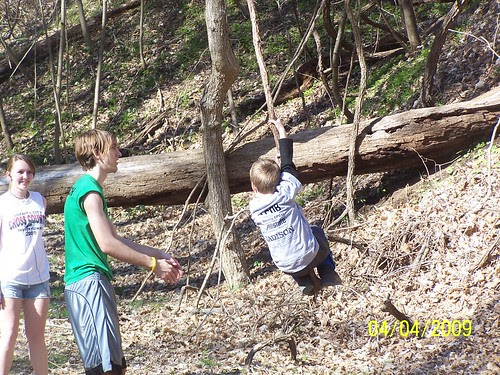 Of course, Jacob just has to be like his big brother. 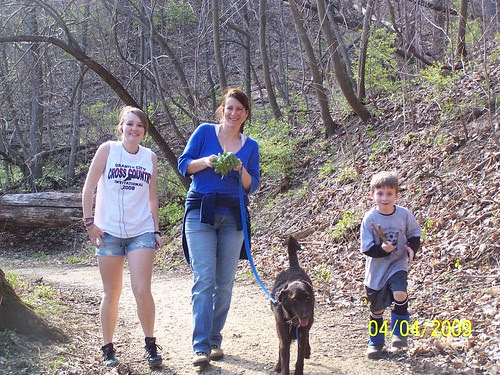 Here I am holding my birthday presents. Jeff started things off by giving me a couple of little purple flowers (weeds). Then, Jacob had to. Daniel, not wanting to be left out, gave me a piece of grass. And then it was on. I ended up with a big handful of weeds, sticks, and dirt. Luckily, Nathan didn't find the "gift" he was looking for...a dead squirrel. 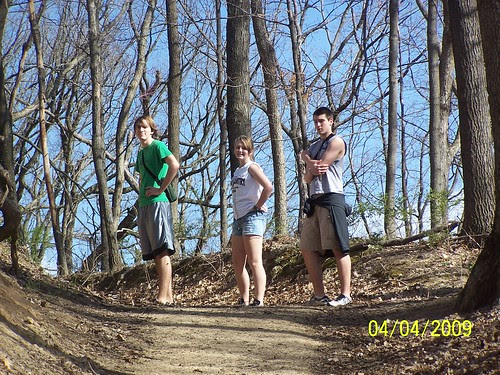 Daniel, Kelsea, and Nathan patiently waiting for us. 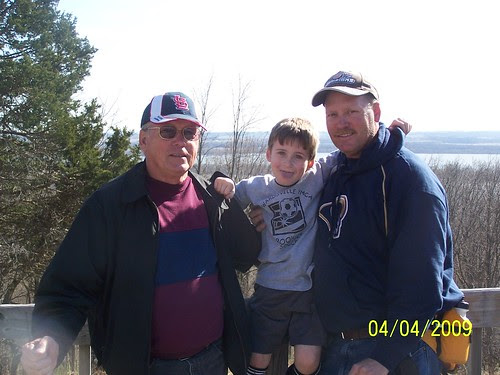 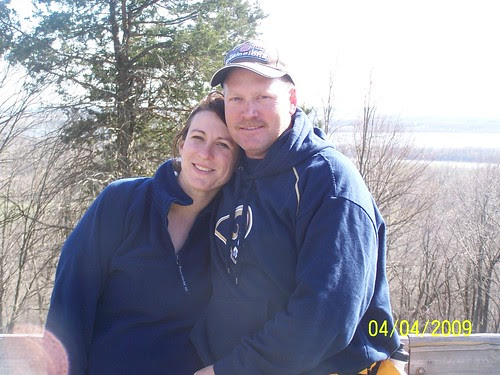 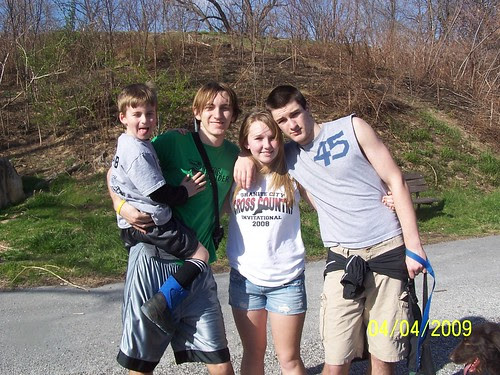 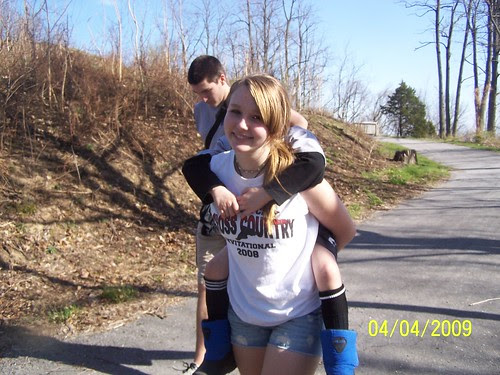 Jacob was tired of hiking. And we were tired of listening to him complain, so he got a ride from his sympathetic cousin.

After our hike, we went back to the playground to play some tennis. Berkeley had a blast running around the fenced court. The tennis game was...well, it was an experience. 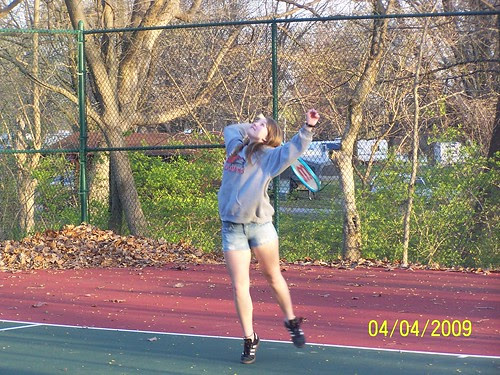 It started out serious enough, but soon degenerated... 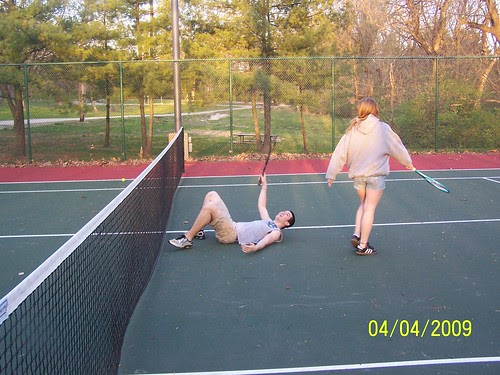 After tennis was supper. The campfire felt great! What a great night to hang around a fire and roast s'mores. Rain had been forecast, and believe me, I was praying all day that the rain would hold off until we got home. We really didn't want to have to pack up in the rain. Thankfully, we had a dry night AND were able to pack up in beautiful weather. We were even more thankful for the dry night and morning when we drove through Alton and into Edwardsville and saw that the streets there were quite wet.

All in all, it was a great weekend! We're already looking forward to our next camping trip (not that we know when it'll be). I'm sure it'll be another close trip, maybe Carlyle, since soccer season goes until May 9.