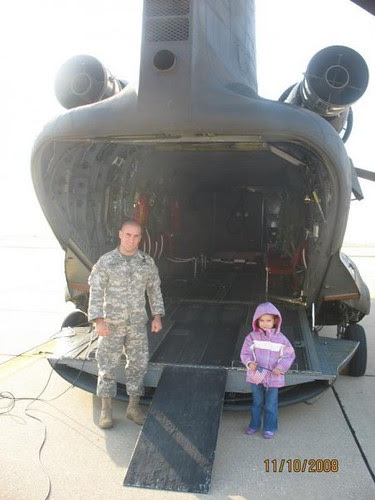 The wars in Afghanistan and Iraq are never far from my mind. Both my nephew and my brother are serving in the Middle East. Both are on their second tours of duty. That's my nephew above in the picture with his daughter, who is now 5. He's a gunner on a helicopter crew serving in Afghanistan.

At least, he was until Thursday night. On Thursday night, a missile hit the back of his helicopter. The pilot was, thankfully, able to land the helicopter safely, but Casey was seriously injured by shrapnel. The war has been made far more real to our family. We read in the papers all the time about people who are killed and injured, but this person is ours.

He was sent to Germany, where he had six surgeries, and arrived at Walter Reed Hospital in Washington, D.C., tonight, where he is undergoing yet another surgery on his abdomen. At this point, the tests show that no vital organs were damaged. He has a lot of therapy and healing in front of him, but the outlook is positive. Please pray for him.

Families sacrifice for each other. That's just part of the job. Military families have an even bigger burden to bear. I've watched my niece live though her (single parent) father's year-long deployments and regular absences for trainings. I've watched my nephew's young marriage fall apart during his first deployment. Seen his young daughter live without her daddy. It's hard. You know it going in, but you know it like you know labor pains hurt. The knowledge is intellectual until you're in the middle of it, and then you have a whole new awareness of pain.

And through this ordeal, I've seen my sister-in-law's sacrifice and love for Casey. He's not really my nephew. He's not really her son. He's the baby a friend of hers gave birth to...a friend who wasn't really prepared to have a child. He's the baby that she raised for several years until her friend decided that she was ready to parent. And "ready", here, is a relative term. My sister-in-law has been a constant source of love and support for Casey. She's been the one at his high school events, at his boot camp graduation, and even more...she's been the one to care for and bear with him through the day-to-day stuff of raising a child. Not the "fun" stuff, but the real stuff.

And I've watched as his "real" mother has pushed herself to the forefront at his wedding, and now again as this drama unfolds. And watched as my sister-in-law, out of love and a desire for Casey to be happy, to avoid feeding drama, steps backward. She is the embodiment of the real mother in the story about Solomon's wisdom, the one who is willing to give up her child to avoid him being cut in half. And she'll be the one who is supporting him once the "excitement" is over. And, in the long run as well as the short, she's the one who gains. Because though she didn't give birth to him, she's the one who's had him, in a very real way, for most of his life.
Labels: Casey