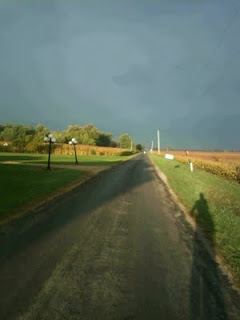 Yesterday was the Tour de Coal in Benld, IL. It's a metric century, or 63 miles. Last month, I rode in a "60-mile" ride that turned out to be a 68 mile death march. I had terrible leg cramps from about 25 miles on, largely, I think, because I didn't drink enough. It's pretty easy to stay well hydrated when it's hot outside because you're dying of thirst. Cooler days, while great for riding, make it a little harder to remember to keep drinking.

The Tour de Coal was my warm up for the Ride the Rivers century next month. My first century. Gulp. I was a little apprehensive how it would go after struggling so much last month. I even told the friend I rode with, "I should have sent my century registration before this ride!"

Despite a rainy forecast, we had a really nice day for a ride. The sun was out a lot of the time, and it was fairly cool. The route was advertised as flat to rolling hills with some substantial hills. Pretty accurate. I love the rolling hills. They're a lot of fun. Not so much a fan of the bigger ones, though!! At one point, I went down a pretty steep hill. I've gotten braver than I used to be, but this one made me a little nervous. At the bottom, I thought, "Boy, I'm glad I didn't have to go up that hill!" And then I came around a corner and was facing its evil twin!
One of the nice things about the organized rides is you always find people to talk to. This one was no different. I rode the last 20 or so miles with an older man who passed me. After he passed, I decided I was going to at least keep up with him and so pedalled along behind him. After a while, I pulled alongside me and started chatting. Nice guy, but he managed to unintentionally insult me twice in our time together. First, he told me I was good to ride behind because I'm big. Okaaaayyyy. Then, later, he told me it was good that he came across me because he had been starting to break a sweat!! So...I'm fat AND slow. Haha. I know he didn't mean it that way, but it sure came across that way. If he was someone I was going to hang out with in "real life", I'd have called him on it for sure!!
Overall, I was slower than I'd like to be, but I felt great until the last ten miles or so. Then, we hit a very unwelcome headwind that really slowed us down. That's when I had to start the self-talk: "Only 10 miles...you can ride 10 miles...you've done it before....only 9 more miles...you can ride 9 miles...you've done it before..." And I did, indeed, do it. :)
The rain started about 10 minutes after we got into the truck. Great timing! For us, anyway. I'm sure it was a little disappointing to those attending Benld's fall festival. All in all, it was a good ride. Well marked, nicely spaced SAGs, and a good route. I'll likely be back next year for it.