I rode my first century this past Sunday. What an experience! I "decided" to do this century back in June or so, and then went back and forth all summer about whether or not to actually do it. I'm glad I did!

The weather forecast the week before the ride was enough to make a person bipolar. Up and down, up and down. "Yea! Highs in the 60's!"...."Ugh...lows in the 30's...." Well, when we started, the temperature was a blistering 39. Definitely on the "ugh" side of the thermometer. 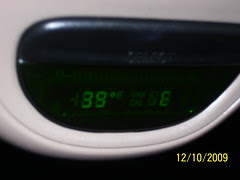 I'd like to say it warmed up quickly, but it really didn't. Even when the sun came out, it was pretty cool. It wasn't as bad as I had anticipated, though.

We started in St. Charles, near the Ameristar Casino. I rode for the first mile or so with a friend, but once we hit the first hill he was off and away. Here's the first bridge we crossed... 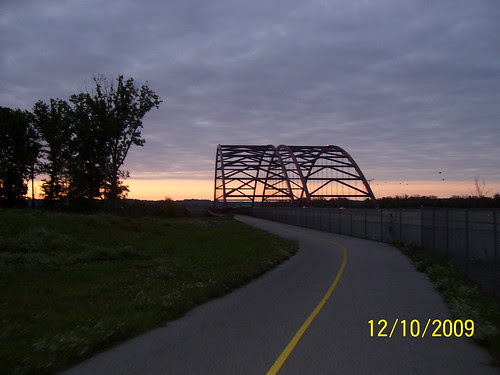 We passed Westport and Creve Coeur Lake, around which was the monster hill of all time. Oh, my gosh...it just kept going up and up and up. You know that children's song, "This is the Song That Never Ends"? Well, I was humming, "This is the hill that never ends/It just goes on and on my friends/We starting climbing it a long, long time ago..." You know how it's hard to keep your bike upright when you're going really slowly? That was me. I got well acquainted with my granny gear!

The ride was primarily road riding, but we did ride on parts of some trails. This one was somewhere around Creve Coeur. 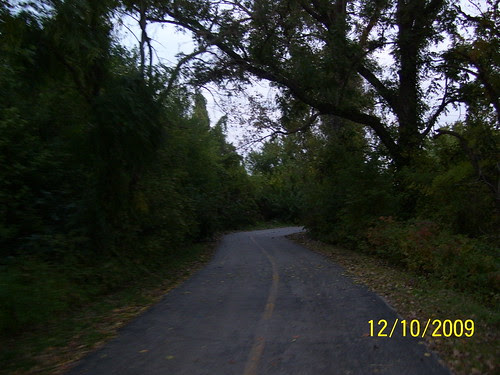 The first SAG, or rest stop, was about 25 miles into the ride at the St. Louis History Museum. Good snacks, but only two port-a-potties and lines at both of them. 25 miles is a long time to wait for a bathroom when you're hydrating like crazy! 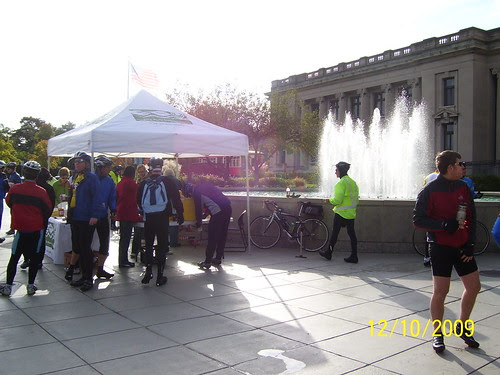 After leaving Forest Park, we rode into downtown St. Louis. Traffic wasn't terrible, but with a Rams game later in the day, there were already quite a few people around and the tailgaters were already set up. I was very glad that there were other riders around during this portion of the ride. I was definitely a little intimidated by riding through the city streets. 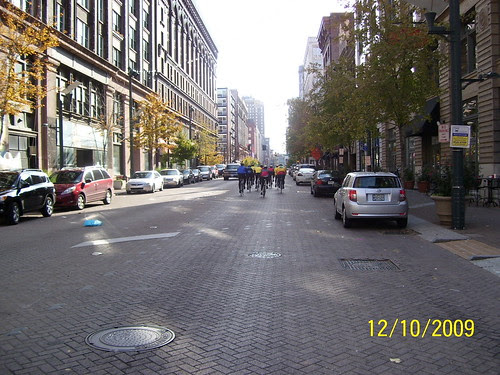 There's the pack...way ahead of me. This was to be a theme for the day, except that usually they were too far ahead of me for me to see! :) In the city, I was able to catch up at the stoplights.

The next section of the ride was along the Riverfront Trail. 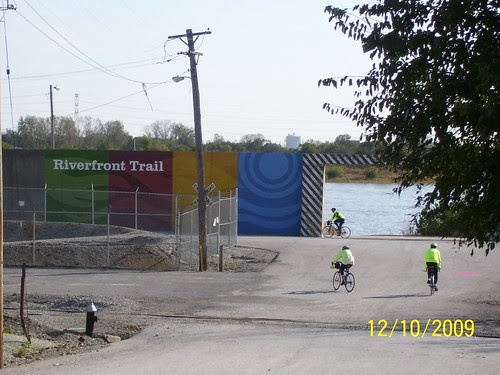 There was a mix of river views and industrial stuff.

Rest stop number 2 was about 43 miles into the ride at the Old Chain of Rocks bridge. 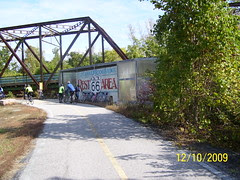 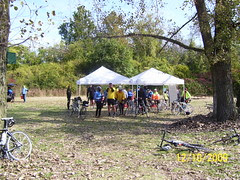 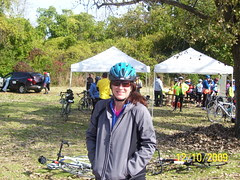 It's a very pretty bridge. 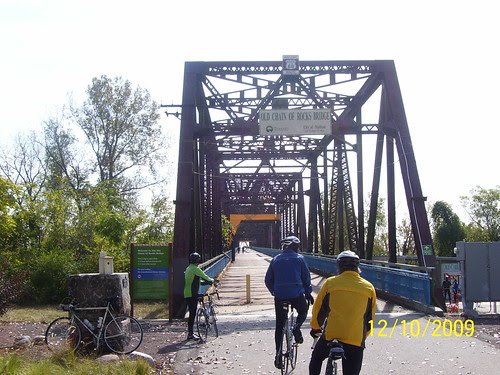 After crossing the bridge into Illinois, I was on a bit more familiar territory. We rode the levees along the river though the Hartford/Wood River area to Alton. 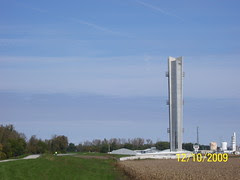 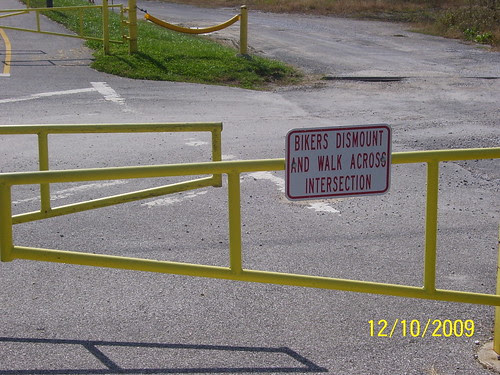 These were fun. The levee is broken up in several spots by roads that cross it. You have to ride down from the levee, get off your bike, walk it across the road, pass through another set of gates, and then ride from a standstill back up onto the levee. So much fun to ride uphill from a dead stop after riding for 50 miles, but it was definitely a nice break for a bodies that have been sitting on a bike seat for all that time! 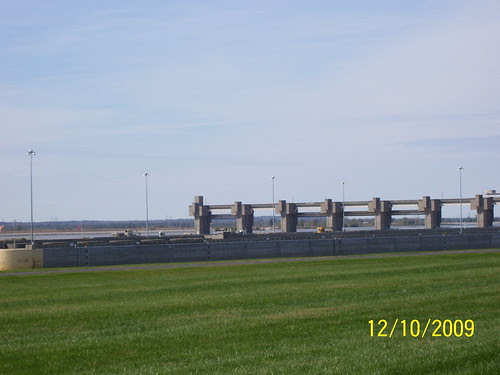 Melvin Price Locks & Dam 26, East Alton, IL. Incidentally, this is also the home of the National Great Rivers Museum, which is a neat place to visit. 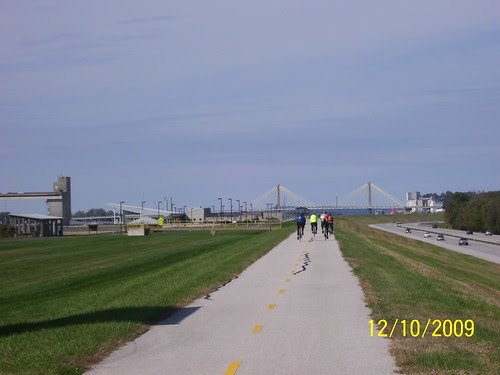 Rest stop #3 was at Russell Commons Park in Alton. At this point, we were 59 miles into the ride, and I was starting to realize that I felt pretty good. All along as I planned to do the century, I was very unsure that I would be able to finish it, but 60 miles into the ride I wasn't even feeling sore or tired. It was a little distressing to see all of the riders who zoomed by me, but I know that I'm slow and I wasn't out there to race. 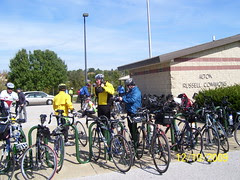 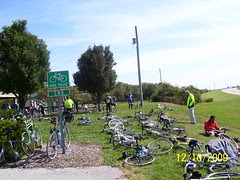 Lunch stop! I still get a kick out of seeing this many bicycles in one place. :) 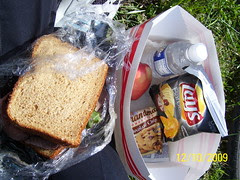 I went to high school in Alton, so this portion of the ride was something like home territory for me. The first thing we saw on the Great River Road was the Piasa Bird painted on the bluffs. 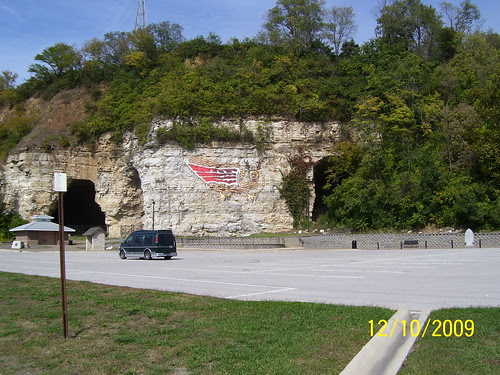 The legend of the Piasa Bird is an interesting one.

The River Road is a beautiful area to drive or ride any time of year, but particularly in the fall when the trees are changing colors. 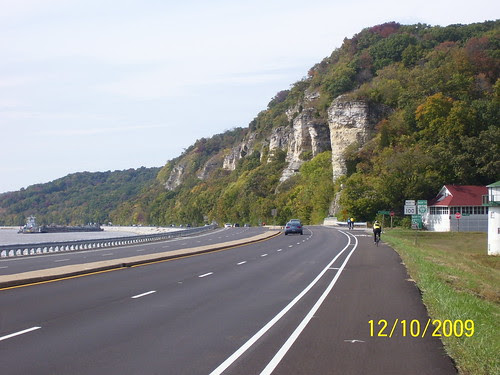 My aunt lives in the Calhoun County area, and I went to college in Quincy, so I've logged a lot of time driving on the River Road. I can remember stopping with my parents for peaches at the place below. 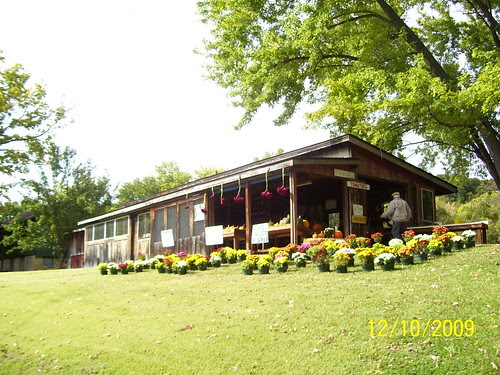 After passing through Grafton, we did some riding on the bike trail that parallels the road. Very pretty, but hillier than the (blessedly) flat road. I had to walk my bike up one hill here. :( 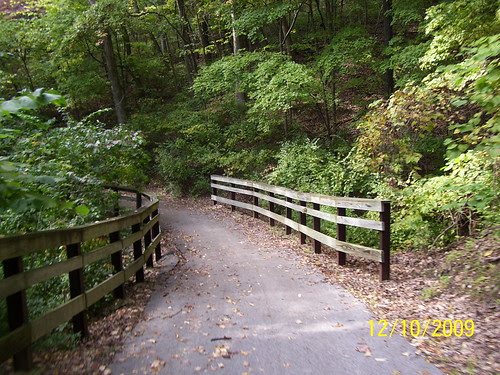 A neat thing about the ride was that we got to ride two different ferries. This caused me a little stress, though. As I rode along the bike trail, I could see the parking lot for the first ferry. I hadn't had any problems finding the trail markings before this point, but I started doubting myself. Did I miss a turn? Am I going too far? Oh, no...I'm going to have to ride even FURTHER! Never fear, once we reached the Marquette Park stables, there was a turn and a short 1/3 mile trip back to the ferry.

I lucked out and made it to the ferry just as they were loading the cyclists, so I didn't have to wait at all. 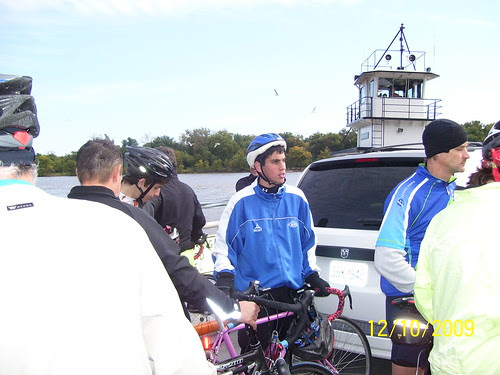 Here are some of the other riders on the Brussels ferry.

After the first ferry, we passed through about 10 very farm-y miles. 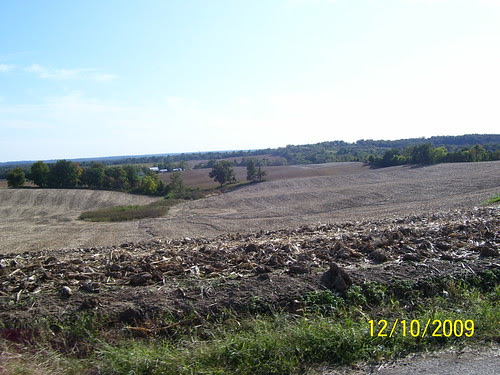 As we had gotten off the ferry, I just let everybody else go ahead of me. At this point in the ride (about 80 miles in or so), I had been passed by probably 90% of the riders (another 8% probably having started ahead of me!) and was clearly going to be at the back of the pack. I actually stuck within sight of the pack for a while...I felt pretty good after getting off the ferry...but eventually they passed out of my sight, as I knew they would. Well, that was OK, but when the group of riders from the next ferry started passing me...THAT was a little depressing!! 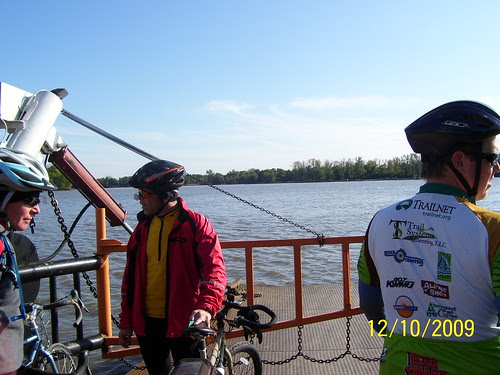 Here are some other riders on the Golden Eagle ferry...only about 10 miles to go once we cross!!

The end of the century, funnily enough, was about the same place that the Katy Trail ride ended! 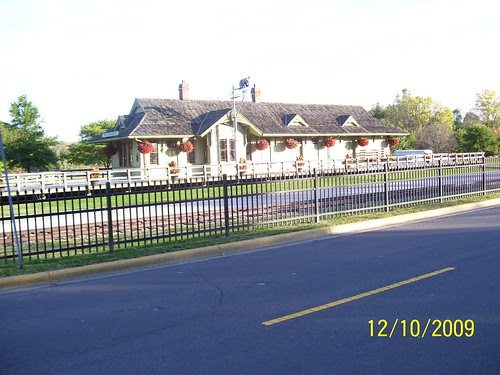 I have a picture of myself, back on a much warmer day in June, eating lunch at this building after riding the entire Katy Trail. :)

That was pretty much it. I rode into the parking lot, and the ride was over. It was a little sad...I felt such a sense of excitement and accomplishment...I did it!...but at the end of the ride there's no finish line or cheering group. You just pack up and go home. And I guess that's just kind of how life is.

I did think it was one of the less friendly rides I've been on this year. Probably 75% of the people who passed me (and, as I said, there were a lot!!), didn't speak at all, even to signal "on your left". Overall, however, it was a great experience. Trailnet provided great maps, the route was scenic, interesting, and well-marked, and good support was available. I'm already thinking ahead to next year's rides....
Labels: biking Ride the Rivers century trailnet