Meg of Meg Runs had a recent post celebrating her grandbaby Sparkle Pants's second birthday and the way that things work out. Meg talked about the fact that, while a baby wasn't in her college-age daughter's plans, he has brought so much love and joy to all of their family. The post was a very touching love letter to both her grandson and her daughter. It touched me, in particular, because my mom could have written it.

Meg told of her daughter coming home from school late one night and sobbing the news in their bedroom. I told my parents one evening at the dinner table just after the end of my freshman year of college. I was nineteen, the good girl, at my private Catholic university on an academic scholarship. I don't remember now if I cried, but I'll never forget my dad's tears.

"This is going to make school really hard, Kate," he told me, and that was the closest to recrimination I heard. They knew it would make school hard, and my parents did everything in their power to keep me there...buying me a house near campus and financially supporting me, my new husband, and our baby.


If there had been a "Least Likely to Be a Teenage Mother" category in my high school yearbook, it would've featured my picture. Having a baby at 19 didn't figure in any part of my plans for the future. But there I was. There he was. And my life went on, albeit with a much different reality. Make no mistake, it was hard. But when my dad died not quite a year after D was born, he'd both held his first grandchild and walked me down the aisle, two things that never would've happened according to my plan.


And this week, I've sat and watched my two surprises (yes, two...it takes some of us repeated lessons before we figure things out) surprise me once again. 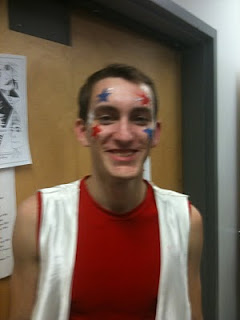 Ever since getting a lead role in the middle school musical when he was in seventh grade, D has been heavily involved in choir and drama. Friday night I had a wonderful time watching my oldest child sing, act, and dance in front of a packed house in the high school's production of "Starmites".

I know I had the hugest smile on my face as I watched.  This was probably his biggest part in any of the high school drama productions.  Competition is fierce; there is an amazing amount of talent at our high school.  You can't tell it from this backstage snapshot, but the productions are nearly professional quality.  And my son gets to be a part of that.

Thank goodness for his musical and acting talents, too, because his concerts and plays are pretty much the only "culture" our family is exposed to these days! 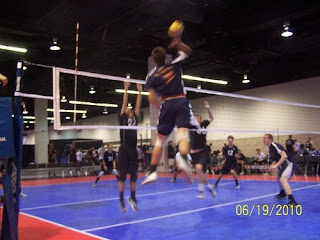 As D was making his way through the "Hell Week" before the show, N had accomplishments of his own.  My boys have pretty much chosen separate paths and interests, and they're each very successful in their own way.

D. is more academically driven, and N is very involved in athletics.  Though he's played football, run cross country and track, and played basketball, his current focus is volleyball.  That's him spiking the ball in a California tournament with his club team.  Well, after taking a year off of basketball so that he could focus on the club season, N. decided this year that he wanted to play basketball, too.  At the same time as volleyball.  So he tried out and made the team.

My ex-husband's wife and I laugh because the ex's mother claims any talent the boys have: "Oh, he gets that from me/my side of the family".   They are standouts in their enormous high school.  My entire school was smaller than either of their classes.  I couldn't get a part in a play directed by my best friend.  I made our "no cut" basketball team and started varsity my junior and senior years, but it was an entirely different level of competition.  My own mother describes my singing voice as "not very pretty".  I'm not sure where their abilities came from, but I know it wasn't from me.

All they "get from" me is love, a ride to practice, and their own personal fan club. And I get surprised, on a regular basis, by these two young men I never would have imagined if my future had been left up to my own plans.
Labels: plans surprise unplanned blessings what do I know