My own private Frostbike ride 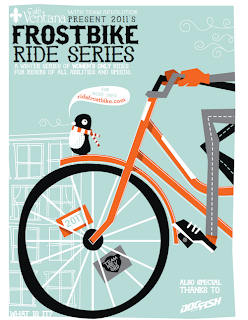 So after going back and forth about it all week, I went ahead and signed up for Team Revolution's Frostbike MTB series.  Basically, members pay $50 for the series of 4 weekend rides. For each weekend (Saturday or Sunday) you ride, you get $10 back.  If you complete the series, you get a cool Frostbike T-shirt.  Well, I already know I'm missing next weekend because of our Chicago trip, so I'm out the t-shirt, but the $10 per ride back is a good incentive for me to not blow off a ride.  I needed that incentive this morning.  Waking up at 5:45 was already not fun (and earlier than I get up for work unless I have to get to run before work), but in addition, we had about 3 inches of snow on the ground.

I guess the "A" weather team must have taken off after being on the air for 24/7 during "Snowpocalypse", because all we heard was a possiblity of flurries.  I knew that they'd had to cancel at least one of the road series rides due to snow, and I'm not going to lie...I was hoping for a cancellation this morning.  I checked the website numerous times, to no avail, so I grudgingly got myself ready to head to Castlewood.  Many thanks to my wonderful husband, who got up early to load my bike for me and clear all that snow off the car!

Guy: "Are you as dumb as my wife and doing that Frostbite run?"

Me: "No, I'm doing the Frostbike Ride, so I'm probably dumber."

The interstate was awful.  Much of the first part didn't look like it had been touched by a snowplow.  I don't know if the transportation departments were taken as much by suprise as we were by the weather, but I do know that the news was still forecasting accumulation of 1-2" while we were clearing away 3 or so.  I was laughing at myself as I drove because if I'd been driving to work I'd have been upset about having to go in this weather, but here I was driving further for a bike ride...and excited about it.

Unfortunately, I only made it about halfway.  I had stopped for gas (too bad I didn't notice the tank was almost empty back at the first gas station!) and checked my phone.  There was an email saying that the ride was cancelled due to road conditions.  I was really disappointed, but it was probably the right call.  I'm not sure I'd have made it on time anyway with having to drive 40-45 mph most of the way.

Not ready to go home:

As ready as I'd been to bag the whole thing back when I was still in bed, now that my bike was loaded and I was dressed to ride, I didn't want to just go back to bed.  I decided I'd go back home and ride the trails there.  Since I was alone, I opted to stay away from the singletrack and just headed to our paved bike trails.

A big challenge was just finding a place to park!  The first place I went has parking right along the trail on a dead-end road.  I guess the road hasn't been plowed since our first snow/sleet on Tuesday, because I couldn't even see where the road was.  I went to the high school, which I knew was at least semi-clear, but the custodial staff was out working on the lots, and I couldn't bring myself to ride past them on my bike.  It's one thing to be out in the cold and snow when you want to be; it's another altogether when you have to be.  My third stop worked out, and I finally got my bike out.

﻿ It was so beautiful outside.  I love the look of the snow on tree branches, and there was plenty of that to see.  I never saw anyone else while I was out on the trails, but there were three sets of footprints, so I wasn't the only crazy one outside today.  I also didn't see any deer, which surprised me a little, but I saw tons of animal prints in the snow.

﻿ These are flat, paved trails, but the combination of fresh snow over all the old snow/ice/sleet that had been tracked up and been refrozen made for an interesting ride. You can tell from my wavy tire track below that I was sliding all over the place.  Nothing like dealing with obstacles you can't see!  I had to put my foot down quite a few times, but I never fell.  As I rode longer, I felt a little more confident and kept my feet on the pedals more.  Right now, my first instinct when it gets choppy is to put my foot down, but the longer I rode the better I did at remembering to keep pedalling and trust my bike to take me through.

I did a good job dressing today.  I don't have bike tights, or any lined tights, so I wore my running tights over my bike shorts and some over the knee socks.  That left about 6 inches of leg that wasn't covered by two layers, but it didn't get too cold.  On top, I wore a compression shirt with a fleece sweatshirt and my waterproof jacket.  A hat and some fleece gloves finished things off.  I was really comfortable.  Of course, I was riding pretty slowly and stopping frequently to take pictures; if I'd been riding harder I may have been too warm in what I was wearing.
I've ridden and run on this stretch of trail many times, and every time I pass the turn-off I wonder where exactly the trail goes (as I pass by and go my normal route).  That was my plan today, too, but my bike kept steering towards the turn.  Since I was just out for the experience anyway, I let the bike lead me.

I ended up on a series of uphill switchbacks.  Thanks, bike!  I didn't make it too far before my foot was down, and the rest of the way up the hill I was walking it.  I can get started on an uphill in normal conditions, but the combination of snow and uphill beat me.  I rode to where the trail meets a parking lot and then turned around to head back.  It's a beautiful area, and I think I'll hit the pedestrian-only sections of the trail at some point, too.
If you've been reading this blog for long, you know I'm a huge chicken, especially on downhills (one of the reasons I'm trying to get out on these group rides and hopefully overcome that).  This wasn't a big downhill at all, but I was still nervous with the snow and turns.  The only time I ended up putting down a foot was on a sharper right turn.  I have a harder time with right turns than left for some reason.
The ride back to my car was a little colder because I was riding into the wind.  Luckily, it wasn't a bad wind at all.  The one thing I forgot to bring was sunglasses, so I had snowflakes flying into my face the whole time.   I was definitely more comfortable on the return trip, and I know I had a gigantic smile on my face because I was having so much fun.

I had a great time, but I'm definitely looking forward to getting out with the group on the 19th.  The one downside to riding my bike is that I never got around to running the 12 miles on my schedule, so I guess I'm doing that tomorrow.

And, naturally, snow is in the forecast. :)
Labels: frostbike snow team revolution winter