First off, I just wrote a book report on Battle Hymn of the Tiger Mother on my other blog.

Oh, my gosh.  Very readable, and sooo much to talk about, even if you may hate the author before you're finished.  I expected to, but I ended up finding a lot to think about and agree with.

I'm on day three of a snow-cation.  We had warnings of the snowpocalypse, but it ended up being pretty snowverrated for the St. Louis area.  I was a little disappointed, but I'm glad I didn't have to do some of the shoveling my friends did! 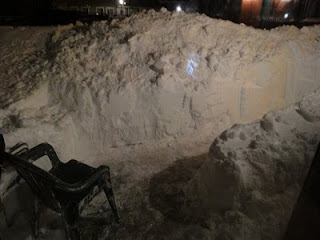 That's what my Chicago-area friends got to do on their snow days.  Yikes!  We, on the other hand, had freezing rain all night Monday night (thankfully not bad until after I got home).  I had opted to sleep in Monday morning rather than run my scheduled two miles, and I felt pretty hopeful about squeezing it in after work, but by the time I picked up J from school it was raining pretty hard.  Oh, well.

Tuesday we got about 2-3 inches of sleet on top of the ice.  The only time I even left the house was to take the dog out.  Otherwise, we hung out inside all day.

﻿ ﻿ The boys were all thrilled to do their homework and do some room cleaning.  We were off again Wednesday, and I'm glad for it because no snow plow touched our street until that late morning.  Shoveling our driveway was a rare treat, let me tell you! I started the cars and worked on excavating them from their ice coating while the boys chipped away at the driveway.  If you've never cleared 3 inches of sleet from a driveway, it's pretty much like scraping off your windshield...only way bigger.  Great upper body workout!


I think there were a lot of roads looking worse than that, though, because we were called off school again today.  Windchils of -24 didn't help, either.  The district we live in includes a lot of smaller towns, so they worry about the buses getting to the kids on the rural routes in a timely manner when it's that cold.  So, at best we'll have a 2-day week.  It's weird, too, because as much as I love my job, I get sooo excited when we have a snow day.  Three...that's a big treat!

And what have we accomplished?  Ummm....not much.  A little cleaning, cut J's hair, boys cleaned their rooms, I've improved my Lego Indiana Jones Wii skills a bit (I'm now "not bad for you, Mommy", according to my 7 year old), and watched a few movies with the boys.  It's not too often I get to hang out with my older boys just the three of us, so while Jeff's out of town I've enjoyed it.  We watched Zombieland Tuesday night.  Soooo not my type of movie, but once we got past the gory beginning, I have to admit that I loved it!  Last night I watched The Proposal

with N...much more my speed.  :)  We also have done quite a few puzzles together.

All in all, it's been some nice family time, and it's going to keep me from feeling too guilty if I go ahead and do the mountain bike ride I've been toying with this weekend.  I'm not sure I'll make it out there.  It's cold, and I really need to get a new bike rack--it would be a real shame to drop my new bike on the interstate.  Plus, I've got 12 miles scheduled for the weekend, though it wouldn't bother me to do that between church and the Super Bowl.

I'll talk to the ride leader about it tonight at the class I'm going to on bike maintenance.  Hopefully it's bike maintenance for dummies, because that's about my speed.  Maybe by this summer I can just play dumb girl when I have a bike problem instead of actually being one!

Anyway, good luck to those who're running this weekend, and stay warm to those of you who were hit by the blizzard!
Labels: being lazy snow day