LBL on the horzion

Not so very long ago, I brought you the exciting news of my adoption into the Team Virtus family, and now our first race together looms large on the horizon.  Seeing as you'll be hearing even more about them, I thought I'd introduce you to my teammates for the LBL Challenge Adventure Race.  Because I have little room in my brain for anything that isn't obsessing over the race, I took the liberty of stealing the blurbs from the always entertaining Virtus blog, but I've been assured that it's ok because now it's my blog, too.

First up is Bob, who I first met last March at the Deuce.  Since then we've gotten to bike together a few times and hang out before and after the last couple adventure races (and I guess during, too, at times). 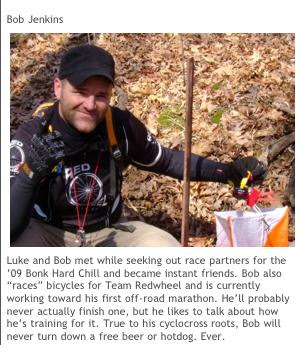 Then, there's Casey, who I finally got to meet in person at September's Berryman after months of commenting on his blog posts...and titles (or Luke's titles, depending on who you believe)...and spelling... 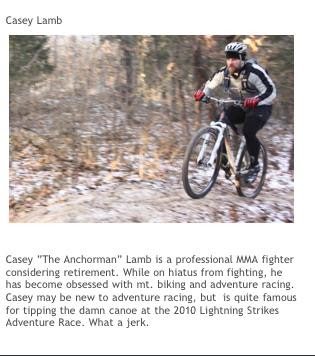 And, finally (alphabetically, anyway), there's Luke.  I first met him last February at the Castlewood Cup 15K, and then he was my tour guide to the wonderful world of maps at the Deuce.  He's also had the dubious pleasure of biking with me, most notably taking one for the team by being my partner in the Tall Oak Challenge. 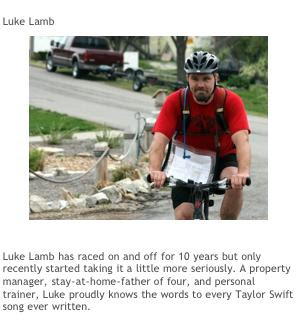 I still am kind of pinching myself that I get to race with this team, some of the nicest, funniest, hairiest people I know (and that goes for the whole Virtus team, not just the ones I'm racing with this weekend). I have some awesome local friends who have their own adventure racing team, so it's really nice to have a team where I belong (and even have my own Tenacious D-inspired nickname!) rather than having to sit around and hope somebody needs a teammate.

LBL will be my first 24-hour adventure race.  The website tells us our race "will consist of 40-60 miles of mountain biking on paved and gravel roads, jeep roads and single track trails; running, trekking and bushwhacking 15-30 miles and paddling 15-25 miles".  The course is unmarked and teams navigate with a map and compass to checkpoints located along the way.  Teams with the most checkpoints in the least amount of time win.
We leave in two days for Tennessee.   Two days.  It should come as no surprise to anyone who reads my blog that I'm practically peeing my pants with excitement.  I've spent the last two weeks daydreaming constantly about the race, getting my gear together, obsessively checking the weather forecast, and doing my best to not email the guys 10,000 emails a day about how many minutes until the race.  Thank goodness for the teaching job that demands my attention.  While my kids are in the classroom, I'm focused on them (except for when they ask me about the race) and can give my system a brief respite from the adrenaline surge.

The guys aren't much better, though.  Luke sends us regular countdowns while looking into paddle options and trying to corral the other three of us into making decisions, Bob is reading race reports from previous LBLs and staring at maps trying to guess how we'll start, and Casey is researching the canoes it looks like we may use (rereading the blurb under his picture might give you a hint why).  A quick look at my email shows at least 28 LBL-related emails in the past week, and that doesn't count my responses or anything I may have deleted.

As is typical for me as a race looms near, I'm transitioning from simple excitement to bipolar mood swings between hyperactive puppy and hyperventilation.  What am I nervous about?
I'm not really worried worried about all this stuff.  I know there will be times that it's wonderful and times that it's awful, but through it all will be the joy of doing something big in a cool place with awesome people.  Bonkhard Racing puts on fantastic races, I'm looking forward to meeting some new friends in person, and I completely trust and enjoy my team.  I guarantee we'll have more fun than anyone else out there.

Unfortunately, once again there's no online coverage for you all to be able to check in and see how we're doing, but I'll update the SuperKate facebook page/twitter if I can or you can follow @teamvirtus on twitter or "like" Team Virtus on facebook.