So we hadn't exactly gotten off to a smooth start, and I was blaming myself a little.  I mean, what was different about this race? Having a girl along.  Even though I knew it was silly and didn't really (entirely) think the guys would see it this way, part of me feared they were all thinking this coed experiment was clearly a bad idea.  They're never going to want to race with me again...

Despite the negative self-talk, which I kept working to push down (and the numerous grandma jokes that are an inevitable part of being the oldest on the team), I was having a blast.   Physically I felt great, and we had all been looking forward to the race for so long that we were determined to savor it. 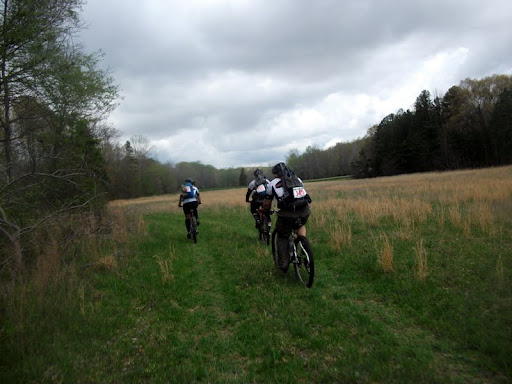 One of the cool things about an adventure race is that often, no matter how much you may dislike the next mode of transportation (I'm talking to you, paddling), you're ready for the change by the time you get there.  LBL was different.  Gary, the race director, did a great job of breaking up the different legs.  I was never desperate to move on to the next thing.  Even so, by the time we rolled into the canoe transition, I was almost glad to be paddling.

It wasn't a particularly quick transition.  We all grabbed a little food and changed out of bike shoes.  While the guys were assembling their kayak paddles (you were allowed to bring your own paddles but had to carry them throughout the race), I took the opportunity to use the bathroom.  I climbed up a hill so I'd be out of sight, but when I got to the top I realized I'd basically just given most of the canoe beach a better view of me...but you know, everyone is busy doing their own thing, so it wasn't a big concern.

I did spend much of the race envious of the guys' ability to pee right off the side of the road (or while walking).  Though Bob was kind enough to pick me up my very own Go Girl at Gander Mountain, I wasn't really interested in field testing it in a situation where a misfire would leave me stewing in my own pee for the next 20 hours.  I'll make sure and try it out, since I know you're all dying to find out how it works.

The pre-race info had indicated that we should be prepared to carry bikes in the canoes, but thankfully that ended up not being necessary.  Bob and Casey were in one canoe, and Luke was stuck with me in the other.  He had the double disadvantage of my lack of upper body strength combined with the fact that I didn't have a kayak paddle, so basically he was paddling two strokes for every one of mine.  We were forever pushing to keep anywhere near the other guys.

The weather to this point had been pretty fabulous, but as we put in at the lake dark clouds were looming.  Luckily the wind was pretty negligible, and we made good time to our first canoe checkpoint.  There was some discussion among other teams whether we were at 9, 10, or 11, but Luke had us right where we were supposed to be, and after punching 10 we headed to 9, which was located on an island.  Very cool.

I think it was on the way to CP11 when I almost flipped the canoe.  I had turned to reach into my pack behind me for a drink, and I don't know if a wave hit us or I leaned too far or what, but the canoe tipped so far that the side was at water level.  Somehow we managed not to go in.  "WHAT was that?!?" Luke asked, clearly wondering how the hell he let himself get stuck in a canoe with someone who can't even sit right.


So far on the paddle the weather had held, and the water in the cove for CP11 was super calm.  As we made our way back into the main body of Lake Barkley, though, things started to get ugly.  The wind picked up to the point that there were whitecaps on the lake, and our canoe was doing a good imitation of a small roller coaster.  The waves made paddling a challenge: sometimes you'd dip your paddle into nothing, sometimes the water was there way early, and sometimes I just had to take a breath and mentally hold on as the canoe dropped down yet another wave.  I wasn't scared, but I was really, really ready to get off the lake...preferably without swimming.

We had a short bike ride to the next trekking section, a 13-point rogaine that looked difficult to say the least.  The suspicion was confirmed when, despite our very slow start, we saw four of the top 5 teams either while we were at transition or in the woods. "How was it?" one of the guys asked Wedali (eventual 3rd place finishers) as they came in from the trek. 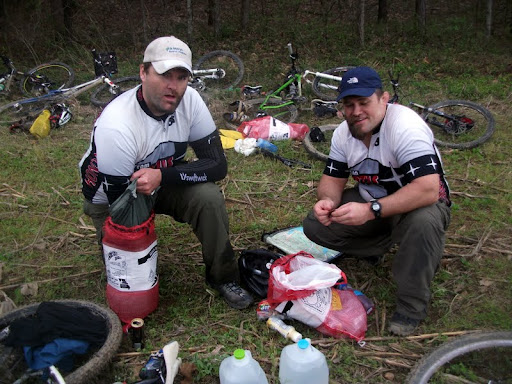 We all got something to eat and drink and took the opportunity to refill water bottles and packs.  I changed from my bike shorts into trekking shorts in the hopes of avoiding chafing, using Casey as my wall to change behind.

At this point, it was around 4:30-5.  There was a 9:00 cut-off for this section of the race.  Given the difficulty the elite teams were having, not to mention our own struggles, we discussed going out for three CPs and then re-evaluating.  The general feeling was that we might be better banking time for later legs rather than taking every possible minute on the rogaine.

We had a terrible time finding the first CP we went after.  Luke was really struggling with the map, and we ended up in the wrong area.  Watching as the guys checked the directions of reentrants and spurs to help confirm we weren't where we thought we were was a great learning experience for me.  At the same time, I felt a little bad because I was absolutely no help.  I'd like to be able to offer more than a sunny disposition.

With the first CP found and Luke off his game, Bob offered to take the map for a while.  This is another cool thing about the team.  Rather than feel threatened or annoyed, Luke was all for it, and when Bob proceeded to lead us to the next two CPs, Luke was the happiest one for him.

Our three CPs found, we headed back to the transition area, a hike that ended up taking nearly an hour.  We packed up the remaining food and gear from our drop bags and changed into some warmer clothes for the nighttime bike leg.  It was after 8:00, we'd now been racing for over 12 hours, and I still felt good.  In fact, I remember thinking that we still had at least 12 hours left and being glad.  I was loving every minute of the race and was nowhere near ready for it to be over.

But night was falling, I was closing in on my longest race time to date, and we still had a long way to go.