It's no secret that my training has been anemic this summer, basically consisting of big bike race, recover, big bike race, recover, little bike race. In this instance, "recover" can pretty much be understood as "sit on your ass and do nothing". That can only last so long before it turns into habit and your couch cushion has an ever-widening impression from the butt planted on it. Luckily, a combination of a big race upcoming race and active friends has finally gotten me moving again.

The race is a huge motivator. Luke, Bob, and I are competing in the 24-hour Thunder Rolls adventure race. The guys' frequent posting about their training has motivated me to get back on it and catch up with them. After being in pretty good shape when we raced at LBL in March, I really don't want to be the weak link here. Well, I don't want to be the weak link on the trek; I always am on the bike, and this race features a ropes course that is destined to have me in full internal-freak out mode...I'm just going to have to assume my Kage persona on the ropes. Definitely don't want to let my team down.

I ran twice last week with friends and did one road ride. Following that up with Saturday's Tour de Donut netted me a total of about 61 miles for the week. Both days on the road bike I had some pretty significant hip/thigh discomfort, so I need to figure out if that's just lack of training, a bike fit issue, or something else.

Sunday we played a couple hours of sand volleyball, and thanks to the insanely hot temperatures around here, the 95 degree weather felt perfectly comfortable. The heat was back during the week, though...we're seeing plenty of triple-digit temps this summer.

During Nathan's three hour of volleyball camp in St. Louis on Monday, J and I just hung out at Castlewood Park until it was time to pick him up. 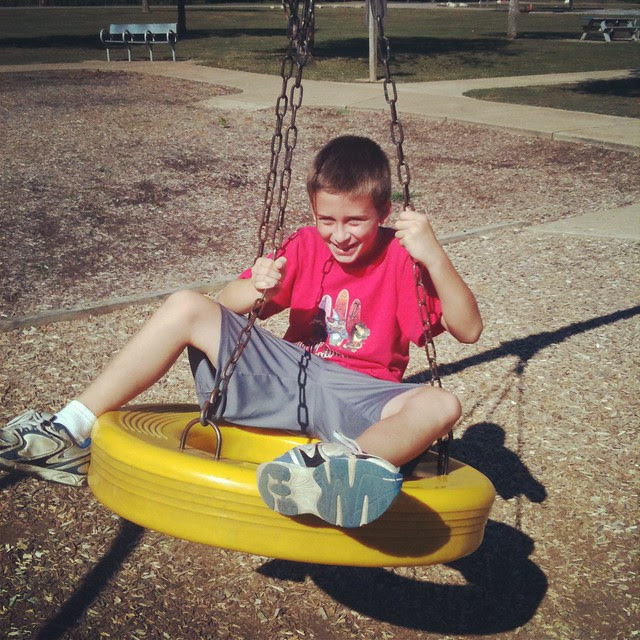 We played for a while at the playground... 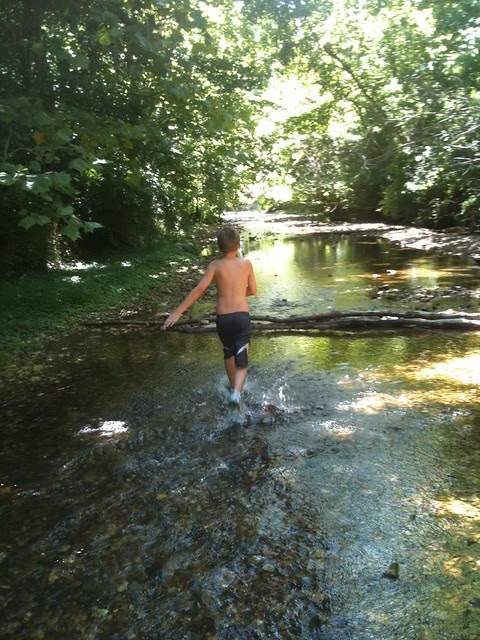 And then decided to hike in the creek, which was WAY more fun... 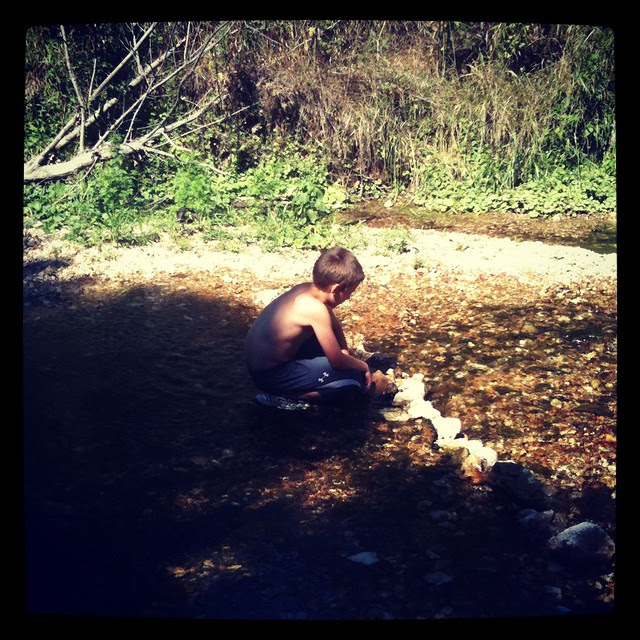 ...And spent some time building a dam, which I enjoyed at least as much as he did. :)

If Monday was a total kid day, Tuesday was all mine. Team Virtus & friends have a regular training day, aptly titled Virtuesday. Every week I jealously watch the facebook posts about what's going on, but since they're 2.5 hours away from me, it's hard to get away. This Tuesday, I was free and determined not to miss out. After some juggling to get a babysitter for J (big thanks to my mom and Daniel's girlfriend who watched him!) to save me two extra hours of driving between home and N's camp, I loaded up my car with my mountain bike and running clothes.

My afternoon plans kind of fell through, so I had an 8-hour gap to fill between dropping off Nathan at his girlfriend's and meeting the guys. Being close to some great St. Charles County parks, I decided to hit up a couple of my favorites to run and ride. In retrospect, considering my lack of regular training and the 105 degree temperature, that was perhaps a little overambitious; regardless (or is that irregardless? :D), I started at Broemmelsiek Park.

Since I was already dressed in running clothes and haven't been at the park since November, I opted to get the lay of the land by foot. The singletrack is a mixture of dirt and rock trails through woods and a couple long stretches through restored prairie.


While "prairie" might conjure images of Laura Ingalls (or Melissa Gilbert) joyfully running down a grassy hill with her bonnet flying behind her, a more accurate image for my run would feature someone in tattered clothes crawling across blistering desert sands without even a cactus for shade. 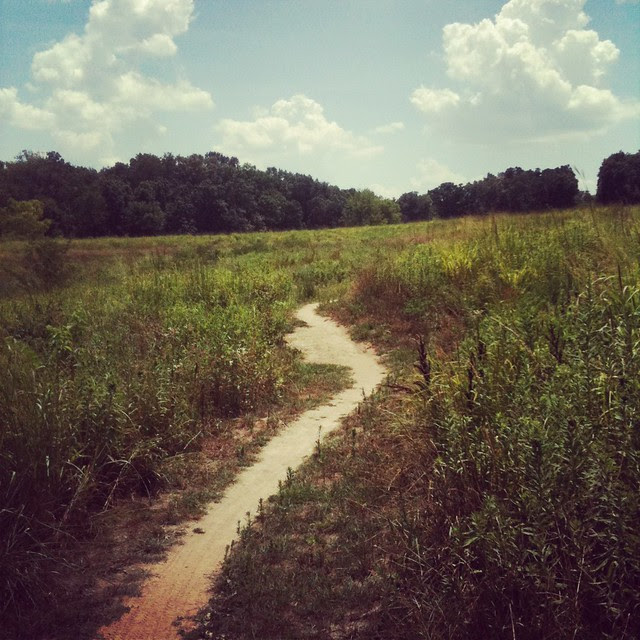 Beautiful? Yes.
Hot? Oh. my. gosh.
Because it was so hot, I just ran when I could and walked when I needed to. It was a very low pressure run, which actually made it a lot of fun, even though I only made it about .5 miles before I tripped on a rock.
﻿
﻿My pace dropped even more drastically, not because I was so hurt, but because I naturally had to update facebook with this turn of events. Eventually my dead walk changed back to run/walk, and I managed to slog through 6 miles (big thanks to the mountain biker who shared his huge jug of ice water with me!). Because falling had reminded me why I don't mountain bike alone, rather than change clothes and head out on the bike, I changed clothes and headed to QuikTrip for a smoothie.

1.5 hours of driving later, I grabbed a new book and ate a slow dinner in Jeff City, savoring the air conditioning as long as I could before heading to Binder Lake to wait for the guys. By 9 or so, Luke, Bob, Jim, Stoney, Aaron, and I had our headlamps on and were ready* to head out on the trails.

The guys were ready; I was dreading the ride. Neither of my two previous night rides have been great experiences, with falls and large amounts of walking. I wanted nothing so much as to climb back into my car and read until the guys got back from the trails, but who drives halfway across a state to not train? I started pedaling.

Most of the guys shot off down the trail, stopping occasionally to regroup. Luke was nice enough to hang back with me, and having his light to follow (not to mention company) was a huge help. Other than being terribly, painfully slow, the ride was surprisingly good. Hopefully what Luke lost in time he made up in entertainment value as he got to listen to me freak out, cursing my way across the bridge sections I had forgotten from last year's Tall Oak. I'm sure my tire tracks wobbled like a drunken sailor, but I somehow managed not to fall off.

I walked a couple of hills where I had to put down a foot and then couldn't get going again, but though I skirted the first two log piles (surprise! there's a log pile in the trail!), I rode over the last one no problem. We got back to the cars at about 11 p.m., and I had a text from Jeff: "Are you still there?" Not only was I still there, but we still had the canoe ahead of us. I'd told him I'd be late, but clearly my late and his are a little different. :)

Since the guys' "3 in a canoe" experiences have been...well...mixed, we all wanted to see how this would go before Thunder Rolls. Bob and I carried the canoe to the lake while Luke hid in the bathroom brought the paddles, and I think we all realized at the same time that there was no third seat in the canoe. I volunteered to take the middle, but the guys pulled the chivalry card (this only girl thing is a pretty sweet gig, even if it doesn't get me out of carrying the canoe), and Luke ended up in the middle. Thank goodness, because my MawMaw knees would have been unhappy even before falling on them earlier in the day.

This was my first time using a kayak paddle, and it was ok. Seemed like I was throwing water all over myself...little did I know it was going to get much wetter. We crossed the lake pretty quickly, talking about past and future races as bats swooped around us, which was very cool, and passing fairly close to a blue heron (?). I'm no fan of canoeing, but it would be hard not to enjoy a nighttime paddle with such good company.

Fun or not, I still had about 3 hours of driving ahead of me since I had to pick up Nathan on the way home, so we headed back towards shore. As we neared the beach, someone brought up headlamps, and Bob asked me how much mine cost. "Around $30?" I guessed, and he replied that he could handle that. It was kind of a weird conversation since the guys have way better headlamps than I do, but my slight confusion was interrupted as Bob uttered the phrase that will live in infamy:

I had just enough time to think Huh? before the canoe flipped and I was underwater. The guys were laughing their asses off, having planned this earlier in the day (even going so far as to make sure I brought extra clothes because I was "gonna sweat half to death"). The lake water actually felt really good, and hopefully now it'll be smooth sailing in the actual race. We swam the canoe to the shore, carried it to the cars, and talked racing for a while. I finally changed into dry clothes and headed home sometime after 1, reeking of lake water.

I got home around 4 a.m. and had three hours of sleep before having to wake the boys and get Nathan to volleyball camp, and I was seriously dragging until I finally got a long nap after lunch.