Kicks in the Sticks trail race 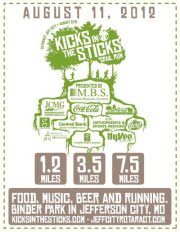 A month or so ago, Friend of Team Virtus Stoney posted about an upcoming trail race at Binder Lake Park in Jefferson City.  The Rotaract Kicks in the Sticks trail race offered a 1.2 mile fun walk as well as 3.5 and 7.5 mile race options.  I've mountain biked at Binder Lake a few times, and every time I ride there I think what a great trail it would be to run.  Even so, a 5 hour round trip drive for a relatively short race makes for a pretty lopsided drive:race ratio, and that combined with the chafing from last week's run left me undecided all this week.

In the end, my leg had healed up enough by Saturday that I couldn't resist the chance to combine a training run with some time hanging out with friends.  The fact that the race was for a good cause was just the icing on the cake.  It was a fundraiser, in part, for the HALO Learning Center, which "provides art therapy and educational workshops for foster and at-risk children in the Jefferson City area.  Kids from HALO made the winners' medals, which was a very cool touch.

Kicks in the Sticks was a race and party all in one. Live music before, during, and after, which made for a great atmosphere.  I met up with my blog friend Christina and her friend Susan as well as Virtus teammate Bob and his lovely fiancee Cara.  I guess the rest of the team was busy painting their nails or something. :)

I guess to go along with the party vibe, the race had a 6 p.m. start.  It was nice to get to sleep in, but the evening start meant running in 85 degrees instead of Saturday morning's 60-something temperatures.  While that's 20 degrees cooler than we've come to expect this summer, it still wasn't fun.

With this year's Kicks in the Sticks being the inaugural event, attendance was decent but not overwheming.  The 7.5 milers got the first start, and I lined up about mid-pack.
I expected the first mile or two to be tough, and they were.  I tried to focus on going easy, but my first mile was under 11 minutes...which wasn't an easy pace for me.  By the first mile marker, most of the people who'd been behind me had passed me by.  I'd catch sight of them ahead of me as the trail twisted and turned, but I only re-passed two people.

Above, I referenced the first mile marker.  As tough as the first mile felt, I was pretty surprised by how quickly I came across the mile marker, and my Garmin was just as surprised.  It showed that I'd run less that 8 tenths of a mile.  Each subsequent mile marker was off according to my Garmin as well, to the point where by mile "7" my watch registered 6 miles.

I have to say, I wasn't all that heartbroken by the short course. My lack of training this summer has been well documented, so I went into the race knowing that I was going to struggle, but I felt weirdly bad during the run.  My legs felt weak, my breathing was all over the place, and I spent much of the race feeling like I was on the verge of vomiting...despite an effort level that didn't seem at all puke-worthy.
I spent the second half of the race walking pretty much any uphill and even some flats towards the end, running again on downhills and when my breathing got back under a pant.  When I reached the aforementioned "mile 7" I was energized by the knowledge that I only had half a mile left to run (really, probably less than that since all the mile markers had been significantly off).  I stepped up my pace a little, managed to pick off a father/daughter duo who had passed me near the beginning, and pushed on.

Finally I saw the finish line ahead of me and pushed as hard as I could to the end.  1.1 miles after the 7-mile marker, I crossed the finish line to the cheers of race staff and my friends Bob, Cara, and Stoney. Big thanks to them for waiting around for me!
Once I caught my breath, I asked Stoney (who in addition to kicking my butt on the trail race, finished Dirty Kanza on a singlespeed in 15 hours...10th place in the singlespeed division) the question I'd been pondering since watching him cruise out of sight before I hit the treeline: "Is there anything you're not good at?"

We had some beers and cheered in Christina and Susan, who finished their first trail race looking strong.  Everybody else grabbed some food, but while the bean/salsa stuff and curried chicken croissants sounded good in theory, they weren't appealing given the iffy state of my stomach.  We hung out, clapped for the winners, and listened to music for a while, but eventually I had to head back home.  It was definitely a good time, and despite the drive I think I'll be back next year.

The good:
Things I hope will be different next year:
As for me, it's hard to know exactly where to pin the blame for feeling so crappy on the run.  Not having trained consistently of course is huge and makes it hard to judge whether other things also came into play.  There are a couple other possible contributors, though.