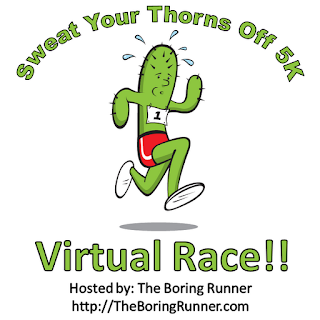 Last year's SYTO5K yielded one of my favorite race reports EVER, mostly because it was a complete work of fiction.  This year, lacking a photoshop victim, I actually had to do the running.  That's ok, though, because I just signed up for this crazy 30K trail race again, and I doubt I've run 18 miles in a week over the entire summer.  I ran a total of 3 miles in June.  It's definitely time to start training again, so when Chuck and Robin had a 2.5 hour run on their ironman plan, I was glad to join them.

Robin picked me up at 5:50, and we headed to Lost Valley after our obligatory Quik Trip stop.  The sky was looking pretty ominous with dark cloud and the occasional flash of lightning, but rather than feel worried we were hopeful.  The temperature was at 80 by 5 a.m., and if Mother Nature didn't help us out we'd be running in a sauna.
By the time we met up with Chuck, Lori, and Jacob, the rain was looking like a sure thing, so I opted to leave my Garmin in the car.  Despite its having survived one complete drenching in an "accidental" canoe tipping, I didn't want to take any chances.  We started off on the Hamburg Trail, a flat doubletrack the will eventually take you to the Katy Trail.  By the time we'd made it a mile, I was feeling pretty sure I might die and wondering what made me think a 2.5 hour run was a good idea...but I'd warned my friends how out of shape I was, so if they ended up dragging my dead body out of the valley they couldn't claim to be too suprised.  Still, it was pretty disheartening when I was walking a short stretch only 1.5 miles in.


Luckily, we came to the gravel downhill that terrifies me on the bike.  It's much more manageable on foot, especially when you walk most of it. :)  From there it was another doubletrack stretch and then finally onto the singletrack.  I really love running at Lost Valley.  Most of the hills aren't too bad, and there's a lot of rolling terrain and rocks to keep things interesting. Being without my Garmin made me feel a little bit like a kid on vacation.  What time is it? How far have we run? Are we there yet? The questions would bubble up, but I resisted asking and just kept running (and walking when I needed to).  The rain had started about the same time as we'd hit the singletrack, but in most places the parched ground just soaked it up instantaneously.  You'd never have guessed it had rained on some parts of the trail.  In other areas, though, rain mixed with the thick layer of dust to leave a slimy coating of mud to slide us around the corners.

I'm seriously out of endurance mode, because while Chuck and Robin steadily maintained their easy run pace, even with slowing down more I had to occasionally stop and walk.  The longer we ran, though, the better running started to feel.  I was catching glimpses of what it's like to enjoy running again.

At the same time, I was also learning what it would feel like to take a power sander to your inner thighs.  I hadn't been able to find my Body Glide before I left, so I'd used some powder instead.  So not the same.  Between sweat and the rain, every bit of me was soaked, and between soggy shorts and chubby thighs, I was developing some uncomfortable chafing. 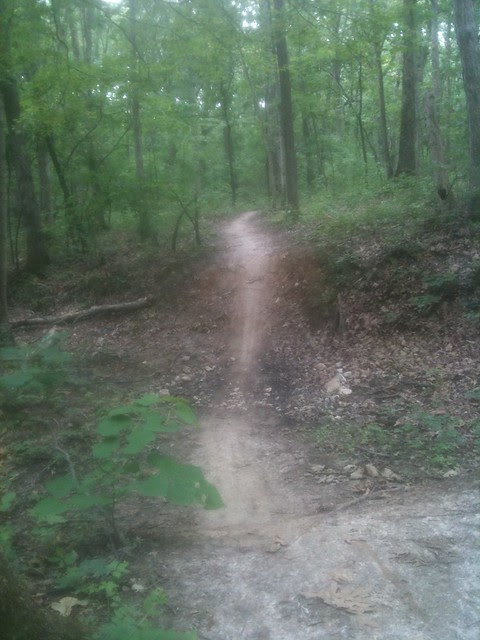 Rather than run the whole 2.5 hours, I opted to head back to the car once we got off the singletrack.  While Robin was getting out her car key for me, I looked down to see blood running down my legs.  Ew.  Chuck and Robin ran off one direction, and I went the shorter way...which was still a couple miles.  I ran until the turn and then stopped to check out the damage.  Both of my thighs were chafed so badly that they were bleeding.  There was nothing to do but go on, and walking hurt just as much as running, so I started running again.

It felt so right.

It was so weird: ten miles into my first double-digit run since last November, legs raw and bleeding, I was running faster and stronger than in ages.  Of course, it only lasted for a while, but what a great feeling.  All that joy of running stuff aside, I was really, really glad to get back to the car, change into some dry clothes, and inspect the damage.  My just-over-12-mile run took me around 3 hours.

I spent the rest of the day lying on the couch and trying to keep anything from touching my leg, and you can bet I'm going to stock up on the Body Glide...and maybe wear compression shorts under my running shorts from now on or until I lose some weight.  This is ridiculous.

So I somehow got lost on the way to the  Sweat Your Thorns Off 5K and ended up at the Turn Your Thighs to Hamburger 20K, but the bigger news is I ran 12 miles!!  And other than my chafing, I feel great today...and even better, that November 30K is seeming eminently do-able.  That's a win in my book.
Labels: chafing Lost Valley sweat your thorns off 5k the boring runner trail running virtual race