I ran my first half marathon back in 2010.  At the time, I'd been running for 8 months.  I trained faithfully, missing maybe one workout of the 14-week training plan, and was delighted when I met my pie-in-the-sky goal and finished in 1:58:37.

Not long after that, I joined our tri club and was consumed by the adventure side of things.  I did run one marathon, but the majority of my races since then have been off-road events.  Between the tougher terrain and so many new types of distraction from running, my average paces have rarely looked similar to the 9:03 pace at that first half.  Still, I've wondered if I could improve on that time, and when some friends decided to sign up for the MO' Cowbell, I decided to find out what I could do with solid training and three years' more experience.

Of course, the solid training didn't happen, but last Saturday's long run gave me hope that the half wouldn't be as disastrous as I'd feared.  Based on my ability to maintain a 11:46 pace over 12 miles of trails, I figured that 2:15 was a pretty likely finishing time, and given my recent lack of training I'd have been satisfied with that.  To be perfectly honest, I thought another sub-2 finish was an outside possibility but highly unlikely.

Packet pickup Friday was super smooth, and I finally scored the salted caramel GU I've been hearing so much about and picked up a foam roller.  The race shirt offered a woman's cut; it's cute and unlike most running shirts is actually long enough for me.  Unfortunately, it's white and see through. 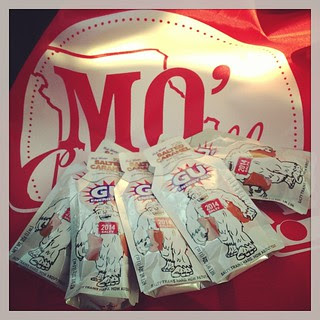 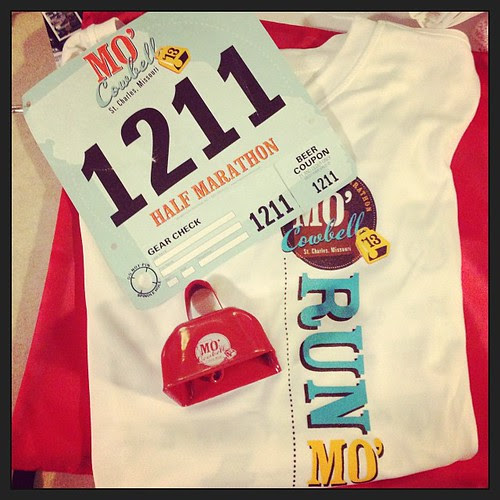 Jeff, Jacob, and I spent Saturday morning at Take a Kid Mountain Biking day (more on that later in the week) and then spent the afternoon at Six Flags.  Walking around an amusement park wasn't my first choice of what to do the day before a race, but I feel like I've barely seen my family lately. Besides, it's a little hypocritical to worry about walking around screwing up a race that I didn't bother to train well for anyway.  Luckily for me, the weather turned a little nasty, so we ended up getting home around 7:30 and I was in bed by 10.

Getting up at 4:30 sucks no matter when you go to bed, but since I had everything ready all I had to do was braid my hair and get dressed.  I still was slow getting out of the house, but the parking lot had lots of empty spaces when I got there at 6.  In a funny coincidence, I ended up parking right next to my sometimes-teammate Adam and his girlfriend Michelle.  After enjoying our warm cars for a little longer, we headed over towards the start (and the bathrooms).

At 54 degrees, it was chilly standing around but great running weather.  I was glad to be wearing a throw-away sweatshirt over my tank top.  Adam and I took the requisite Team Virtus "where's everybody else" picture and then settled on our spots in the corrals.

Actually, my friend Mickey took the picture on his way through the corral.  He was pacing a friend of his to a sub-2 finish, and I'd considered lining up with them to see how things went.  In the end, I decided to start further back, figuring that not being able to keep up might mess with my head more than running on my own.  My plan was to run a comfortably fast pace and see how things went, and since fast for me is around 9 min miles, I lined up towards the back of that corral.

I wasn't nervous, but I was wondering what the heck made me think this was a good idea.  I got to visit for a minute before the start with my friend Bill, who was running the 5K, and then I stood trying to find an effective windblock while I shivered without my sweatshirt.  These skinny runner guys don't provide much protection from the wind.

The race started right on time, and it took me a little over a minute to get to the start line.  In retrospect, I probably should have put myself further up in the corral because once we got going I definitely had to do some weaving to get past slower people.  Still, my first mile chimed in at a very comfortable 9 min/mi, and the next six miles were all under that.  Barely under that, but the strong first half was giving me hope that maybe sub-2 was attainable.  Every time I looked at my Garmin (all too often), I was doing the math, and by mile 7 I'd banked about a 30 second cushion.

Some things were starting to work against me by this point, though.  First, I always carry a water bottle.  Always.  Even if I'm running 2 miles, I carry a water bottle.  I like to be able to drink when I want to.  Today I only brought one water bottle, filled with Spark, and when it was empty I threw it away instead of looking for somewhere to refill it.  No big deal...there were plenty of water stops on the route.  And there were, but they weren't super evenly spaced, leaving me to go longer than I wanted without water and, often as not, spilling it all over myself as I tried to drink from the cup while running.

The bigger problem was fuel.  I'd misread the website and thought that there were two stations with GU.  Of course, I hadn't read it that carefully because I had my brand new, super delicious salted caramel GU and could eat it whenever I wanted.  Except that it was in my car.  Breakfast, at 5:15, had been coffee and a packet of almonds, and then I'd eaten half of a cranberry muffin when I got to the race.  By mile 6 I was starting to seriously worry about bonking and had to keep reminding myself I was running strong and doing well.  I tend to get really negative with myself, but today I did a good job of keeping my self-talk positive and encouraging.

I was relieved to finally hit the fuel stop at mile 8 (which is kind of late in my opinion), but that vanilla GU didn't magically keep the wheels from starting to wobble, if not actually fall off.  This mile marked my return to miles in the 9's, where I stayed for a while.  Mile 8 - 9:09 (mild panic...I just lopped a chunk off my cushion); mile 9 - 9:04; mile 10, where the one uphill section of the course started -- 9:30.

After my strong first half I'd known that this 2-mile uphill was going to make or break my sub-2 hopes.  Now I know this little 100 foot elevation gain is barely a hill, but it was kicking my butt.  I felt a little sick watching as my pace dropped on my Garmin, but my time at the 10 mile mark was right at 90 minutes, just like in that first half.  I still had hope.

Mile 11 (ok, this is going to end and then it's downhill the whole way...) - 9:33.  Finally the hill ended and the sweet sweet downhill began.  Looking at my watch, I knew it was going to be close and I pushed as much as I could.  Mile 12 - 8:48.  The last mile flat out sucked.  It started with a downhill, but it was steep enough that it kind of hurt to run down it and I wasn't able to just let gravity take me and fly down.  I did get to see my friends Cheri and Bill at spots along that last mile, and it was nice to see familiar faces.  "So close!" I told Bill, meaning I was sooo close to finishing under two hours.  "You're almost there!  Just one more big turn!"

I tried to leave it all out there, knowing how much I'd hate it if I let up only to miss a sub-2 finish by a few seconds, but as I spotted the finish line I saw my watch change to 9:31 (it's not set to show total racing time, just miles, pace, and time).  It had taken me a minute to cross the start line and now I'd burned it.  I was disappointed, but not that disappointed.  I mean, I was hoping to finish around 2:15...how could I be upset at beating that by 15 minutes?

Except...as I got close enough to see the race clock, I realized it read 2:00:xx.  I'd started a minute after the clock...which meant...sub-2 was still in reach! And, in the end, I caught it.  1:59:41.  Not a PR, but close.  I may be a worse cross racer and mountain biker than I'd like to be, but I'm a much better runner than I deserve to be.  I imagine that's due in large part to the cross training my bikes give me, not to mention the friends who let me tag along behind them on the trails.  So I guess I owe special thanks this time to Mickey, who's gotten me out on the trails while my regular running partners are nursing calf injuries or spectating at their kids' sporting events.

Congratulations also to my super speedy friend Megan, who was second female overall in the 5K, and to all my other friends who raced at the Cowbell today. Way to go, Adam, Michelle, Scott B., Rachel, Susan, Sara, Mickey, Bill, John, Steph, Scott K, and Melissa!
Labels: cross training half marathon half marathon non training MO Cowbell half marathon not quite a PR race report running