Prelude to war...the birth of a bet

Last weekend a little war went down at Lake of the Ozarks State Park, our own Virtus Civil War...teammate vs. teammate, brother against brother (granted, we don't need to be on separate teams for that particular matchup). The North and the South had Fort Sumter, but Team Virtus - Clydesdale Edition (Bob and Casey) and The REAL Team Virtus (Kate and Luke) fired our opening salvos across the internetz.

Picture the scene.  Three days after our return from Thunder Rolls, Team Virtus (and friends) gathered around our computers for the Virtus League fantasy football draft.  I skillfully parlayed my 9th position in the draft into a 10th-best grade (though I'm currently sitting in fourth place *pats self on back*), and after the draft closed conversation continued on Facebook.  In a remarkably short time, we had our next race planned and just as quickly were discussing the terms of the newest bet.  Houston, we have a (gambling) problem. 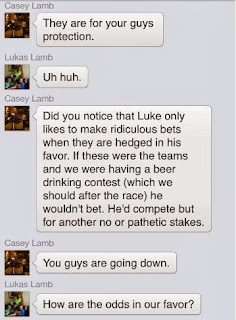 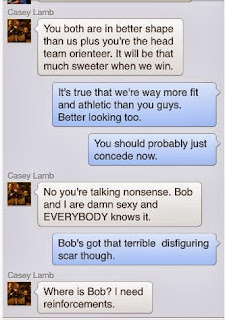 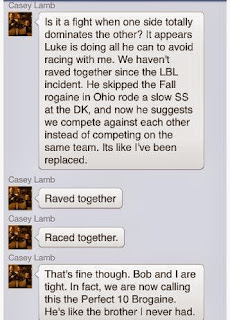 In the end, the terms of the bet were as follows: the losing team must perform a skit -- written by the winning team -- to be filmed and posted on the blog and youtube for eternal public humiliation.

Having a bet definitely motivated me to get out training more often, and I had a blast with all of the smack talk leading up to the race.  Neither Luke nor I were quite as confident as we let on, though.  Bob had been running pretty regularly, and Casey is a bit of a machine when he's determined.  We thought we could beat them, but we knew that anything could happen.
Labels: BonkHard Racing Perfect 10 Rogaine prerace reports Team Virtus Team Virtus has a betting problem