Bikes on the brain (gravel edition)

The thing about a long weekend, especially once where my family is otherwise occupied, is that I get greedy. This whole endurance sports thing is still new enough to me that there's a real kid-in-a-candy-store vibe to it. I want to do all the rides. And all the races.

Because of this, even though there was a very real possibility certainty that I'd be wiped out from riding Berryman, I couldn't resist the opportunity to do the Joe Dirt ride the following day.  How could I?? They were practically in the same town!  And it was gravel. And hilly.  Both things I'm going to need lots of practice with before Dirty Kanza.

I was wiped out Saturday evening, but after ten hours (ten hours!!) of sleep I woke up Sunday morning feeling pretty good and surprisingly not sore.  Joe Dirt didn't start until noon, which gave me a weirdly relaxed morning to pack up and mess around on the laptop for a while (OK, I started the Berryman ride report) before a big breakfast at the nearby Spare Rib Inn.

We had around 45 minutes to make the 15 minute drive to the ride. The excess of time ended up being a good thing due -- allegedly -- to my poor navigation.  And hey, I can totally see how "Stay on Hwy 8" could be a complicated direction, especially since the turn was unsigned.


My dad was always a fan of the scenic route, though, so I have an appreciation for the long way there, and to be fair our little detour gave me the opportunity to realize I'd left my favorite hat back at the restaurant.  We had time to swing by, get it, and still arrive in plenty of time to get a parking spot in the packed lot and gear up before the noon roll-out.  There was plenty of socializing to be done, too, since there were friends getting ready everywhere.  Luckily I'd sorted everything out before brunch and didn't have much to do other than change shoes, throw on my pack, and deliberate over taking my jacket.

The ride was two loops of a hilly 23-mile route.  Knowing I'd be even slower than normal I'd put myself near the back of the group, but that wasn't quite far enough because most everyone behind me as well as people starting late quickly passed me by.  Within a few pedal strokes my legs reminded me they'd already ridden this weekend; they didn't hurt, but they were pretty dead.  The route, however, was an awesome distraction.  So pretty.

The gravel roads were in fantastic shape for the most part, solid enough that it was almost like riding on pavement.  I was a little distressed by the amount of effort it took to ride slowly in a fairly low gear on level ground and disheartened when I rounded a curve and saw the first big hill stretched in front of me.  Shifting down to my second-lowest gear, I started to grind my way up.  I could see my friend Lisa in front of me sailing up the hill, but when a guy in front of me got off and started walking my brain flipped a switch and decided it was time for me to walk too.

Eventually I started riding again, so at least I wasn't pushing my bike when I caught up to where Mickey was waiting.  "Were you in your lowest gear?" he asked when I admitted having walked up.

"Well, my second-lowest," I answered.


Once I caught my breath I started obsessing about the upcoming downhill.  Never a confident descender, I'd been a little freaked out when I looked at the elevation profile in the car that morning (no moment like the last moment, right?) and saw two downhills that looked almost vertical.  It wasn't quite as bad as that, but I was heavy on the brakes as I crept down, only to face a steep uphill once I hit bottom.

I actually rode up the next two big hills (in my lowest gear).  I probably could have walked them faster, but I keep being reminded that you don't get better at riding hills by walking them, and I'm trying to take that advice to heart.  After summitting hill two, inordinately proud of myself for not giving up and walking, I considered the difference in gearing.  Finally catching up again with Mickey (and you should understand that by "catching up" I mean he either waited or turned around and rode back my way, not that I actually caught up), I commented, "I know this is probably a stupid thing to say, but it's amazing how much easier just one more gear makes."  Turns out that there's a bigger jump between the easiest two gears than the other ones.  Hmmm...you learn something new every day.  If only my new things weren't "Bicycling 101" material.

None of the downhills were terrifying, but at least one was kind of damp and rutted and made me pretty nervous.  I had to walk part of the fourth hill, but the last six or so miles was fairly mild and I was actually able to shift into my big ring for the first time all day and move at a decent pace.  The final downhill was a good one, smooth, slightly winding, and not super steep, and I let myself carry a little more speed than normal for part of it.  We pulled back into the parking lot after about 2 hours and 10 minutes, and I don't even want to think about how much faster Mickey could have ridden it if he wasn't waiting on me. 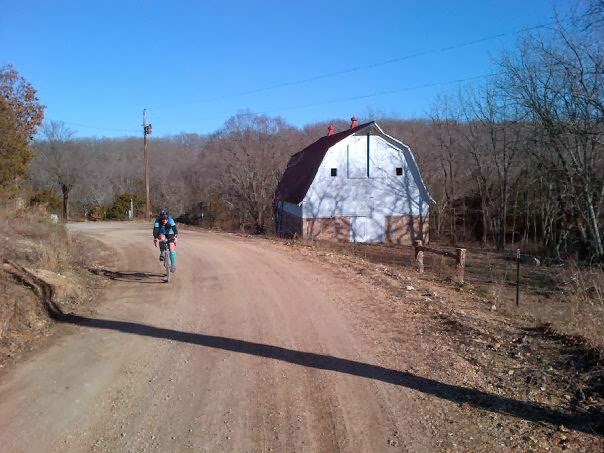 Overall, once the first few miles were out of the way I started feeling a little less terrible, but despite the fact that it's been a long time since 23 miles sounded like a big distance, the first loop seemed to take forever.  I'm sure that's largely because of all of the hills, but it was probably also part mental.  Knowing I have a tendency to let myself off the hook when things get difficult and having been thinking about bailing on the second loop pretty much since my first pedal strokes, I tried to frame the ride in terms of the whole distance (so when we were coming back to the parking lot after the first loop, I wasn't at the end of a loop; instead, I was at the halfway point of the ride).

Quite a few people opted not to go out again. To be honest, despite all my talk about wanting to be ready for Dirty Kanza, I'd have been one of them in the absence of peer pressure.  Knowing my company, I didn't even suggest skipping the rest of the ride, but I'd be lying if I said I didn't look enviously at the people relaxing in the parking lot.

All that said, the second loop seemed to go by much more quickly than the first.  The hills still sucked, and I only made it up one of the four without walking this time (giving me less than 50% for the ride, and a goal to target: by this summer I want to be able to ride all of the hills without walking), but counting down from 23 made it seem like the miles were flying by.  And make no mistake, I counted down almost every single mile.

A big advantage for me of a loop course is the increased familiarity the second time around.  I still wasn't screaming down the hills (well, I was on the inside), but I could go faster because I had a better idea of what to expect.  Of course, I still couldn't remember exactly where the uphills were (rounding a corner and cursing, "Oh, this *$%@ hill...") or how many of the big ones we'd already ridden (leaving me convinced we were finished with all of the bad climbs right until I rode up to the real last one...much of which I ended up walking).


The experience all paid off on the final downhill, though.  The last few miles are relatively flat with some rolling hills, and you can get going pretty fast.  Rather than brake as I started down the hill, I shifted into a harder gear and kept pedaling.  My bike picked up speed, and though typically anything about the low 20's scares me, I felt weirdly comfortable as I caught a glimpse of 30+ mph on my Garmin.  Rounding a curve, I saw 36 mph and still had time to go.  Maybe I can hit 40...I marveled, remembering last May when my fondest wish was to stay below 30 mph at Cedar Cross.  I don't even know who I am anymore...


My downhill bliss came to an abrupt end as a station wagon swung into the middle of the road in front of me.  Startled, I grabbed the brakes, we moved to our respective sides of the road, and I continued my descent a bit more cautiously.  We pulled into the nearly empty parking lot, loaded up the bikes, and headed out.  What a day.  What a weekend.

Of course, the weekend wasn't quite over yet. This was the Sunday of Martin Luther King weekend, after all, and I had bike plans with Chuck, Lori, and Patrick on Monday.  Plans, that is, that I'd decided to cancel.  I was way too tired to go mountain biking the next day; I knew how that ride would go and wasn't up to trying to ride on dead legs again.  Checking the weather app on my phone, though, I realized that the weather was going to force a gravel ride.  That I could do.

Getting up the next morning sucked, but it was well worth it.  One of my biggest weaknesses is lack of mental toughness, so it was good for me to be tired and sore and not want to get back on my bike (all things which are sure to happen in Kansas) and do it anyway.  Plus, it was a blast.  We had a fun, adventure-paced ride.  What does adventure-pace mean? Slow, with lots of stops to check out cool stuff.

All told, I finished the weekend with just shy of 100 miles on the bike, which sounds pretty good until you realize that would get me not quite to the second checkpoint (halfway point) at Dirty Kanza and that I have yet to ride into the third checkpoint.  I've got a long way to go.  Luckily, unlike the Bandit, I have a long time to get there, and with the awesome group of training partners I have around me, I'm going to enjoy (almost) every pedal stroke.
Labels: adventure airborne delta cx bicycling dirty kanza training gravel grinder Joe Dirt