Total races: 20
New things for 2013: training for a goal time (as opposed to just finishing), getting a cross bike

January: The year started with some snowy trail runs, but the story of the inaugural SHITR (Shivering Icy Trail Run) was one of really cold rain rather than the white stuff.  43 like-minded crazy people showed up to run a half marathon on the trails...in the dark.  Even though I spent much of the last 4 miles moving at a painful limp rather than running while being pelted by sleet, that race remains one of my favorites for the year.
The second-annual MLK ride at Berryman was kind of a disappointment due to my brakes disintegrating within the first few pedal strokes, but the Team Virtus road trip to Cleveland to celebrate Bob's upcoming wedding was the best kind of consolation.
February: No racing this month as part of my fiscal responsibility program, but I suffered through the second annual Super Century, where I watched Ride the Divide and fell in love with the idea of doing the Tour Divide
. 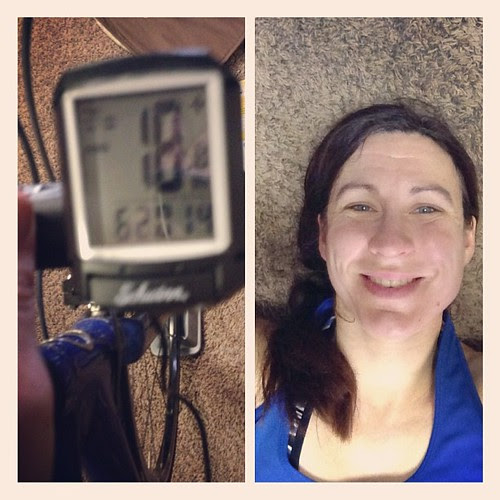 The month wrapped up with a trip to Missouri for Bob and Cara's wedding and a very fun day with my teammates.
March: No racing this month either, but I finally got my long-awaited cross bike (thanks, Airborne Bicycles!).  Its maiden voyage was on the Graveyard Gravel Grinder with Chuck, Lori, Robin, Russ, and Patrick.  I love the way my friends can turn a run or bike ride into an adventure, and with this group the steady rain just made it more fun.

Another highlight of March was a trip to Mt. Carroll, IL, to volunteer at High Profile Adventure Camp; I had a blast hanging out with old AR friends, making new ones, talking adventure racing with people who were there for the camp, and even getting a little more ropes and navigation experience.

April: I turned 40 at the beginning of the month and celebrated by attending the CAC2 non-race, getting to follow Alpine Shop's Jeff Sona through the course and play Luke (or some less capable but very excited equivalent) to his AR Yoda.
The next weekend I didn't come close to meeting my goal but still placed 1st in my age group in the Ava Brown Memorial 5K.  Though I'd been logging quite a few (never enough) miles, my Dirty Kanza training kicked into high gear this month with several long gravel rides.

My very favorite of these was the Massas Creek ride Chuck put together, and then we all had a great time when some of the Virtus guys hit St. Louis for a night ride.
May: The month started off with a bang as 113 miles of gravel at Cedar Cross kicked my butt.

The rest of my weekends were almost as bike-heavy: the River Road and Busch Wildlife one weekend, the Broemmelsiek Challenge mountain bike race followed by Katy Trail gravel another.  And then, with DK200 looming, Nathan developed appendicitis and had surgery.  Even when your kid is almost 19, leaving him behind a few days post-surgery is a lousy feeling...especially when tornadoes hit your hometown while you're away for a race.  On the plus side, all that "Mother of the Year" pressure pretty much dissipated.


June: What do you say about a second straight DNF at Dirty Kanza?

Not just a DNF, but about 50 miles fewer than I rode during my first attempt...on just a month of training.  DK2013 still stings, and don't imagine I don't think about it every time I get on my cross bike.  2014 will be different.  More training, and hopefully more mental toughness so I'm not slipping into big baby mode if the weather isn't favorable...because chances are it won't be.  All that aside, I love Dirty Kanza.  There's something special about riding somewhere so remote and so beautiful.

July:  I surprised myself by setting a new 10K PR (56:19) in the Firecracker 10K and came in second in my AG (and 9th woman overall) in the Tour de Donut bike race.  That AG place is the race finish I'm proudest of for 2013, because it's the only time it wasn't a result of small numbers of competition.

August: I did some running in preparation for October's half marathon and rode bikes with my kids, but the big story of August was the Thunder Rolls 24 hour.

Last year's race was an awesome experience but marred for me by feeling seriously out of shape.  This year I came back in pretty close to the best shape I've been in for the past few years and felt fantastic all through the race.  Team Virtus fielded two teams.  We stuck together for much of the day, and racing with so many of my teammates was a blast.  Luke and I missed the cut-off by 9 minutes and were unranked finishers, but it was still one of the best races of my life.

Those placements had nothing to do with my ability and everything to do with there being very few women racing that day, but the money I won still spent all the same.  In other news, I did a lot of trail running, including a long run at Lost Valley that gave me hope that October's half wouldn't be an unqualified disaster.

October: Jacob had a great time at Take a Kid Mountain Biking Day at the beginning of the month, and then I raced the next day.

Though I'd registered for the MO' Cowbell half marathon with plans to train faithfully and see what kind of finish I was capable of, my intentions were better than my follow-through.  Even so, I eked out a sub-2 finish (1:59:41) and was absolutely thrilled.  Later in the month, I teamed up with Luke against Bob and Casey at the Perfect 10 orienteering race.  We beat them, of course.

November: I had a six minute PR at the Skippo 30k and, even better, did not finish third last like the previous two years.

I got in lots of saddle time on my cross bike with a 50 miler on a gorgeous fall day and 111 mile round trip for lunch on an unseasonably warm -- and very windy -- day.

I got a long-awaited (and somewhat surprising) 5K PR at the Neighbors in Need Turkey Trot -- at 25:00.44, very close to my sub-25 goal.  Then, despite my good intentions to go it alone at the Hawn Turkey-O, I ended up sticking with Bob and Mickey and enjoying a fun day in the woods with friends. December: Can you say coolest month yet? It certainly was as far as temperature is concerned, but the last month of the year was pretty fantastic.  The Castlewood 8-Hour with Team Virtus (starting temp: 10*)...

A 5-minute PR at Pere Marquette in 8 inches of snow...

Three trips to the permanent orienteering course at Rockwoods Range, the second with a starting temp of 6*....