This was my fifth time at the Skippo and the fourth time running the 30k. My first year there was only a 20K option...those were the days!

The course is a 10k loop that you repeat until your distance is up. Miles 1-2: fairly flat and fast. Miles 2-4: a trip up 200 stairs (this section gets progressively more "fun" with each loop). A short run at the top of the bluffs takes you to a shorter climb followed by a fun downhill section, a creek crossing, and then Cardiac Hill. Miles 4-6.2: one runnable climb (though, spoiler alert, not so runnable for me today) before two miles of flat and downhill running.  And repeat.

The temperature at race start was supposed to be in the low 40's, and I went back and forth about what to wear. Shorts or capris? Long sleeves or short? In the end, I wore capris, a thin long-sleeved tech shirt, and my 100+ Project hat.  I brought other options but stuck with that.  My general rule of thumb is that if I'm comfortable before the race I'll be too hot during, and while I wasn't comfortable this morning I was close enough that I should have switched shirts.  The sun was out, and it got warm pretty quickly.

I got to see lots of friends pre-race, which is always awesome, and I lined up at the start with Chuck, because apparently we haven't seen enough of each other lately. Actually, we've run enough together that we know our current paces are similar, though he's a stronger runner especially on hills.  Because I was busy talking, I didn't really notice how far we were back, and we ended up starting with the very last wave.  Oops.

Oh well, that just gave us plenty of people to pass, and pass we did.  I felt really good starting off and tried to stay focused on running comfortably hard.  One of the things I recently re-read from last year's Skippo report was ending the race strong enough that I thought I should have pushed harder during the race, so that was my plan for today.  We hit the mile 2 marker in around 17 minutes, which is fast for me on a trail.  Or anywhere lately. 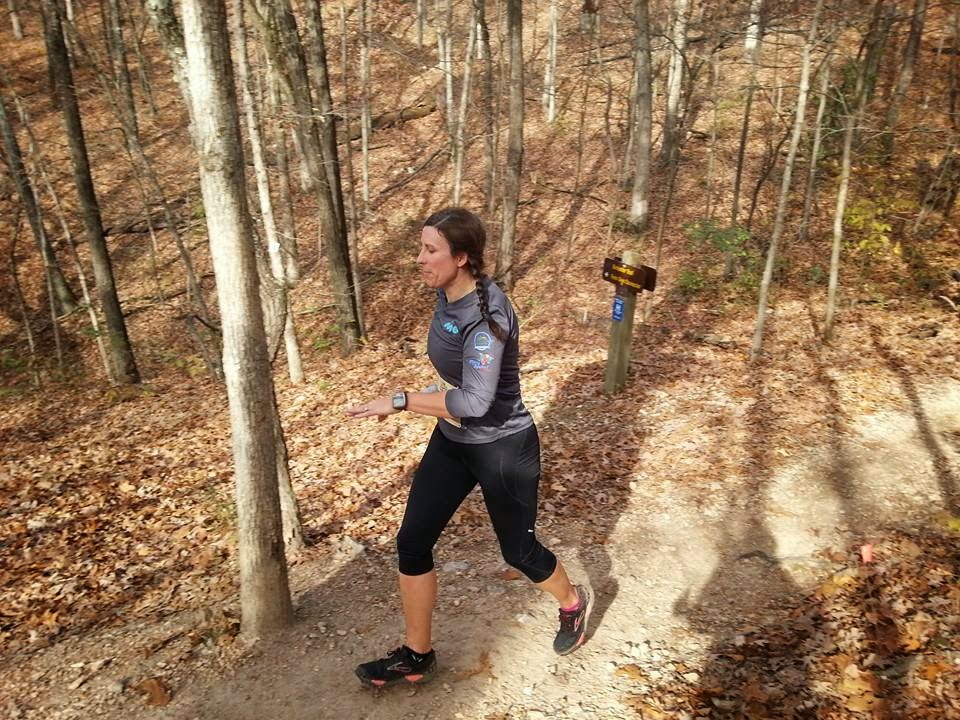 The stairs brought our pace back to reality, but overall the first lap went well.  I had good company, I felt strong, and we were passing lots of people.  As we neared the timing mat marking the end of the lap, Chuck said, "Wanna do something stupid? Let's sprint for the end of this lap!"

Because I'm called to do stupid things (like register for 30k races), of course I was up for it.  I thought I had him for a minute, but he edged me and then I pretty much gave up, laughing as I jogged up to the water table.  My friend Michelle, having seen Chuck kind of elbow me out of the way, offered to trip him for me, but I was merciful and let him run on unscathed.  We finished lap one is 1:04, which is a new fastest time for me on a Skippo loop.


We ran the first two miles together, and then Chuck pulled ahead when I stopped at the top of the stairs to fix my shoelaces.  I kept him in sight ahead of me through the next two miles, but I lost him for good at the top of Cardiac Hill when I stopped again to adjust my socks and to retie my shoes.  I was definitely running a much easier pace than the first lap; my legs felt OK, but the bottoms of my feet were killing me, especially the ball of my left foot. I was hoping maybe my sock was just bunched up, but stopping and fixing my it didn't help.  I've got nearly 300 miles on my Cascadias, so maybe I just need to suck it up and replace them.


I spent most of lap 2 in a no man's land with no one around me and made it to 20k in 2:18 (which I think is also a PR for me at Skippo).  The day was beautiful and the trails were in amazing shape.  It was fall all over except for on the trails, which had been so thoroughly leaf blown that they were almost completely clear.  Neither these facts nor the two mile downhill back to the start/finish kept my mood from going dark.  I wondered if I'd still get my mug (my main reason for doing the race) if I dropped at 20K,  and by the time I hit the timing mat I was a very grouchy runner.  "I hate everyone doing the 20K," I told Michelle, "because they don't have to run any more."

The volunteers at the water table filled up my water bottle for me and then I walked for a little bit, beginning a loop marked by lots of walking of very runnable sections and lots of internal grumbling.  The 20K people were in good company, because I was also angry with the people riding on the closed trails and the fact that every dog owner in the St. Louis area appeared to be walking their dogs up or down the stairs while I trudged up them. This is so not me.  Even when I'm not having a good race, I'm typically pretty cheerful and really enjoy talking to other people in passing. Today I could barely muster a mumbled "nice job" on the rare occasions I passed someone.

I made a deal with myself that I would run all of the flats and then I could walk hills as slowly as I wanted to...a deal that I promptly and regularly broke.  My feet hurt, I was tired of running, and people started passing me.  I walked anything approaching a hill and became much more tentative on the rocky downhills following the stairs.  Even so, I hit the 15.8 mile mark in 3:05:25, leaving me 32 minutes to run 2.8 miles and equal my PR...and 2 of those miles were downhill.  Totally doable.

Unless, of course, you self-destruct.  I walked a big chunk of the flat section following the creek crossing.  At the top of Cardiac Hill, I ate my final GU and all of the sudden had a very unhappy stomach.  My feet hurt, and the icing on the cake was the fact that the muscles in both legs started to spasm.  It didn't hurt, but it felt weird.  I'd run what I could and then walk.  Run, and then walk.  And curse. I did a lot of cursing.

Running down the final downhill, I heard a bike come up behind me and moved over so he could get past.  "You've got a couple runners hot on your tail," he told me.  In retrospect, I think he was warning me so I could hold them off, but what I interpreted him to mean was You're going to be in the way of two more runners, and so I grumbled, "Then they can pass me, too."

But I also sped up, because I didn't want anyone else passing me.  And they didn't.  I ran out of the woods and along the road back to (finally!) the finish line, with JB driving alongside me cheering me on and encouraging me.  I was hurting and really unhappy with my performance and my time, but the escort made me smile.  I crossed the finish line in 3:47:35, ten minutes slower than last year, and 4 minutes slower than my second best time.


I was near tears at the finish, but I have awesome friends who brought me a drink and crackers and my boots and food, which makes everything better. And the upshot is that if I'm going to get upset about my results, I need to put a little bit more into getting the kind of results I want.  Yes, I did a much better job building mileage gradually, and that paid off by NO hip pain this year. But most weeks I only ran once a week on my long runs; I needed more miles on my legs.  And more mental toughness: the bottom of my foot is still a little sore, but there was no actual injury. I need to get better at dealing with discomfort that's a natural part of running longer distance, especially without optimal training.


I'd like to blame last weekend's race for my lousy performance, but I really don't think it was an issue in my performance (I do think it's possible that overtraining/overracing factored into my negative mental game). I think bigger contributors might be lack of sleep, sub-optimal nutrition (yesterday and today during the race), possibly going out to hard, and hey...maybe it just wasn't my day.  As I mentioned on Facebook, if one of my November races is going to suck, Skippo is the one I'd choose.

For all that the results weren't what I was looking for, there were a lot of great things about today.  The weather was perfect for running, I got to spend my morning in a beautiful setting, the trails were fantastic, and my body will run(ish) for 18.6 miles. Those are all things to appreciate, and they were topped off by the fact that I had friends all over the course today: racing, volunteering, cheering, and taking pictures.  Anybody who would complain about a day like that is plan ungrateful (or just needs a little more distance from her shitty race to realize how lucky she is).

Big thanks to Big River Running for a fantastic event and to all of today's volunteers!