We all know that I'm a less than skilled mountain biker, so when a casual friend sent me an event invite for the Broemmelsiek Challenge on facebook, the smart thing for me to do would have been to ignore it.  Instead, I wrote it on the calendar.  Originally scheduled in June, the race was rained off during our monsoon period (as opposed to the insane heat/drought period we're currently "enjoying").  The postponement gave me a chance to get out and pre-ride the course with good (I had fun and learned the course) and bad (crash) results, so I was more excited than terrified on Sunday when Robin and Patrick picked  me up.

After our mandatory stop at Quik Trip, we met Chuck and Lori at the park, where they had already set up a tent.  Chuck, Robin, and Patrick were all racing, and Lori took all kinds of awesome pictures (and kept me company).  I was very glad for this tent later in the day.  Everybody else looks a lot tougher in this picture than me, and that's because they are.

I had been trying to decide between the beginner race (2 laps) or the marathon race (ride for 3 hours, most laps wins).  I had no illusions of placing in either, but my thinking was that I'm stronger than I am fast (mostly because I'm so timid, not because I'm so strong).  The fact that all of my friends were riding in the marathon and I was going to be at the park that whole time no matter what now swayed me a little, but in the end I decided on the beginner race.  My thinking was that, in my first race, I'd prefer to quit wanting more than to be stuck out there hating my decision.  My "SuperKate" nickname was modified to "Beginner Kate", but I was pretty comfortable with my decision. 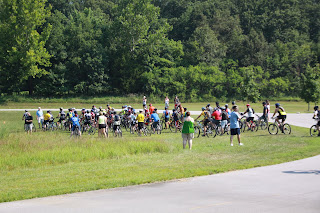 The beginner and marathon races started at about the same time with marathoners given about a 2-minute lead.  Here you can see most of us gathering before the start.  That's me in the yellow at the back.  The race started across a field and around a pavilion before turning down a rocky path into the woods and across a little creek.  The field start helped to ease the inevitable bottleneck at the creek.

Well, sort of.  I didn't start off too aggressively because I didn't want to get caught up in a big pack of bikes (you know, in a bike race. Sigh.) as we came down the hill to the creek, but that didn't work out so well for me.  A guy in front of me came to a sudden stop as he hit the water, forcing me to stop, too.

All the people behind me (that's right, there were, at one point, people behind me) were calling that they were coming through, so I ended up stuck waiting for the guy plus all of them before I could get going.  Bad start.

Finally, after basically everyone else got by, I got to get across and head up a hill from a dead stop.  Big loss of mental and physical momentum. 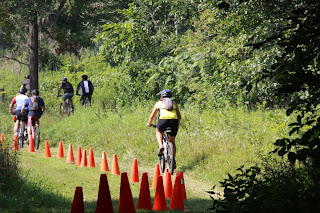 Once we got up the hill, we rode through a field for a little before heading into the woods.  The course had two large wooded sections that were connected by trails through the field.

You can see that a pretty wide swath is mowed for the trail and then there's a dirt rut where bikes have worn away the grass.  The rut is a lot smoother and faster, but there are also parts where it's cut down a bit, almost like sliding down off a curb but not so steep.  In the deeper parts, I stuck more to the grass because I was worried about catching a pedal on the edge of the rut or having my back tire slide on it.  The nice thing about the trails through the field was that it was easy to pass there.  The bad thing was that it was in the 90's on race day and riding through the field in the direct sun it felt like it was about 120 degrees.

The singletrack was fun.  While I'd been worried about the whole passing issue, the one "perk" of being darn close to last and slow as dirt was that it was almost like having the trails to myself.  I passed one girl (who was competing in the junior's division) fairly early on, and then I passed another girl towards the end of my first lap.  Otherwise, I had one more girl in my sights, but since I tend to slow down going down hills, I lose time in the very places where other people are gaining it.

I did ride more aggressively than I typically do, and there were definitely some turns that I took wider than usual, leading me to hold my breath a little as I skirted a tree or the edge of the trail.  I was nervous coming through the creek crossing where I'd crashed the previous Thursday, but I made it through with no problems.

Midway through the second lap I was pretty grateful that I only "had" to do two.  It was so hot, and those stretches through the field were miserable.  Every time I rode back into the shade of the woods I was relieved.  It wasn't until the last half of my second lap that a few of the fast marathon guys lapped me, and everyone who passed was unfailingly nice and encouraging.  I had a great time, but I was still pretty happy to come to the end of my second lap.  I ended up missing third place by about a minute and a half...a fourth-place finish that sounds pretty great for my first mountain bike race until you realize that there were only 5 girls in my division...and one DNF'd.  Oh, well, I finished and didn't need medical attention, which were my two main goals for the day.

I went and sat in the shade under Chuck and Lori's tent until Chuck came through to switch out his water bottle.  I asked if he needed his bottle refilled or anything and he said yes and told me to tell the others to stuff ice in their jersey pockets. 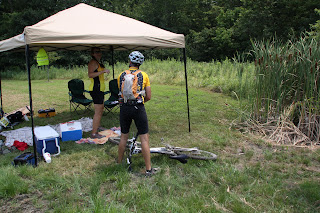 So then I kind of transitioned into pit crew for Chuck and Robin (Patrick declined assistance and zipped on through) with Lori joining me when she came back from taking race pictures in the woods.  Well, we did some helping and a lot of talking (sorry Patrick!).  It was fun getting a chance to hang out and talk and give a little help to people who've been including me in their training all year long.  A little part of me wished I was still out there riding, but once the Cat 1 riders started flying past (they started at noon, 2 hours into the marathon) I was newly glad to be on the sidelines.  There was a lot of passing going on at that point, and I think I'd have spent more time on the side of the trail than riding.  I definitely made the right choice, and watching my friends push on in the heat made me see how far I have to go. 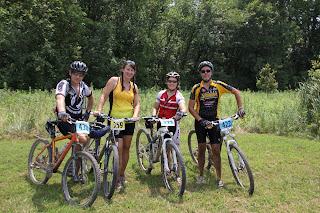 In the end, none of us placed, but all of us had a great time.  Because it's been so hot and dry, we were all a filthy mess.  If you look at Chuck's legs (far right), you can see how dirt-covered we were. 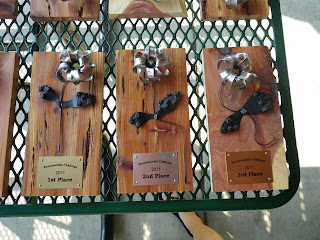 The awards were awesome.  The flowers are made from CO2 cartridges, the stems are spokes, and the leaves are tires.  How cool is that?  And even though I didn't place, I was able to make someone's day.  The girl who came in ahead of me was at the tent next to us, and I'd overheard her telling someone how disappointed she was that she hadn't placed but had come in fourth.  I was a little confused, because I had come in fourth, and I knew she hadn't DNF'd, so I went and re-checked the board to be sure and then came back and told her.  She was all happy and gave me a big hug, so even if I didn't win it felt a little like being part of someone else's victory.

They had a ton of schwag to give away, so we hung around for the awards and the raffle.  Chuck and Patrick's numbers were called really early, while Robin and I just sat there as number after number was called.  I never win anything, so I didn't have a lot of hope.  It got to where it was almost funny.  It was so hot that a lot of people had already left, and the table was piled high with stuff, so you'd think there was no way anyone could go home empty handed....the organizers called number after number, and none of them were ours.  I wasn't too worried about it until I noticed a helmet on the table.  One of my helmets is a cheap one from Target, and the other one is a helmet my son's stepmom picked up for him at a thrift store.  I could really use a nice helmet.  Finally, they called my number and I got it. Yea!

Poor Robin's number was never called, but the guys got so tired of calling out numbers that they just started tossing stuff into the crowd.  I snagged a t-shirt for her...it's the most hideous clown with blood coming out of its mouth.  Ummm...sorry!  A water bottle fell right into my lap, too, so I went home with two new things.  I figure that getting a new helmet offset the cost of my race entry, so it was like having all that fun for free.

All in all, it was a great experience.  Can't wait to do it again. :)
Labels: Broemmelsiek Challenge mountain biking racing united federation of dirt