The rest of my trip

I already told you about my cool mountain bike adventure in Wisconsin, but the Tour de Donut distracted me from finishing up my vacation recap.  Now that I've recovered from my sugar coma, I'll fill you in on the rest of the trip.

Hannibal's main claim to fame is being the boyhood home of Mark Twain.  There are several places around town that figured into his books (including Injun Joe's cave), as well as a Mark Twain Museum.   Despite the fact that I've been going to Hannibal every year now for about 13 years, I've never actually been in the museum.  The mud volleyball tournament is held every year in conjunction with Tom Sawyer days.  It's a pretty big tourist weekend with other competitions as well: fence painting, frog jumping, a Tom and Becky pageant, and a 5K/10K.

For the past two years, Jeff's boss has sponsored us, but this year he decided things were a little too tight.  Luckily, Jeff's uncle's business stepped in to fill the void and Rondell's Beach Bums was born.  It's a California company in the Orange area that has something to do with insurance and flooring...so, you know, if you live near there and have an insurance/flooring need, check them out.

The tournament has always been a big family weekend for my husband's family, and all of them go up, which gives us a fan base of about 25 people. Our team is a family team consisting of Jeff, D, and I; Jeff's sister Karen and her husband, Jeff's nephew Casey, and Jeff's cousins Tiana and Wailana.  We usually win a few matches of the double elimination tournament before being knocked out either late Saturday or early Sunday.  Not too bad, considering the entire team never gets a chance to play together except for this weekend.

That's pretty much how it went this year, too.  We won our first match easily, and then the second match wasn't until noon on Saturday.  Usually we have to be up super early (you know, like 7 :D) for our Saturday match, so this was a treat.  I had semi-planned to run the Hannibal Cannibal 5K, but I was still running a fever and opted to sleep in instead.  We showed up for our noon match, but our competition didn't.  Turns out they'd misread the bracket and thought they played at 2.  We lost our 4:30 match badly (and looked bad doing it...think Keystone Cops in mud) and then lost a close match at 7:30 or so to end our tournament.

Despite making a couple bad plays, I also made some good diving saves, so overall I was OK with how I did.  Though I'd have liked to play longer, getting knocked out of the tournament early wasn't so bad because it meant I could leave for Wisconsin first thing Sunday.

J ended up staying back with Jeff because he was complaining of not feeling well and I was staying with friends who had three little girls.  Nothing like repaying your hosts' hospitality by getting their kids sick, right?  I was both disappointed to miss out on an adventure with my little boy and excited to get some time to myself.

I had a great drive and got to spend some time with my brother.  I mentioned being disappointed that I was going to get off track on my weight lifting program, so he took me to the gym at Ft. McCoy so we could work out.  I felt a little conspicuous in my normal workout clothes, since pretty much everyone else was in their PT clothes, but oh well.  We had a nice dinner on the way back and then I went to bed early because I had to leave for Minneapolis at 4 a.m. the next day.

N's club volleyball team was playing at Nationals, and the Minneapolis site was perfect because I had a friend there with whom I could stay.  I'm very lucky to have the wonderful friends and family I have.  Sarah is one of my best friends from high school, but you know how it is...life gets busy with kids and jobs, and you talk once every 4 months or so.  Even so, when I emailed and asked if I could stay with her for a few days, she welcomed me with open arms.

I was really excited to get to watch Nationals because 1) I missed it last year, 2) the team was coming off a fantastic tournament in California, and 3) they were seeded 5th.  Unlike my lucky husband, who got to watch them kick butt, my experience was a bit different.  Apparently they played great on day 1, only losing one match, but the next two days were purgatory at best.  They only won one match on each day, and N. (who had an amazing tourament in CA) barely played.  Finally on the last day they picked it up (and he played a lot), but they ended up finishing 22nd.  Not a stellar showing at all, but what's the line? It's an honor just to be nominated?  Yeah, it's a big deal to even be there playing against the best teams in the nation.  It's just disappointing to see them not show up and play the way they can.

The dismal volleyball didn't stop me from enjoying the city, though.  What a cool place! 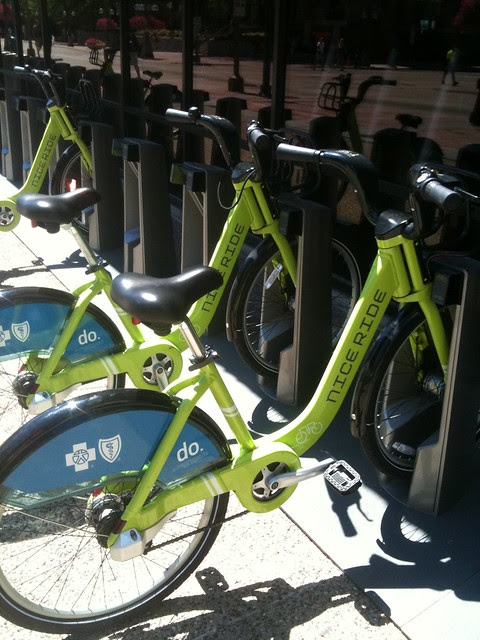 They have a neat bikeshare program downtown.  You use a credit card and pay $5 for access to a bike for 24 hours.  You can use the bike for as many trips less than 30 minutes for no additional charge.  Trips over 30 minutes incur an additional charge depending on how much extra time you use.  This keeps the bikes in circulation.

I saw these bikes in use a lot downtown, and even more of other bikes.  People were riding and walking everywhere!  It was very cool.  It seems like Minneapolis has a great bike culture.  If you look at the picture below, just look at all the bikes lined up in that picture.  And that was just on one random corner.  It really inspired me to use my bike more for getting around.  (That said, I haven't actually done so yet.) 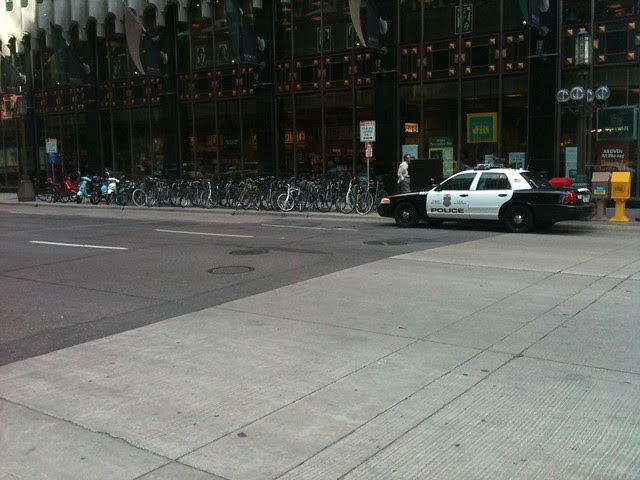 Another things some friends and I noticed while walking around downtown was the dearth of fast food.  I don't remember seeing a single McDonald's, Burger King, Taco Bell, etc.  That was nice for me, but it would've been a real pain with J along.  I ate once at a BBQ place that reminded me a little of Memphis
and once at Chipotle.
The weather was in the mid-high 80's, which felt plenty warm but was a nice respite from the insane heat we've had here since I got back (117 heat index?? WTF).  After volleyball and lunch on Wednesday, I came back to this bench near the convention center and just relaxed and read for about an hour (German Boy

: about a German family at the end of Germany's part in WWII and during the period afterwards.  His experience with American soldiers was pretty heartwarming and with Russian soldiers was absolutely appalling.  It was an interesting book because it's about a part of the war I have never really thought much about.  I've read a lot about the Holocaust but very little about the experiences of ordinary people during the war.)
I also got a little running in.  My friend lives about 2 blocks from the Minnehaha Trail .

Much of the trail is divided into two parts: one for bikes and one for runners.  It's a beautiful trail that runs right along Minnehaha Creek.  It leads right to Lake Harriet and another path that loops the lake.  Apparently, you can take the trail around all three lakes in the area for about a 12 mile round trip.  That would sure make those longer training runs nicer than my out and back runs along the cornfields!

Despite weather that wasn't bad at all and a fairly flat trail, I definitely struggled on my run.  I was very glad to take lots of photo breaks.

Once the boys were out, I picked up some souveniers and headed back to my brother's house.  We had a great dinner at a local Italian restaurant (deep dish pizza...mmm), the next day I spent several hours mountain biking, and then I headed home.
Labels: bikeshare club volleyball mini book review Minneapolis Minnehaha Trail running Wisconsin