Orienteering.  What did you think I was talking about? On second thought, don't answer that.  I'll just assume you knew what I meant.

Today was one of those days where the possibilities were endless.  I had friends doing a trail run in preparation for this year's Pere Marquette Endurance Trail Run (much needed preparation, if you remember last year's debacle), friends doing a 45-mile road ride, friends doing this month's Dirty Girls mountain bike ride, and an orienteering meet.  Plus, I'm scheduled to run 9 miles for half marathon training.  My bike time has suffered (read: disappeared) since school started, but orienteering is definitely my weakest area at this point, and with just a month to go until the Berryman 12-hour, that's the event that won out.

You might remember that the last time I went orienteering I brainwashed convinced my husband that it would make for a great date night (and it actually did).  This time, lacking a babysitter, I had to talk my 7 year old into participating as well*.  C'mon, it'll be awesome! It's like a treasure hunt...only you don't get anything.  While I may have an inauspicious future in public relations, it was enough to get him on board.  His 17 year old brother, on the other hand, opted out.**

So off we went at 8:00 on a very gray Saturday morning to go play in woods.  As we headed west towards St. Louis, the sky grew progressively darker and lightning streaked the sky.  Things weren't looking too good.  Not wanting to drive an hour for nothing, I looked up the contact numbers for the organizers and checked to make sure the meet was still on.  I think Jeff was half hoping to turn the car around, but with the lightning forecast to move out of the area by start time, he was out of luck.

Now, our last orienteering meet was a Score-O.  Basically, everybody gets the same map and you decide which checkpoints (or controls) to get, in which order, and get back in a certain amount of time.  At this meet, you had to get your checkpoints in a certain order.  Teams got different maps.  All of the checkpoints were the same, but the order in which you had to get them depended on which map you got.

Much like the last meet, we did most of our navigating using the map, though we did have to bust out the compass at one point (and prove that I have a long way to go before achieving any kind of navigational competence).  Most of the checkpoints were found near to roads or trails, though taking the roads or trails may or may not have been the most direct route between points.
﻿
﻿

Because people were searching for checkpoints in different order depending on which map (well, depending which course the map showed), the clue sheet was particularly important.  The checkpoints each have a unique punch and a number inside of them.  So if you look at our clue sheet, CP 150 was the first one we needed.  For another team, it might have been their tenth.

You can also see little symbols near the CP number.  Those are clues to where the CP will be found.  Since we don't know what many of the symbols mean (yet), we'd have to flip over to the map to check.  We really didn't need to use the clues much, though, because the majority of the CPs were pretty easy to find once you were in the right area.

Our group started around 9:20, and off we ran into the rain.  J. had been pretty funny earlier, talking about how he and I could run "our pace" and maybe we'd go in two groups so Jeff could run "his pace", but my non-running husband kicked butt.  He right away figured out where we needed to go, and he outjogged J. before too long.
﻿
﻿ In the picture above, the orange and white flag-looking thing marks the CP.  Jeff is holding the map and passport, and J is using the punch to mark the passport and thus prove we'd been there.

Despite there being a couple different courses, we ended up right after a group with the same map that we had.  That kind of stunk because, even though we weren't following them, it felt like we were.  Plus, if you see the people ahead of you running out from a trail, you pretty much know the way you should go, and I really wanted to be figuring it out on my own.  We ended up separating from them in the search for CP 10.  That one was tricky.  It looked like you could just follow a trail around to get to it, but somehow the terrain wasn't showing what the map said it should.  They were old maps, so that's not necessarily our error (though it very possibly was).  We backtracked to CP 9, looked at the map again, and decided to bushwhack along a creekline towards the CP.  After the creek ended, then Jeff used the compass to keep us on track, and we found #10 with no (further) problem.


This was a 5K course, but that's as the crow flies, so we did quite a bit more than that.  I'm guessing around 4 miles, total, and just as I was starting to feel really good running and navigating, J started to drag.  It was a little frustrating to want to run and be stuck walking, especially when he was really poking along, but I kept reminding myself that we were there to practice navigating and his slow pace wasn't interfering with that.  Plus, I wanted him to enjoy himself.  We also kept him distracted with English walnut soccer and motivated with things like, "Oh, you never want to walk on the downhill! That's when running is easiest!"

One unwelcome feature of the course was the fact that CPs 3, 14, and 26 were all at the same spot on the playground, which gave my child three separate reminders that it was there and prompted multiple pleas to stop and play.  Thanks, organizers. :)  As we got into the back half of the course, I started to feel sad that it was going to be over.  "Thankfully" J's increasingly slow progress made me look forward to the end. 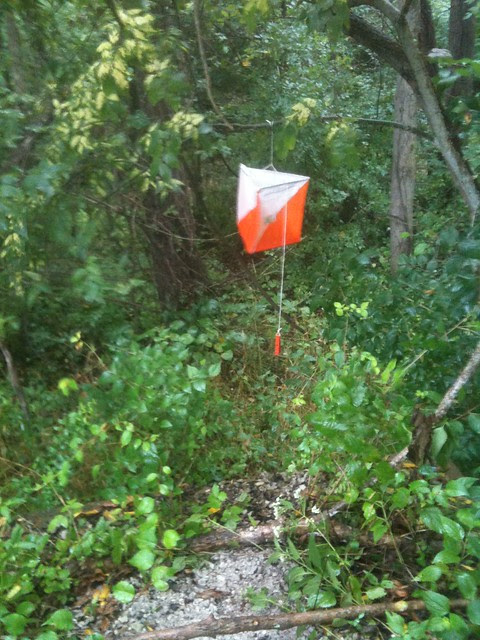 CP 19 (another off-road one) was our only other real navigational challenge.  Jeff had handed the map over to me (despite my apparently frustrating habit of always turning the map around so that it wasn't facing the wrong way), and I had managed to get us to several CPs in a row.  Drunk with my success, I charged off in pursuit of the next one only to round a corner and have no idea how what I was looking at corresponded to the map.  Following some discussion (basically, "I don't know where the heck you have us"), we did a little more bushwhacking uphill, and then Jeff figured out where we were and we found #19.

After that, it was basically a matter of following the roads and trails to CPs 20-28.  I think we were pretty much the last ones in (even including the people who started after us), but we all had a good time and I got more orienteering practice (and it is, of course, all about me). And as much fun as I had during the orienteering meet, my very favorite part of it came afterwards.

We stopped in the parking lot to say hi to my friends Scott and Melissa, who are both kickass navigators and pretty speedy, to boot.  I mentioned that J had done pretty good in his first meet.  He told them, "My friend at school told me he was going to do the coolest thing EVER this weekend.  I asked him what it was, and he said he was going to the drive-in.  I said, 'Well, I'm going to an ori--...orien-- ...orienteering meet.'"

"Not as cool as THIS!" Jacob replied.

Running around outside trumps watching movies? Oh, yes...today was 100% successful.

*Yes, I realize I'm the parent and can make him, but anyone with kids knows that their willing participation makes for a much more pleasant experience.

**As a result, I forced him to go to a swimming party with me with my high school friends and their (much younger than him) children.  Nothing like partying with a bunch of "old people" and little kids to make you regret sleeping in.
Labels: orienteering St. Louis Orienteering club