About a year ago, this guy I barely knew from the internet posted a note on Daily Mile saying that his team would be competing in the Berryman Adventure 36-hour race and that we could follow their progress online and send them encouragement during the race.  I didn't even know what adventure racing was, but I logged on during race day to check out how his team was doing.  In addition to a leaderboard, the website also had this awesome board where you could post comments, shout-outs, encouragement, or taunting to team members.  People also posted some questions about where "their" team was in the course.  Occasionally, pictures from the day were added to the board.

I. Was. Hooked.  I spent the day with the website up on the computer, checking back every time I heard the little clicking noise that signalled a new message.  We left the house, and I wondered how Patrick's team was doing.  The weather was beautiful, and I thought how nice it was that they had such great weather.  As dusk fell, it started to rain and get cold, and I thought about them out there in the rain.  I went to bed, woke up, and they were still racing.  My husband totally didn't get it.  Why did I keep looking at the computer to check on this person I'd met once? 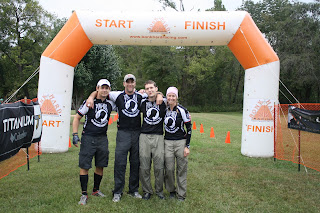 And, yeah, I wanted Patrick to do well, but it wasn't even about his team...it was about the race.  It just grabbed me.  It was pretty much the coolest thing I'd ever seen.  Within days, I had emailed my brother: we have to do this.  And, because he rocks, he agreed.

"What is adventure racing? ...adventure racing is a team-based multisport event where teams travel through unknown terrain collecting a series of checkpoints (CPs) along the way. Teams use only a map and compass to guide them through the course, and must remain together for the duration of the race. Core disciplines include cross-county running, mountain biking and paddling. Adventure races can also include rope work, caving, white water rafting, scootering, swimming, rock climbing and a variety of mystery events." (from bonkhardracing.com)

While I had done some trail running, I could barely use a compass or topographical map, and my one mountain biking experience had led directly to surgery.  I had my work cut out for me before the race.

I had been saving up for a road bike, but once the adventure racing bug bit me, I put aside the road bike plans and started working towards a mountain bike.  It took me until Christmas to get it. And then I had to actually learn how to ride it.  I mean, I know how to ride a bike, but riding trails is a whole different thing.  Especially if you're somebody like me who's timid and scared of everything.  It's been a steep learning curve, but I've definitely improved.
One of my Christmas presents was a book on orienteering.  I read it cover to cover.  Twice.  I took a class on basic orienteering (where I felt more lost after than before).  I non-raced with a map tutor.  My husband and I have done two orienteering meets.  A friend went over plotting UTM points with me.  I will still be leaning on my brother's (hopefully considerably greater) map and compass skills.


I've read countless adventure race reports, most of them more than once, and been lucky to find people with adventure racing experience who are willing to share.  I got to spend a day at an adventure non-race and find out first-hand how demanding and exhausting it can be (though at least this time my race won't follow a 21-mile run!).  And I've gotten progressively more excited as the months have passed and the race has gotten closer.  And now it's in 4 days.

So what's this Berryman race you've been talking about?

My brother and I are competing on the 12-Hour Course:


"12-Hour racers will have a challenging course as well and should take this race very seriously! You will need to come well-trained and well-prepared if you want to complete this race. Racers will enjoy racing in deep backwoods forests and will be on miles of fantastic singletrack! You can expect to paddle some of the clearest streams in the country. Racers should come prepared to complete 20 - 35 miles of mountain biking (on gravel roads, jeep roads and single track), 7 - 15 miles of running, trekking and bushwhacking and 5 - 15 miles of paddling. Only about 1% of this race will take place on pavement. The entire course will be navigation based, and teams should be very proficient with using a map and compass in order to find their way through the course. Expected winning time will be around 7 hours."

Expected time for us will be significantly more.  We won't be doing much if any running due to the fact that Jim is dealing with two ruptured discs.  Chances are, though, that if we were running, it would be in the wrong direction.  This race is a Learning Experience.  And once I get finished with my normal pre-race freak out (What the HELL am I getting myself into??), I know it'll also be a blast.  Between nerves and sheer excitement, if I make it to the start line without peeing my pants, it'll be a miracle.

I was hoping to share a link with you so that you could log on during my race, cheer me on virtually, and possibly drink some of the adventure racing kool-aid yourselves, but the interactive site will apparently only be tracking the 36-hour racers.  I'd still encourage you to check it out, and if you feel like cheering for a team, my friend Luke and his brother Casey are competing as Team Virtus, my friend Chuck and his friend Megan are competing as ROCK Racing, and my friend Patrick (who gave me the ticket for this crazy train) will be competing with Team POW/MIA.  And who knows, maybe I'll be in their ranks next year.