A tale of three rides

We've had some fantastic weather over the past week, culminating in 67 degrees on Friday.  Most of that was spent looking out the window while hanging out with my recuperating child, but when Jeff got home around 3:30 on Friday I busted out of the house to hit the trails on my mountain bike.  The following day was the first Team Revolution Frostbike, a series designed to get women out on their mountain bikes during the winter, and it was being held on our local trails.  Our trails aren't super technical, but they are very twisty and rooty, with several logs to ride over.  One of these logs threw me the day after Christmas when I approached it too slowly (imagine that), and I was determined to be able to ride it before Saturday.

Even though these are my home trails, I usually feel pretty nervous on them, especially when I'm out there alone.  This time, not so much.  I attributed it to the fact that I've been doing a lot of running on them and so know my way around better.  I had taken my new camera, so I even tried to get some video of the trails while I rode.  Since I definitely need both hands to ride and don't have any kind of system set up to hold my camera, which is about the size of a thick cell phone, I got the brilliant idea of unzipping my jersey partway, putting the camera in my sports bra, and letting it run as I rode.  Unfortunately, the cleavage cam was better in theory than practice.

Yeah, super exciting footage of my legs, the ground, and heavy breathing, huh?  Time for a new plan.  My log attack, on the other hand, was a resounding success.  I cleared it on my first try, though it wasn't super smooth.  I probably should have gone back over it a few more times, but I decided to ride more of the trails instead.  I had to put a foot down on a rooty uphill turn and an uphill switchback on a new trail, but otherwise it was a problem-free ride, though I did get spooked when buck crossed the trail right in front of me. leaving a couple lady friends on the other side.  Every since seeing this video I get nervous seeing deer on a bike ride.

Most of the great mountain bike trails are about an hour away from me, so I enjoyed getting to sleep in a little on Saturday morning, not having to be at the trailhead until 7:30.  Ostensibly, I was co-leader for the ride, but Judy had everything planned out and Vanessa was riding sweep, so that left me in the middle and making sure the back group knew where we were turning.  The back of any ride is my natural habitat, so this was a good place for me. 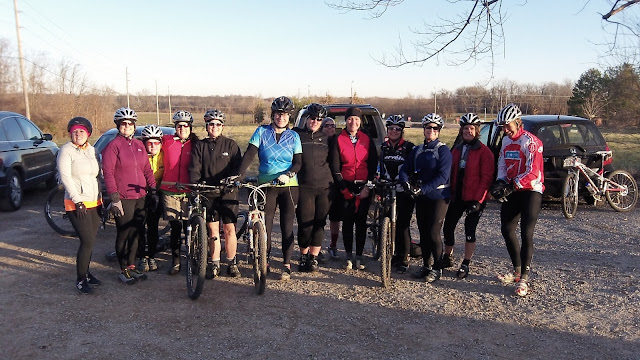 We had an awesome group.  Fifteen ladies, including my friend Amy who was doing her very first mountain bike ride on a borrowed bik.  She was a little nervous.  "I just hope I don't fall," she told me.  Having had a rather inauspicious maiden voyage myself, I tried to temper her hopes with a little realism: "I hope you don't need outside medical help, how about that?" I suggested.  But no, she flat out rocked the ride.  I only saw her hesitate once, and when I told her she could ride it, she did.  I'm seriously jealous.  I only wish I'd been as fraction as good as she looked on her first ride.  She swears that it was because she was so scared, but then fear works better for her than for me.

Usually my mountain bike rides are a combination of fun and dread.  I like being out there, I love succeeding at something that's hard for me, but I'm constantly worried about falling.  I never had that feeling on this ride, and when we returned to the parking area after an hour or so to drop off the people who'd had enough, I opted to ride a little more...and didn't regret it. :)  This was the first ride where I've been able to clear all the switchbacks without putting a foot down; well, I missed one, but I went back and rerode it without messing up.  Awesome, awesome ride.

I hadn't planned on doing the Sunday Frostbike ride at Castlewood Park, but Amy asked me about going and I ended up being able to go.  While Castlewood is very popular with mountain bikers, I've done very little riding there.  It's more technical than our SIUE trails, so I was a little nervous about it....not too bad, though...I think because I was worried for Amy.  I shouldn't have been though, because once again she looked like a natural.  And me?  I felt great! We didn't do anything super hard, but I was really comfortable on the trails.  It's a whole new experience when you aren't stressed out the whole time.

After around an hour or so, we split into two groups: one to ride the flats and the other to go ride some more technical areas.  I was undecided.  Well, I really wanted to just go ride something easy, but instead I opted to go with the more difficult riding.  After all, that's why I'm going out there, right?  And it. was. awesome.  I had so much fun! My speed still leaves much to be desired, but my comfort level on the trails this weekend was the highest it's ever been.  Hey, it's only taken a year. =)

Oh, and since I'm signed up for a 50K in April, I also ran a whopping 3 miles this weekend.  I know you're impressed.
Labels: Castlewood State Park gorc trails mountain biking team revolution