I'm not a big-time gear junkie, mostly because I can't afford to be, but I have a few things I've used a lot this year, either because I loved them or because I had to.  Now you can have the "benefit" of my experience. :)

Asics trail attack 6 - I bought these shoes last year after Christmas, and between a sale and a $15 credit, I got a pretty good deal on them.  I absolutely love them.  I've worn and used the heck out of them, too.  I did most of my marathon training long runs on trails (up to the 20-miler), have run several long trail races in them, done three adventure races wearing them at least part of the time, used them in the snow, and worn them for all my trail running.

I've used them on surfaces ranging from snow to creeks to mud to dirt to rock, and they've never let me down.  I wore my regular road shoes for my first trail race, a 20K that covered some pretty rocky terrain, and the bottoms of my feet felt really beat up.  Not in these shoes.  This year, I did a 30K over the same surfaces as the 20K, and my feet felt fine.  Though I've struggled with blisters in my road shoes, these shoes have never given me blisters.

Potential cons: They aren't particularly lightweight.  I don't wear gaiters, so I've occasionally had to deal with rocks or dirt in the shoes, but that's par for the course on some of the surfaces.  They're not made with Gore-tex, so your feet may get wet, but the only time mine have gotten really wet is in creek crossings, and with Smartwool socks, that's not a problem.

Nike vomero 5 - Very comfortable, but both these and the Vomero 4's that I had before gave me blisters on long runs.  I tried different socks, Body Glide, and 2Toms BlisterShield powder, but none of them helped on 6+ mile runs. I think the cut of the front of the shoe just wasn't right for my foot.  Why did I buy them twice?  Yeah, I don't know.  I think it was because they felt the best on my feet when I ran on the sidewalk by the store, but that didn't help with the long run issue.  Other than the blister thing, they're great shoes, just clearly not the right fit for me.  I will not be making the same mistake for a third time.


Underarmour tights - got these on sale right before my first half marathon, and I've worn the heck out of them.  The only pair of running tights I have, they've proved their durability.  After over a year of steady use, they only have one small hole (from a fall onto concrete), and it's never gotten any bigger.  I've worn them to run and ride in temperatures down into the single digits, and as long as I keep moving, I'm fine.  Underarmour is pricey, but it's definitely a case of you get what you pay for.

Smartwool socks - my first pair, which weren't running-specific, blew out the first time I wore them, but the next three pairs have held up great.  I love these when I know that I'll be getting my feet wet, because they never feel soggy.

Lady Foot Locker store brand running socks - I picked these up on sale to finish up the Foot Locker gift card I won in XLMIC's "Rewarding the Faithful" contest. They weren't super expensive or anything, even at full price, maybe $10 for 3 pr?, but I love them.  I love the way they fit, I love the way they feel on my feet.  You know the first time you wore a good pair of synthetic socks (probably, if you're like me, after being indoctrinated by Fleet Feet's "Cotton is rotten") after a lifetime of cotton?  That's how these feel.  Love them.

2011 Specialized HardRock Disc - Basically, the most entry-level Specialized mountain bike, plus disc brakes.  It's not fancy, and it's sure as heck not light, but it's ridden everything I've asked it to.  When I upgrade to a new bike (we're talking years in the future), things I'd like to have are maybe 29" wheels, a lighter frame, and the ability to lock out my shocks, preferably from the handlebars.  For now, this is all the bike I need and worlds better than waiting another 5 years until I can afford twice the bike. Now, when I can afford twice the bike, I'll have 10 times the skill I do now. 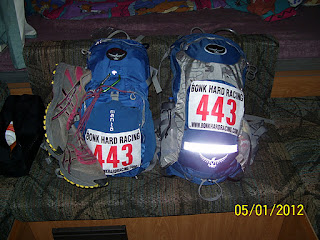 Osprey Manta 25 pack - This is my adventure racing pack. I've used it in three 8+ hour races now, and I love it.  Lots of pockets so you can keep your things arranged and know where they are quickly at a gear check.  It's very adjustable so that you can stay comfortable on the bike or run, and I love the way the back is designed.  A mesh piece keeps the pack from sitting directly against your back, so you have air flow between the pack and you.  Its "Hydra-Lock" system is designed to compress the hydration bladder so that your water isn't sloshing around; because I bought the pack (barely) used, it came without a bladder, and I just bought a Camelback bladder.  It's not easy to get the bladder in place in a full pack; that might be a much easier process if you bought the Osprey bladder instead.  I think they're designed a little differently, but the price is comparable between the two brands.  This is a $135 pack, but I got mine for about half that on GearTrade.com.  Score! 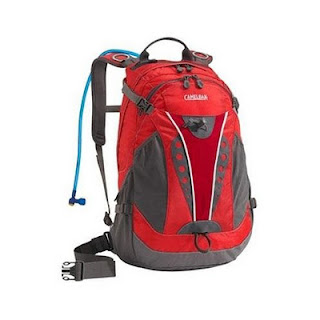 Camelback Trinity hydration pack - Slightly smaller than the Osprey pack, I've used this one for a 3-hour Orienteering meet (iffy weather with my 8 year old, so we had some extra clothes along), and a 3-hour bike ride.  It definitely carries enough to go longer.  In addition to the 100 oz bladder, it also has side pockets where you could put water bottles.  It doesn't have a mesh back like the Osprey pack, but it does have some cut out "air channels" to keep some air circulating around your back.

I like this pack, though I wish it had the belt strap pockets like the Osprey.  To get any food out of the pack, you basically either have to take it off or ask someone to get it for you.  No big deal if you're stopping, but a little pain if you're on the go.  Also, this is designed for women, and the shoulder straps feel a little close on me.  I've got kind of broad shoulders, so it might be fine for most women.  Amazon.com has it for $60, but I think when I bought it from TheClymb.com it was listed around $50...but I got it for the cost of shipping with a $50 credit from the website.  Score again!
Labels: asics camelback trinity pack gear nike osprey manta pack smartwool specialized hardrock disc