If you give a girl a bicycle

If you give a girl a bicycle, she's going to want to ride it.

But first, she'll need a helmet.

When she goes to buy the helmet, she'll probably pick up a bike computer, too.

Because her sense of direction is lousy, she may get lost and inadvertently ride 20 miles.

She'll realize if she can do 20 miles accidentally, she can ride 30 on purpose...after she buys some bike shorts.

She might get carried away and register for a week-long bike trip. 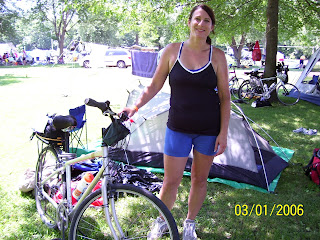 She'll have so much fun that she'll sign up for a century. Or two.  She'll discover that miles are much shorter and much longer than she ever thought, and that 8 hours is always better on a bike than in a car.

For 100 miles, everyone who passes her will say, "You need a road bike."

She'll agree, and then she'll start saving for a road bike.

She'll find out that doing something alone is a thousand times better than sitting at home resentfully when no one else wants to go.  Somehow, she'll never make it through a ride without having at least one conversation with a stranger.

When she starts logging her training on Daily Mile, she'll meet some local bike friends.

She'll join their club and meet a ton of awesome people.

If one of them does an adventure race, she might get hooked and use her road bike savings on a mountain bike.

Instead of giving up, she'll enter a race.


She'll replace "I could never" with "I wonder if I could..." and discover the answer is an emphatic yes.

She'll learn that, while 20 degrees is not necessarily cold, 102 is always hot...and neither temperature has to keep her inside.  She'll remember when she spent Saturday mornings sleeping in, and then she'll go hug her bike.

When she writes about biking, her friends might say she's crazy. But then they'll say they'd like to do that, too.

Eventually, someone will sell her a road bike. She'll win a small race.

Emboldened, she'll enter a local crit, where she'll fall on her face...but she'll meet a girl who races cyclocross.

After reading enough CX posts on Facebook, she'll want to go to one of the races.

And chances are, once she's there, she's going to want a new bike.
Labels: apologies to Laura Numeroff bicycling gateway drugs