By the time we'd made our way through the woods, the trail, and onto the road, our roller coaster of a race seemed to have smoothed out.  Though emotions and terrain had calmed, with the clock ticking and 8 miles to go to reach the bikes, this was no time to let up.  I still felt good, but it would be a lie to say I wasn't thankful we aren't much of a running team.  The most running I did on this leg was to catch up with the guys after stopping to use the bathroom, and that ended in more of a fast walk.

In some ways, this was the nicest part of the whole race.  It was a beautiful morning, nothing was going wrong, and we were all united in one goal: keep moving forward.  We talked and joked and laughed and marveled over the amazing luck we'd had with weather.  It was good team time.  At the same time, it was a little bittersweet with the knowledge that the race was drawing to a close.  I wasn't ready for it to be over.

"Hey Luke, you know where we are?"

I wasn't ready for the race to be over, but about halfway through our hike I was ready to be finished walking.  Still feeling good for the most part, the past 25 hours were starting to wear on me.  I sidled up next to Bob.  "Since Luke's still under the impression that I never complain and I don't want to spoil it this far into the race, I'll just tell you: my feet are getting raw from these wet socks, my knee is a little achy, and I'm pretty much over this walk." 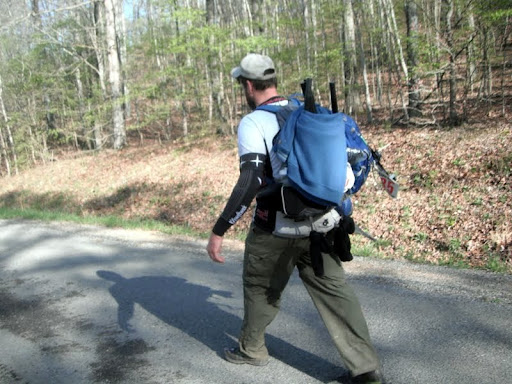 Around the same time, Luke told Bob we only had about 3-4 miles left, then looked at me with an expression that I interpreted as, Ha ha, it's really much shorter.  I spent the next half hour or so loking for the bike drop around every turn, but eventually it because clear that Luke had been serious.  As we closed in on the bike drop, the hills seemed to grow, but we were on a mission.  We had to beat that deadline.

We made plans for a quick, bare minimum transition.  Anything but actual gear would be left in the drop bags.  As we walked, Bob dug out his bike shorts, and then I handed off everything I was carrying to the guys (the one time this race anyone had to carry my pack, I hope they appreciated the gift I gave them) so I could change out of my long sleeved shirt on the go.  When we reached the bike drop and checked in with the volunteers, everything went according to plan.

With just over an hour and a half left to reach the finish line, we ended the 2.5 hour hike between the last orienteering section and the bikes and flew through our quickest transition of the race.  At least 15 miles separated us from a penalty-free finish, and we desperately wanted to hang onto all our hard-won checkpoints.  With no time for modesty, I ignored the volunteer watching us from his car, tugged my borrowed jersey as far down as it would go, and traded my trekking pants for bike shorts.  26.5 hours into the race, with exactly 90 minutes left, we jumped onto our bikes and sprinted down the gravel road in the hopes of beating an 11:30 deadline.

All I remembered was the long screaming downhill we'd get to ride again, and I managed to leave my hands mostly off the brakes for that, but somehow I'd forgotten some of the hills we'd apparently walked down on our way to the bikes.  They were much more memorable riding up them.  My poor, sleep-deprived brain attempted some calculations: Ok, if it's 15 miles, all we have to do is ride a 10mph pace for the next 90 minutes, right? We're on roads, we can do that.  F***...another hill...

It wasn't all hilly, and much of it was flat out gorgeous.  Check out this picture:

We didn't have time to stop and smell the roses (or, in this case, the invasive yellow weeds masquerading as flowers), and this is where my weakness definitely manifested itself.  I am an endurance-pace girl, not race-pace, and it was a real struggle to keep pushing, especially with the challenging route.  None of the bike pictures show it, but the bike back to the finish had some big climbs that made a mockery of Luke's earlier assertion that LBL wasn't as hilly as Berryman.  Maybe halfway into the ride I admitted to Luke, "I'm about at my limit here." 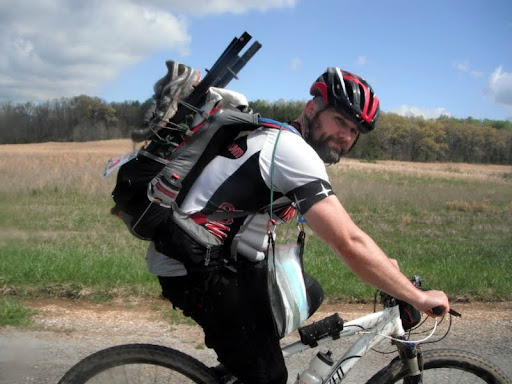 At one point, Luke asked, "Do you want to take the trails back?"

I looked at him in disbelief.  "No!" I started to say, then reconsidered.  The last thing I wanted to do was to try and hurry on singletrack, but if it would help the team..."uhhh, is it quicker?"

"No," he answered, and in fact there were no trails to ride at that point, but my ability to catch onto any joke had dwindled as the hours had passed.   This was only the second time in the race that I pulled the girl card, the first being when Bob and Casey wanted to portage between paddle CPs 11 and 10.  "I'll do it if you guys want to, but it would be really hard for me to carry the canoe that far."

With 20 minutes left, we passed a sign reading Piney Campground [the finish]: 5 miles.  I struggled with the math: Ummm, 5 miles in 20 minutes...that would be like 15 miles in an hour...so we just have to maintain a 15 mph pace... We had now been racing for 27 hours and 40 minutes.  We were pushing harder than we had at any point in the race except perhaps the death march.  I don't know about the guys, but for me there was no more wistful thought of oh, it's almost over.  There was only the desperate need to reach the finish line.

And there were hills.  On two different hills, Bob rode next to me with a hand on my back giving me a boost up the hill. While it stung my pride a little to need the help, it made a huge difference, and I was much more worried about getting to the finish on time than on appearing strong.

Piney Campground: 2 miles  Minutes left, and another hill.  By now I wanted to cry.  I didn't have a watch on and had kind of lost track of whether we were minutes away from the first deadline (loss of CPs) or the second (disqualification).  Having been DQ'd for missing the cutoff in September at Berryman, the last thing I wanted was another unofficial finish. Luke pulled ahead of me, and I grabbed his wheel.  Pedal, pedal, and pray the oncoming cramps hold off until we cross the finish line.

Finally we saw the campground and finish line ahead of us.  For me, at least, the pressure was intense.  Do. Not. Let. Up. We came screaming through the archway to cowbells and cheers from the handful of race staff still there at 11:33, and it was over.

Coming in 3 minutes past the 11:30 cut-off cost us 3 CPs, but we were official finishers.  It was over.  We'd actually covered 20 miles in that last 90 minutes, and I felt every inch of them.

We made a beeline towards a table piled high with BBQ pork and dished ourselves the first "real" food we'd had in over a day.  Standing there, I felt tears start to come.  I wasn't sad, I wasn't happy, I was just...spent, I think, from the effort of the day and especially the last couple hours.  Embarrassed to cry in front of my team, I laid down on the picnic table bench and covered up my face.

I wore the team jersey all day and have seen hundreds of pictures of it on the Team Virtus website, but I didn't realize there were words on the side until I saw this picture.  It's ironic that "strength" is showing during my weakest moment of the whole race.

A few minutes later I was calm and wolfing down my BBQ with the rest of the team.  It was just us, the race staff, and the few volunteers left at HQ.  The parking lot was empty, and the other teams were long gone.  The guys have long made a point in the past of saying how, no matter how much they admire the top teams, they have so much respect for those teams who are struggling across the finish line last, just for the joy of being out there.  Suddenly we realized: Today, WE are that team we respect the most.  Oh, the irony.

It was the perfect tweet to wrap up our experience, but alas, it was not to be.  At 11:59, just one minute before disqualification from the race, the Hoosier Daddies crossed the finish line.  We all sat in happy solidarity, picking away at still more BBQ, as we talked to Gary and Ellen from BonkHard.

I'll admit that when I first heard that Jason was selling BonkHard, I felt a little disappointed.  What? You can't quit me, Jason! I'm just starting.  Having done two of Gary's races now, Castlewood and LBL, I am one satisfied customer.  I've loved the races, he and Ellen are fantastic...and they've even conscripted what seems like half of their wonderful family into volunteering.  One of the perks of being practically the last team across the finish line was getting to talk to Gary and Ellen afterwards and hear about some of the thought that went into the course design and race structure.

It turns out that there are limits to just how much Team Virtus can eat after a race, and eventually we had to push back from the table, load up the Virtus Van, and head to a hotel for much needed showers and sleep.  It was perhaps not the smoothest maiden voyage for our coed version of the team, but we came through it as a team.  If we can stay that strong--and have that much fun together--when it seems like everything is going wrong, just imagine how unstoppable we'll be when things fall together.  Even with the challenges we faced, it was one of the best experiences of my life, and I'd go back there, with the same exact team, tomorrow. 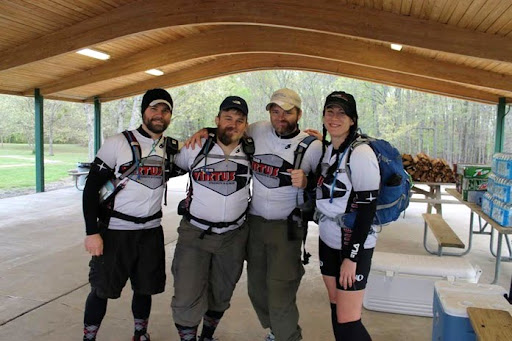