I've got spirit, yes I do

I've got school spirit. This is school spirit week, and each day has a different fun (or "fun") dress theme. I love spirit week. It adds such a sense of lightness and fun to our days. Monday was Sports Day. Oops...total fail. I forgot. Tuesday was Decades Day, and I just happened to have a poodle skirt I'd made ten years ago for my father-in-law's 60th birthday party. 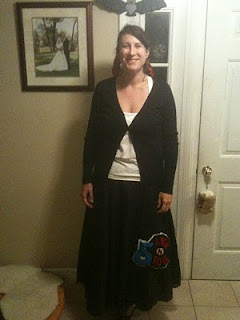 You can't tell from the picture, but the skirt has a characteristic "Kate touch"...it's been waiting ten years for a hem.

Today was Fashion Disaster Day. It's more difficult than you'd think to dress badly. For one thing, you want it to be obvious that you meant to dress like that. I think I was pretty successful from the waist down. What do you think? 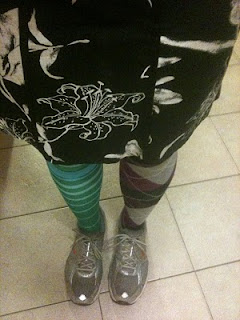 I unexpectedly fell in love today. With the socks. Not together, of course.

I've got birthday spirit. J turns 7 tomorrow, but we had a joint party with his cousin, whose birthday is five days before J's. My baby is growing up. Sniff. 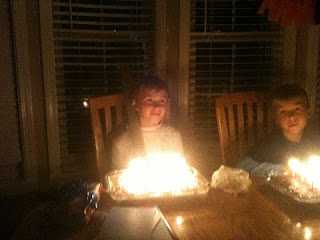 Note that his birthday suit, so to speak, is a white ninja outfit. So he's not growing up too quickly.

I've got competitive spirit. Today the training plan called for a 5 mile tempo run: 1 mi warmup, 3 miles at 8:49, 1 mi cool down. 34 degrees when I headed out at 5 this morning. Running tights, long sleeve technical t-shirt, hat, fleece sweatshirt, and gloves.

The warmup mile was fine, other than some mental dialogue along the lines of it's freaking cold, this is stupid, I can't run that fast. So I told myself that even if I blew the paces, I was at least still out running...and myself shut up. (10:30 pace)

Mile 1 of the tempo run I was pushing, but didn't feel like I was dying. (8:37 yaaaay). Mile 2 was much more difficult, and the second half featured some serious bargaining to keep my legs pushing. I may have promised they could run the third mile as slowly as they wanted if they finished mike 2 strong...it's all a little foggy now. They pulled through for me. (8:35).

With two miles at goal pace, of course I had to renege on the deal and go for it, but my legs got me back about halfway through by tripping over nothing, and I went down hard. Naturally, this happened shortly after I took off my gloves and pushed the sweatshirt sleeves up, but my right knee took the brunt of it. 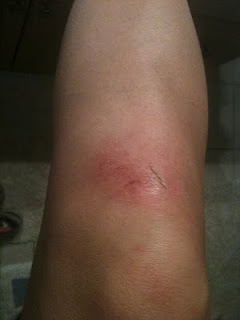 I was afraid I'd ripped my running tights, but they survived intact.

My first thought while I was lying there on the ground was I'm turning off my stopwatch! Then I decided to show my legs who was boss and finish the run. (9:22). Total time for the 3 miles was 26:34 I think for an overall pace of 8:53/mi according to Daily Mile. Sooo close! Anyway, I limp/jogged the last mile for my cooldown in 10:58. My students' reaction: "You fell AGAIN???"

By the end of the day, both hands and my left wrist were a fairly sore...great timing with tonight being my first night of my basketball league. On the other hand, I'm a terrible shot, so being a little hurt couldn't do much damage to my game. And slightly gimpy or not, I had a blast...even made a few baskets!

I've got a lazy spirit. I'm sleeping in tomorrow. That scheduled 4 miles is going to have to wait til after work! :)