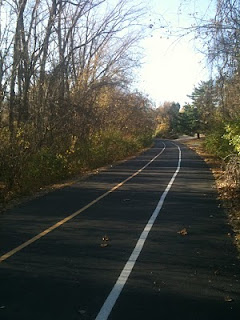 Well, today I was supposed to be running a 5 mile trail race at Quail Ridge Park, but my ex-husband's car is broken down and he couldn't pick up the kids (he lives about 20 minutes away) or take N. to his practice (today) or tournament (tomorrow).  Jeff had offered to take N. to practice so that I could still race, but then J. ended up having a Cub Scout activity.  You know how it is with kids...you're always running somewhere.
So...I made the best of it and did my my scheduled run on Grant's Trail.  It was a beautiful, sunny, chilly morning.  You can definitely tell it's fall.  The trees are looking bare, the leaves are golden, and there was frost on the ground.

I've been pleasantly surprised by how not awful it is to run when it's cold.  It was 32 when I started this morning, and I was pretty comfortable.  I do think I need to figure out something different with my tops.  I again wore a long-sleeve technical t-shirt with a fleece sweatshirt over it, and I was pretty damp when I was finished...is that just how it would be no matter what, or do I need to wear something different when I run in the cold?

My scheduled run for today was 9 miles at a 10:24 pace.  Usually I run my easy runs without an eye towards the pace.  That is, I watch it, but I just go out and run what feels easy and figure the pace is what it is.

What wasn't easy was getting out there.  It's weird.  I was looking forward to getting my run in, and I was stuck over there for about 2 hours anyway, but I had a really hard time making myself get out on the trail.  Even there, I had a decided lack of motivation.  You know it's a bad sign when you start counting down the miles at the first .5 mile marker...8.5 miles to go...sigh...

You know, if I waited til I felt like running to go and run, I don't know if I'd ever get out there.  Certainly not regularly.  For the most part, I wasn't running hard enough to be tired, so it was just a matter of keeping strong mentally.  There were so many times I felt like stopping to walk...just because I was tired of running (not tired from running).  And then the little aches and pains that make you wonder if you're hurt.  As backwards as it sounds, though, the run got easier as I put more miles behind me.  Once I got to about 3.5 miles, I was feeling better about being out there and stopped the obsessive counting down how much time was left. 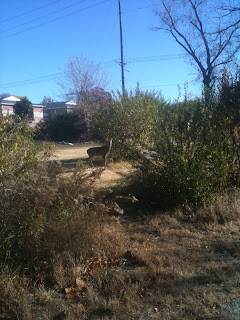 I ran an out and back route, and on the way back, a small buck ran out of the woods and ran ahead of me for about .25 mile.  It's not every day you're paced by a deer!  I tried to get a picture of it running the trail, but it was too far away by the time I got my phone out.  It ran behind some brush on the other side of the trail, and I had the biggest smile on my face.  That's definitely not something I'd have seen if I had given in to my slacker impulses and spent the morning reading during N's practice. 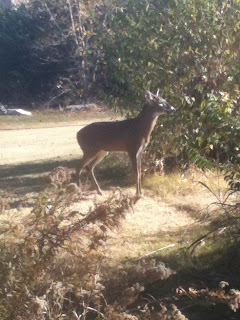 I ran a little past where the deer had disappeared, heard some movement in the brush, and there he was. I stopped and grabbed my phone. He just stood there and looked at me, smoky breath puffing from his nose. I took a couple of pictures, then waved and took off again. Well worth losing a minute or so on my time! :)


The rest of the run was fairly unremarkable.  I tried picking up the speed for several intervals during my eighth mile.  The first few times, I worked on fast foot turnover for 30 steps of my right foot followed by a recovery jog.  The third time I did that, I realized that I wasn't breathing hard at the end of the 30 steps and decided to go for 40 instead.  That definitely had me winded, but I did a few more of those until I hit the 8 mile mark.  I took the last mile as a cooldown run. 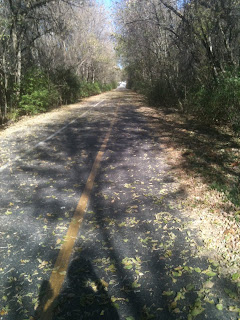 Mile splits from the run:

Ran a negative split--second half was about a minute and a half faster than the first half, even with the time stopped looking at Mr. Deer.

Kind of funny/blonde moment here.  As I was finishing my last mile, I had looked at my time to check how close I was to the end of N's practice and realized I was close to finishing in an hour and a half.  My 10 mile PR (set during my half marathon) is right around 1:30.  So I pushed a little at the end and finished the whole run in 1:30:24.  I was kicking myself a little for those 24 seconds screwing up my PR.....until I remembered I'd only run 9 miles today!  Doh!

Overall, and particularly after I got over the mental struggle, it was a great run.  The trail wasn't too busy...several walkers, a few bicycles, and a couple other runners.  I had some twinges here and there, but I made it through the run without having any big issues...or falling, which after my last run is on my mind again.
You know, I've fallen and gotten hurt more in the past year than in my entire adult life.  And yet, in a lot of ways I feel happier and more alive than I ever have.  It has been and continues to be a great experience to push myself to see what I can accomplish, not measuring myself by anyone else but against what I could do,  can now do, and want to see if I can do in the future.

Of course, after my run, the running for the day wasn't over!  N and I headed back home, and after showering we went to Walgreens to get him a physical at the Take Care Clinic.  Unfortunately, they were closed for an hour for a lunch break, so I took him back home, picked up my blood pressure medicine, washed a few dishes, and we headed back out there.

Why is the boy getting a physical in November, you ask?  Well, he's decided that he wants to try out for the high school basketball team.  Because, you know, we aren't busy enough.  It'll be good for him, because he spends way too much time watching TV between when he gets off school and we get home, but I want to cry a little at the thought of adding all those evening basketball games to two nights a week in St. Louis for his volleyball.  Goodbye, home...it was nice seeing you once or twice a week!  J., on the other hand, was planning to play basketball in a church league and has decided not to because, in his words, "I don't want to be too busy".  Between PSR and Cub Scouts, I think it's a good decision for him, though I'm torn between relief and disappointment.