All week the forecasters predicted snows of 2-6" for Wednesday/Thursday.  I had steeled myself for a measley 2 inches and going to school today while my kids stayed home in a television-induced snow day coma.  Instead, I woke to 10.5" of snow with an eventual total of about a foot.  This is easily the best snow we've had in the seven years we've lived in this house, and we made the most of it.

We started the day off with blueberry pancakes, because occasionally I'm a good mommy and make my children breakfast.  Then, it was off to shovel our driveway.

You can fit about 6-8 cars in our driveway, which is lovely for parties and no fun when it comes time to shovel off a foot of snow.  Just sayin'.


Next, it was off to scare up some work shoveling driveways in our neighborhood.  I work with the kids, and you can bet I'm taking my share of the money, which is being saved towards a pair of waterproof pants for my adventure race.  J., well-trained through Boy Scout popcorn sales, was all about being the one to knock on the door.  We only managed to get two customers, though, which was both good and bad.  I'd have liked to make more money, but I was beat by the time we finished the last house.  And very glad to have two strong teenage boys to share the work.

We took a break for hot chocolate and chili, then it was time to play in the snow.  N. and J. teamed up against me and built a pretty cool snow fort.  It had a tunnel...

Even the dog got in on the act!

Does his beard not remind you of this guy? 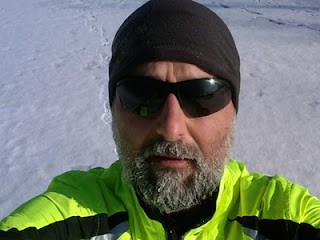 So, anyway, the boys' snow fort was pretty cool, but I think I did a nice job on mine, too.


And that wasn't the end of the snow day fun.  After Jeff got home, I headed out the the trails at our local university for a short run.  I didn't plan to run long at all, but it was so snowy that I hated to pass up the opportunity to get out there.  I figured I'd jog around a little, take a few pictures, and head back home.

When I got there, though, I was suprised to run into Patrick (who'd already been out running in the snow once) and some of his friends from Metro Tri Club (which I've been hovering back and forth about joining and think I'm ready now to actually sent that $15 check) out for a trail run.  They were kind enough to let me tag along for a half hour or so before I needed to head back home.  It was a blast! And my new trail shoes, while slipping around a little in the snow, did just fine too.

And some random snow pictures from the way back from the run.  I was mostly playing around with the Hipstamatic app on my phone and enjoying the scenery.

All in all, it was a Very Good Day.  Hope yours was, too!
Labels: hipstamatic icy beards metro tri club snow day snow forts trail running