I've been called out a few times lately, both in person and online, for being too hard on myself as far as my training goes.  Hearing this from different sources, it made me think.  I am, I guess, but there are a few things behind that.
I'm comparing myself to them, not me.  I'd been thinking over what I'd been told about being too critical when I read this today.  It's by Stacey at RBR, and if you don't read her blog you probably should.  She's hilarious and is a kind of unlikely athlete who has accomplished some major things.  She's also currently raising money with Team in Training.

On Saturday, I ran 5 miles, outside without stopping. I was really proud I could do it. It has been a long time since I have gone that far without walking. I did not want to write that because I was getting caught up in where I have been previously with running. Didn't I run a 50K last October? Who gives a shit about 5 miles?


I have always believed you have to take your wins where you can get them. You start from where you are, not where you were, or where you want to be. I have done some pretty cool (and frankly shocking) long distance running. Does that mean I do not get to be proud of myself again until I run 35 miles? Fuck that. I am more of an instant gratification girl. I would rather be proud now.

And you know what? I would rather be proud now. Instead of being almost at the point of tears once today because I could not keep up and everyone had to keep waiting on me, I'm going to stop comparing myself with all of the experienced riders (and with the braver newer ones) and just remember where I started and be proud of where I am now.  Am I where I want to be? No, but I'm moving in the right direction. And luckily, I have friends who are helping me get there.

My friend Robin is sponsored by Trek and part of that involves leading some rides.  She and Patrick both made sure I knew about it, and she even picked me up for the drive this morning.  I had a long day and a late night last night, so I was really glad to just be able to ride along.  After the obligatory Quik Trip stop to feed our soda addictions, we headed to meet the others at Lost Valley.

I've run a couple of times at Lost Valley, and today was the third time I've ridden there.  It was actually the site of my first mountain bike ride (well, my first one on a mountain bike, anyway) back in January, as well as a ride with my friend Wendy in April, so I guess it provides a good opportunity to measure progress. (I'm dying to add "or lack thereof", but that wouldn't be kind or gentle.)


*One funny thing about going riding with other bloggers is that there are always photo ops and no one rolls their eyes when you say you need to get a picture for the blog.  I'll be stealing pictures from Patrick and Robin and adding them here once I see theirs.*

The day started off a little cool. Temperatures in the 60's? What's that?  Once we were riding, though, it was perfect.  The trails are in FANTASTIC shape.  The dirt was packed so well that it was almost like riding on the road.  There's a mile or so of crushed limestone doubletrack from the parking lot to the beginning of the Lost Valley trails.  I can cruise on the flats.  One thing that riding my hybrid for two years did for me was give me strong legs (that, and a level of comfort being in the back of any cycling group).  I imagine the lifting I've been doing helps, too.

The first big hill down, though, still scares the heck out of me.  It's gravel, bigger gravel, and rutted.  I was holding onto my brakes all of the way down.  Just like last time, I got to the bottom of the hill, didn't see anyone, and turned.  Pretty quickly, though, I realized that they'd all probably headed up the next hill, so I turned around and had to start up it with almost no momentum.  In the future, if we're starting at the top of a hill, I just need to make sure and establish which way the group will go at the bottom, because otherwise I'm doomed to wander the trails alone.

Well, at least until the group finds me.  I had just finished slogging up the next hill when Robin and Patrick found me and we rode to catch up with the rest of the group.  I could keep up just fine on the doubletrack, but it was a different story on the singletrack.  Until I build more confidence, I'm just going to be slower.

The above dip is almost the first thing you tackle once you get onto the singletrack.  The first time I rode it, I didn't go into it with enough speed and almost ended up rolling back down it.  Today was the first time I've ridden it where I made it the whole way though without having to put a foot down. 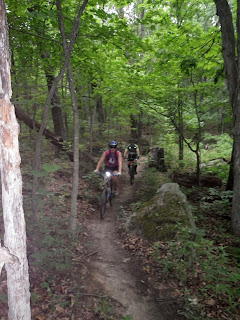 Patrick kind of hung back with me for quite a while.  It was nice of him to keep me company and push me to be a little braver.  Of course, I heard the same refrain from him that all of my bike friends tell me: That would be easier if you kept more speed going into it.  I know they're right.  I guess it's just a matter of building confidence in myself and my bike.  I definitely spent a lot of time on the brakes that first lap, and they were squealing again today so a) the lousy traitors informed on me every time I used them and b) everyone within earshot of me today probably is still hearing that terrible sound.

I rode part of this section with Wendy and made it about halfway up the other side.  I didn't ride it any of the three times we passed it today.  I'm trying to be okay with that and know that I'll work up to it, but I'm also frustrated with myself for giving in to being scared.  Especially when I get up to it and it doesn't even look like that big of a climb.

I noticed today that I definitely do better on gentle uphills because I can just ride without feeling the need to brake so much.  Going downhill still makes me really nervous, as does building up much speed at all.  Since I'm fairly strong on flat sections, I just need to work on climbing hills, too, and then maybe I can at least make up a little of the time that I lose on twisty or downhill sections.

Our second loop today started with another climb.  The climb that seemed like it would never end.  For close to the first half, I was able to stay up with some of the guys, but eventually I dropped behind them, I think when I downshifted.  I definitely spent a lot of that time in my granny gears.  Towards the top of the hill, Patrick rode up next to me and I tried to beat him to catching up with the forward group but I couldn't drp him. :)

I spent more of the second loop by myself, but that was fine.  I was pretty comfortable with the trail and felt better not dragging everybody else back.  You don't know how hard it was to not keep apologizing nonstop to them about making them wait so much.  I just kept thinking about a line that Robin wrote in her report last year about Conquer Castlewood, something like "She should never apologize, she's out there trying" or something like that.  Of course, that lady wasn't holding a whole group of people back.

The second loop went better.  I spent much less time holding onto my brakes and more time pedaling.  I made it up most of the hills, though there were a couple I ended up walking short portions of because I couldn't get over a root or a rock and lost my momentum.  In one of my how to mountain bike books (Patrick and I were talking about the differences in how we learn...he's more of a go out and do it person while I'm one to read all about something...because you know there's no better way to learn to ride a bike besides reading a book about it, right? :P), I had read something about keeping traction going up steeper hills.  Something like pushing and pulling against the handlebars.  Anyway, today is the first time that clicked for me, and I felt like it really helped me tackle a few of the hills.

And the last hill is a doozy.  It's not quite as long as the other hill, but it's still long, and the very top is steep.  Riding up to it, I was already in my smallest chainring in front and wondering if how I was going to make it all the way up.  I was trying to stay mentally strong and not concede to the hill before I even got there, but I knew it was going to be tough.  And it was, but probably my one saving grace is that I've walked up that hill and know it's almost as bad to walk up as to ride up.  I made it to the top, and then we cruised back to the parking lot for lunch courtesy of Trek.  24 miles on the mountain bike and a pretty good day, overall.
Labels: being more patient with myself Chuck Vohsen Lost Valley mountain biking Patrick Albert Robin Rongey training trek bicycles