Bright and early Tuesday morning, I took Jeff and N. to the airport.  They're spending a week in California for one of N's volleyball tournaments, leaving D, J, and I here to resentfully stick pins into their voodoo dolls make the best of staying in Illinios (last year I missed the California trip because I had a week-long bike trip that conflicted with it; this year, we just didn't have the money for all of us to go.  It's a little harder to have a good attitude about it this year...).  Because I feel bad that Jeff has to get up early and work while I'm off all summer, I usually go to bed when he does, but with him out of town I've been staying up late trying to finish an online class and getting (finally) into watching "Lost".  Since J's internal clock is set at about 7:30, it's made for some sleepy mornings.

Losing two of my babysitters (and those late nights) have really cut into my training time this week.  I've made it to the gym for my strength workouts, and I've gotten in a little running and swimming since they left.  Since I had such a full training week last week, I'm not going to stress over it.  D's been working most of the week, but J and I have had some good times.  We met friends at the park and have spent a lot of time at the YMCA pools.

One thing I've been trying to do is walk or ride my bike for more errands.  We live pretty much in the center of town, so it's not too hard...as long as I overcome my propensity to wait until the last minute before going somewhere.  I managed to bribe convince J to ride his bike to the Y to go swimming with the offer of ice cream afterwards but only if he rode his bike.  Since he had a Dippin' Dots gift card, it didn't even cost me anything except the ice cream I ate too.

I lowered J's bike seat so that his feet could touch the ground in the hopes that I'd be able to ride with him, but since this was only his second ride after a winter off the bike, he was still a little unsteady.  Not comfortable with him riding the city streets like that, I ran next to him carrying our towels and stuff in a backpack.  The way there was pretty good, especially once we got to the bike path and I could stop worrying about cars.  It was funny, because as he rode I found myself channeling my bike friends: "Don't look right in front of you...just kind of look ahead on the path to where you want to go"..."you know, this would be easier if you were going a little faster"..."you can do it, I know you can!"  Do as I say, not as I do.

The way back, after swimming...not so fun.  I never had lunch, so by 3:30 and after swimming I was pretty drained.  This time, J was cruising ahead and I was struggling to run anywhere near him.  Finally, I had to call ahead and ask him to stop and wait for me.  The stopping...that's always been his problem.  He slowed down, kind of swerved across the path, and stopped, upright.  He had the biggest grin on his face. :)  Definitely worth the ice cream stop!

He did make sure to tell me, "You know I only did this for the ice cream," but when I said "Isn't it pretty cool to be able to ride your bike places?" he agreed.  I may end up with a cyclist on my hands yet.

Because I've been busy with that class, he's spent a little more time playing on his own or watching TV in spite of my general no TV during school hours rule that I felt guilty enough to be seduced by Family Fun magazine into doing a craft project.  I'm not a crafty person, and as usual, this ended up being more expensive and labor intensive than I had pictured it being.   But still, it turned out pretty cool.


Note that the stencil is pretty saturated.  That turned out to be a bad thing because it soaked underneath and messed up our picture.  On the second try (back of shirt), we used newspaper to blot the excess from the stencil after each go round with the colors.

I think it turned out pretty cool.  We didn't tie dye it because I wasn't sure how the stencil would do with the shirt all twisted up, but I tugged up parts of the shirt so it was wrinkled.  Then, when the spray hit it, parts wouldn't get dye on them.  Each time we switched colors, I re-wrinkled the shirt.  I think it more or less gives the right effect.  Anyway, J liked it enough that today we're working on a new one.  Um...yea...

...and today, our park/pool plans thwarted by rain (which is also screwing up tonight's Shakespeare in the Park and tomorrow morning's mountain bike ride), we hit the gym at the Y to shoot some hoops with my unwilling nephew. 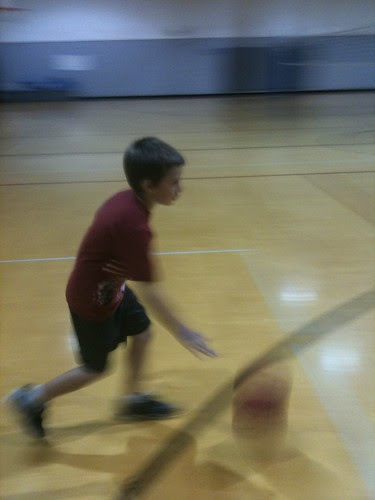 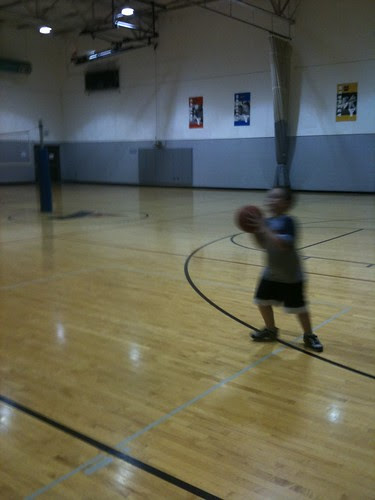 J and A playing ball.  J has been all about shooting baskets in the driveway, and it's starting to pay off.  He did pretty well on the regulation height rims, and A hung in there longer than I expected him to.

Now, I'm back to my online class, and you're pretty much caught up to life around here.
Labels: bike commuting crafts I'd still rather be in California summer