Welcome to my repository of all the Dirty Kanza-related tidbits that didn't fit into my race report(s). Most of it may be of no interest to anyone but me, but I don't want to forget.


I rode a custom Monster Bicycle Co titanium mountain bike. Continental Travel Contact tires (26 x 1.75"). The bike was fantastic, and the tires were great. Good handling and NO flats. In fact, at least 3 more of my friends were using the same tires, and NONE of us had a single flat.  Thanks to Robby for the suggestion.

Also, despite the fact that only an idiot would ride a 200 mile (or, in my case, 160 mile) race using a brand new saddle, that's exactly what I did...and it was the best decision I could have made.  Even after 160 miles, I didn't feel as bad as I did 20 miles into the 76-miler I did on Memorial Day.

I carried two water bottles in cages and a 70-oz bladder in my camelback.  On the bike were a frame bag (where I kept my tools, two spare tubes, and a bike pump as well as a little food) and a smaller bag where I carried most of my food, my map, and my phone.  Had the weather been hotter, I could have carried an additional bladder in the frame bag...and if it had been hotter, I definitely would have needed more water.  As it was, the amount of liquids I carried was about perfect.

I alluded to this in my race report, but it really needs mention of its own. Casey trained all year for Dirty Kanza. He drove all the way from New York to race with us. He was well prepared to kill it. And then he was hit by muscle pain so debilitating that he ended up in the ER the night before the race. Despite his hopes, no way could he ride the next day. 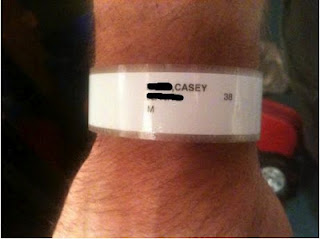 I can only imagine how disappointing this was. My only comparison is the panic I felt when tendinitis threatened to derail my marathon in the month before the race. Factor in the expense and time of the drive AND the fact that this is his main race this year because he and his wife have a baby on the way, and you have a recipe for a world class sulk.

Instead, Casey totally stepped up and kicked ass in the support role, making sure the bikes were taken care of when we hit the checkpoints. Whatever disappointment he was feeling, any time I was around him he was upbeat and encouraging. An ex-MMA fighter, he's a huge guy, but the way he put his team above his own feelings definitely showed that his heart's his biggest muscle. Thanks, Casey!

I mentioned this before, but it bears repeating. The comments on Facebook made a HUGE difference for me. First reading the comments after I made cp2...

...and then standing there in the dark at 9:30 and then again when I was reduced to walking, it felt so good to know that people were thinking of me. I was really close to quitting, but after reading all that I couldn't let my friends down.  Thank you so much. Truly.

I got home at about 9 p.m. Sunday evening to see this on the door.


Since my family's support basically consists of allowing me to participate, the sign was a very touching sight.

Out of the mouths of babes:

Ever since the guys bought me the Go Girl on the way to LBL, I can't stop to pee without hearing the now familiar phrase "You go, girl!" J was asking me some questions about going to the bathroom during the race. I explained that, while I was able to wait until I got to the bathrooms at the first two stops, I peed on the side of the road (actually, in the middle of the road, just because it was pitch black, I was all alone, and I could) during the last leg.

His response? "Did you use your go girl?"

You are what you eat:


I knew I didn't do as well with my nutrition as I should have, but I was shocked this weekend when I finished unpacking and realized that I'd eaten maybe 1/4 of the on-bike food I'd taken. Even when you consider that I didn't ride the last leg, that still put me at a serious deficit.

Here's my best guess of what I ate:

The on-bike stuff works out to a total of around 2,400 calories, which sounds like a lot until you realize I burned around 4,646 in the first 85 miles. There's no way I ate even close to enough.  I guess it's not so surprising that I struggled.

The Princess and the Pea (gravel) 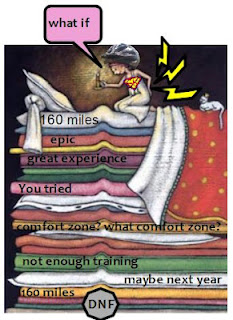 The Princess and the Pea story (for those of you who've never heard it and are wondering WTH I'm talking about).

I've gone back and forth about including this part because I hate to dispel the idea that I have this great, positive attitude, but I strive to be real here and this is how I really feel. I want to have this next year to look back on and remember.

Despite the facts that I know 160 miles is nothing to sneeze at and that I barely trained and that I had no expectation of being able to finish Dirty Kanza, my DNF wields a surprising sting. I mean, I'm not staying up nights crying or anything, but it bothers me.

I wonder, what if I hadn't been so sure I couldn't ride that third leg, hadn't stalled at CP2, and hadn't spent so much time taking it easy after finally leaving? Other than my knee, which is still sore, the rest of my body felt fine by Tuesday, which makes me think I didn't push hard enough.

I tend to have pretty low expectations for myself ("participate" and "attempt" rather than "finish", for example), and maybe I'm too accepting of mediocrity in myself. What if I held myself to a higher standard? And, now that I realize how badly I ate during the race, I can add...what if I'd handled my nutrition better?

I mentioned during the race that I felt like the favorable -- almost miraculous -- circumstances (awesome bike, perfect weather, fantastic team and support, NO FLATS) were God's way of challenging me: "You think you're tough? Well here you go...I took care of everything but the pedaling. Either you have it or you don't, but you aren't going to have any excuses."

The fact that I didn't have it is going to be the pebble in my shoe for the next year, but it should make for good training inspiration.

And don't think it's going to make me stop attempting things that are ridiculously out of my reach. In fact, I'm pretty sure I know what my next big thing will be; I can tell it's the right decision because it makes me sick to my stomach to think about it.  Game on.
Labels: bike setup Dirty Kanza 200 encouragement nutrition what if