I spent my oldest child's 20th birthday volunteering at the Castlewood 8-Hour adventure race.  I didn't even have to feel guilty about being gone all day since he was out of town visiting friends. My team had actually planned to race, but we encountered uncooperative work schedules...and didn't get around to signing up in time for early registration fees...and somehow registration closed without us ever signing up.  It didn't break my heart; I'd been invited to race with another team as well, and even though it would have been a blast I'd turned them down thinking if Virtus couldn't field a team I'd just volunteer.  My heart may have broken a little if BonkHard owners Gary and Ellen hadn't been able to use me, but thankfully they had a job for me.

I raced last year and really enjoyed the unseasonably warm temps in the 50's after volunteering in the previous year's 30 degree weather.  The 2012 edition of the 8-hour had even better weather, though.  I think the temperature started in the mid 50's and ended near 70.  It was a crazy nice day to spend sitting in the woods. I'd planned to get there plenty early so I could visit with all of my friends who were racing, but being me was lucky to pull in about a half hour before the race start.  I still had time to say hi to most everyone I knew (priorities, you know), and while it was a little nice to feel so relaxed about my day, I was also a little sad not to be racing.

In addition to visiting with "real-life" friends, I also got to finally in-person meet some AR Facebook friends, including my friend Bethany who suprised me with an awesome gift.

I had thought maybe I'd be paired up with my friend Emma, but instead I was working with someone I'd never met.  I wasn't worried about it at all, though, pretty much every adventure racer I've met is pretty awesomeOnce the racers took off, I met my partner, Dave, and we got the lowdown on our assignment from Gary and Ellen.  We were going to ride our bikes to a checkpoint on the bike leg where we were to punch teams' passports and hand them a map to a "surprise/bonus" orienteering leg.  Basically, the teams expected that they were just riding to a regular checkpoint, punching their passport, and moving on; instead, when they got to us they had to drop their bikes and take off on a short trekking leg.


We followed Gary to our spot, passing teams on the trekking leg as we drove.  Being somewhat navigationally challenged, I appreciated that Gary was leading us.  We had a short drive, then a 1ish mile bike ride.  The trails were pretty flat, which was a good thing because I was wearing my backpack (no big deal) and carrying the tote bag that had our volunteer paraphernalia in it (more difficult).  It was a pretty straightforward route, so I didn't pay much attention other than following Gary.

You can't tell from the picture of our checkpoint (#21/40), but the trails surounded it.  Because it was such a beautiful day out, there were tons of people out on their bikes and we spent a lot of time answering questions about the race...no hardship, because the next best thing to adventure racing is talking about adventure racing. :)

Because our checkpoint was pretty early in the race it gave us the opportunity to see everyone racing and for me, at least, gave the chance to experience a much different side of the sport than I normally do. We're a pretty mid-pack team at best most days (at least when the guys race with me!), so it was really interesting to watch the way the top teams transitioned and interacted.


It was also a little stressful, too. Obviously the fastest teams are the first ones to arrive, so I wasn't in any kind of a rhythm when they got there. People who are truly racing to win don't seem to appreciate you fumbling with the punch and finding the correct box to punch at anything less than the speed of light.

The first teams were in and out of our checkpoint like lightning, grabbing food and eating on the go, some not bothering to change out of their bike shoes for the short (~2 mi) trek. Some were mighty abrupt with each other, too. I guess a combination of pressure, highly competitive people, and having raced together long enough to not tiptoe around each other will do that, but the middle of the pack sure feels friendlier!

Of course, not everybody was crabby with each other, and almost no teams were grumpy with me.  Dave, who'd ridden off to deliver a message from Gary to some other volunteers, got back soon after the first teams left on their trek and took over the clipboard where we logged teams in (and, later, out) while I handled the passport punching and map distribution. The very first teams were in and out of transition so quickly that I forgot that I was also supposed to be taking pictures, so I did my best to make up for it after Dave got back.


Lots of friendly faces out there... 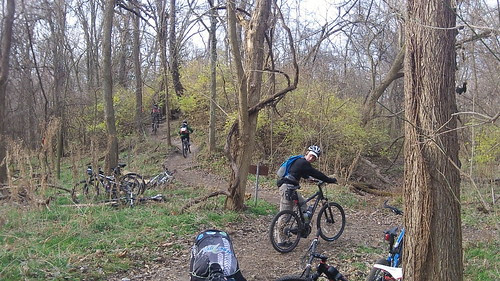 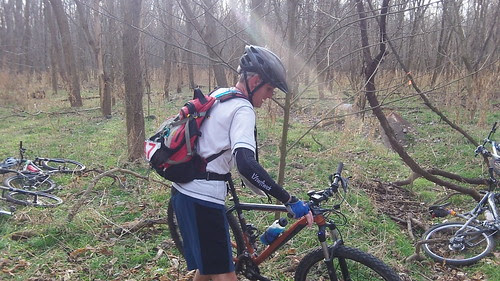 Joe and Bill of Iowa Wolfpack, who I never managed to get in the same picture (sorry!)

As more and more teams made it to our checkpoint, Dave and I worried a little about making sure to get all the teams logged in and out (the information would be used later for splits), but we made a good team.  There was no shortage of conversation during lulls between teams, and it was fun to get to talk with the racers who were arriving.  They met the news of the additional o-leg with a variety of reactions, ranging from amused non-suprise from those who kind of expected something like it...to "ok, let's go"...to something like a grade schooler who just got assigned extra homework.

One of those teams came back and told me, "We were cursing your name for talking us into doing that leg...but we didn't know your name."

"Damn you, Shelly!" they called as they rode away.

Unfortuanately, I also talked the only other 4-woman team besides my ROCK Racing friends into getting a couple of the checkpoints on the bonus section.  I guess last year they'd missed the time cut-off and either been disqualified or lost too many CPs to the penalty, and this year they were determined to finish (shades of Jim and I at our two Berryman experiences).  Though they'd decided ahead of time to skip this section, I convinced them to go for a couple points.  They ended up finishing with the same number of CPs as my friends but a faster time.  If I'd kept my big mouth shut (OK, that rarely happens), my friends would have won their division. :( Sorry, guys!

So simple.  So smart.  And I was so completely oblivious to the fact until he said it.  Because one team had skipped the o-course without telling us and we'd missed signing another out, we might have been pretty confused without Gary's knowledge bomb.  As it was, eventually all the bikes were gone and our job was done.  We packed up, loaded up, got on our bikes...and promptly got lost.

Not super lost, but we didn't get straight back to our cars by any means and ended up having to jump onto the road rather than wander around longer on the bike trail.  Actually, it was a great day to spend some time wandering on the bike trails, but we had stuff to get back to race HQ and I was realizing anew the benefits of padded bike shorts over super thin running capris.  Despite our navigational challenges on the bike, Dave led us straight back to Castlewood, where I spent the rest of the afternoon eating pizza, visiting with friends, and writing down the numbers of teams as they finished.

All in all, a pretty nice way to spend the day.