After Saturday's race, I basically spent the rest of the night sulking.  I know that it makes no sense for nearly identical times to be a hard-earned victory one year and a colossal defeat the next, but like I said in my pity party blog post, I was content with my time.  I was just upset about how crappy I felt throughout the race.

Well, I hear you suggest, it's possible that actual training would improve your race experience, and of course that's right.  But just a month ago I ran a 30k with a similar lack of training, and while it's true that the last 6 miles hurt enough to make me whimper, that was because of my knee and troublesome butt muscle.  The running part was great. I'd actually enjoyed a pretty wonderful first 20k on a course that, despite its location, is no walk in the park.

The contrast between these two most recent races threw me.  How could I run 18.6 miles without training but not 7.8? Why did Pere Marquette feel so terrible? I'm pretty used to gutting things out on minimal training, so what changed that I'd long to quit not two miles into one of my favorite races? Eventually I realized that I'd almost completely neglected rule #1.

﻿ Ah, Zombieland. One of my favorites, despite a general distaste for my husband's beloved horror movies. And so very topical this week. When I started really thinking about the difference between my non-training for the two races, the light bulb went off. 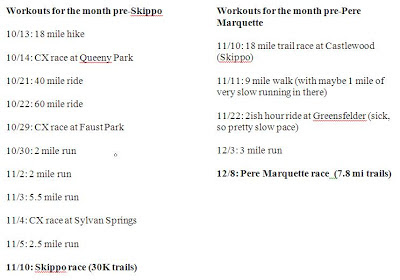 While thanks to the Skippo I did do more running in this last non-training cycle than the first one, it was almost a month before the race.  Initially, in comparing training for these two races I'd only thought about running.  Only 12 miles pre-Skippo would make you think that the 21 before Pere Marquette was sufficient, if not ideal.  There were two big differences though.  First, my pre-Skippo miles were much more evenly spread out across the month.  Even more importantly, October featured a lot more time on the bike.

I've never found my running to help my biking, but I think that biking definitely boosts my running.  Other than the weekend of Oct. 21/22, none of the bike mileage was high, but I spent each of those 45-minute CX races at the edge of my endurance.  Though I'm sure the more regular running helped, I think the big difference was the cardio.  My body was used to working hard before the Skippo; in the month leading up to Pere Marquette it was used to...sitting on the couch.

Much like the way I was able to stop crying about my disasterous solo orienteering outing once I figured out my mistake, I'm not upset about the Pere Marquette now that  I understand why it felt so bad in comparison to the Skippo. And I have a new appreciation for the benefits of time on my bike.  I still intend to be more conscientious about my training from now on, but when I blow off a run so I can go mountain biking I'm going to feel a lot less guilty.
Labels: benefits of the bike cardio Pere Marquette endurance trail race skippo 30K zombieland