My new dedication to training coincided perfectly with XLMIC's Jingle Bell Hell virtual race, but I couldn't have missed this year's event, seeing as I had to defend my status as last year's "close runner-up".  Heck, this year I even ran the race, despite the fact that XL neglected to close the loophole that let me bike my Jingle Bell Hell last year (I just went back and re-read that report.  You should, too.  It's pretty funny).

I didn't really have any plans as to where I was going to run until I hopped on facebook Friday during my lunch. 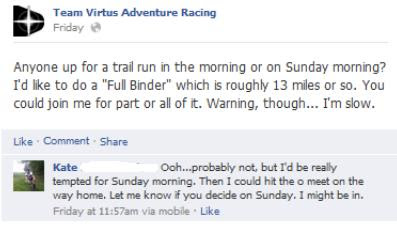 I've run once at Binder Park and mountain biked there a couple of times.  It's a great place, plus I'd be running with at least one of my teammates.  Hmmm...that doesn't sound too hellish, does it?  Well, it's also 2.5 hours away, which explains my "probably not".  By Friday night, though, I'd talked myself into going.  After all, I'd driven that far for 7.5 and 5 mile races, why not a 13 mile trail run?

On the morning of December 16, I rolled out of bed at 4:15 a.m. so I could get my stuff together and make it to Jefferson City.  Hell? Nope, I'd gotten a decent amount of sleep and the foggy roads were really pretty.

The temperature dropped about 13 degrees between my house and Binder, but it was still a comfortable 40 when I got there.  Luke and I had just gotten out of our cars when Bob pulled up.  Sweet! Running great trails with two of my favorite people.  Hell? No way, but it was guaranteed to be a good time.
It's impossible to spend any amount of time with Luke and Bob without laughing your ass off.  I can't actually think of anything I can repeat, though.  You'll just have to take my word for it.

The first 6 miles were pretty awesome.  The trails were great, Luke was setting the perfect pace, the guys noticed I've lost weight, and I felt good.  This was particularly nice after struggling so much in my last race.  We stopped for a drink, hung out and talked for a while (like usual, we need to work on our transitions :D), and then set off on a new-to-me section of trail.  Continuing awesomeness...until about halfway through this loop when my hip started complaining.  Luke and Bob had gone ahead of me, so I took it slow and tried to just run through it.

We stopped again at the bridge to drink and talk (maybe we'd transition faster if we liked each other less ;-D), then Bob headed back to his car (after what I think was his longest run ever...which he rocked).  I briefly thought about going with him, but we'd only run 7 miles and I'd driven all that way for 13.  Instead of playing it smart, I followed Luke to the yellow section.

I did all of my half marathon training and all but one of my marathon training runs alone and was fine with that, but now I'm really spoiled by having friends to run with.  Even with the good company, conversation, and Luke's talk about Scott Jurek winning a 100 (100+?) mile race after destroying his ankle at mile 45, though, I couldn't maintain a decent pace.  I was inspired, but my hip was not impressed.  We walked a little bit, but that was just as bad, so again I tried to push through it.  Running flats and uphills hurt, but running downhills was terrible.  Hell? Well, definitely Jingle Bell Hell.

Christina had finished kid duties and caught up with us towards the middle of this loop.  Hearing her call to us, we paused so she could catch up.  Getting started again hurt enough to take my breath away.  Since Luke needed to finish his run so he could get to work on time and I was going to be moving sloooowly, I told Luke and Christina to go ahead and I'd just walk the shortcut.
Like at Skippo, I told myself to just run 100 steps and then walk again, but on my first attempt I made it about 4 steps.  The second I made it 36, but it just hurt too much and I walked the rest of the way.  "Walked" is actually very generous; what's slower than walking? My 8th mile, which may have included the time I was still trying to run with Luke, took 27 minutes.  The last .69 mile took 29 minutes...a smoking 43 min/mi pace, and it was truly all I could do to keep moving.

With no company, I distracted myself by imagining riding the trail on my mountain bike.  As nervous as I'm sure I'd be riding this close to the lake, I was dying to try it out.  I'm sure I'll feel differently when I'm there on my bike again. :)  The trail kicked back out onto the road, and I started hobbling back to the bridge where the drinks were, dreading the thought of the long walk back to my car.  "Luckily" Christina had fallen on the trail and twisted her ankle.  Rather than gimp her way through the last few miles (smart lady!), she offered me a ride back to my car.  My hero!

After catching up for a while in the nice, warm car (40 degrees is waaay colder when you're sweaty and walking than when you're running), I headed for home...via Walgreens, ibuprofen, and one of those adhesive chemical heating pads.  Here's a tip for you: don't stick those suckers on when you're standing if you plan to wear them while you're sitting.

Jingle Bell Hell: definitely accomplished.  And worse than the hip that's still hurting, DNF-ing a virtual race, and ripping the skin off my ass with overly aggressive adhesive, is the frustration of having such a great place to run and such fantastic company...and not being able to do the whole run.

On the plus side, I think it's finally convinced me to go to the doctor and try and get this figured out. It's getting a little embarrassing to keep limping into school on Monday mornings. :)
Labels: Binder Lake binder park hip pain jingle bell hell Team Virtus virtual race XLMIC