My own worst enemy

Today I went to one of my favorite races at a place I love and had what feels right now, at least, like the worst race of my life.  This is saying something, even just in terms of my three Pere Marquette races, since my very first outing here featured ankle deep mud and a smoking 18:09 min/mile pace over 7.8 miles.  This year wasn't my worst race in terms of results, which were acceptable --certainly better than I deserve.  Instead it was my worst race experience, something which had nothing to do with the venue, the organizers, or the race itself and everything to do with my head.

It didn't start out that way.  I've been excited about the race and happily drove to Grafton in this morning's chilly fog. 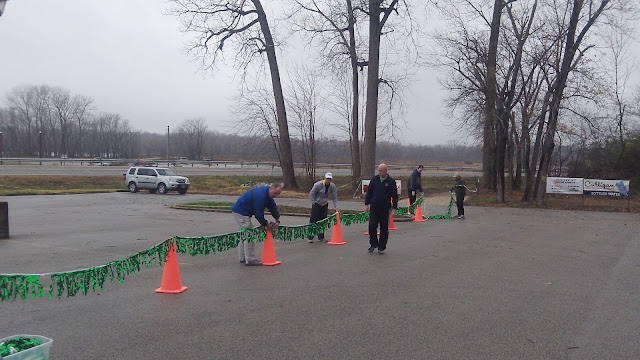 After "helping" set up the start/finish line and then hanging out and visiting with friends in the great hall of the Lodge (though I think I missed about half my friends who were there), I headed towards the start line.  Though I left in plenty of time to make my wave, I still managed to miss my start when a couple guys, having seen so many Skippo shirts, asked me about the race.  I talked with them briefly and then turned to see my wave run off.  Oops.


I jumped into the next wave, to the vast amusement of Jacob and Gary, and spent the first .25 mile turning on my Garmin.  While I'd been irritated about still having such a high wave assignment (19 as opposed to last year's 25), the first mile proved that I actually belonged further back.  As soon as the course started to climb I was dragging.  Jacob and Gary were long gone, Lo ran by with some encouraging words, and then person after person passed me with authority.

It was so demoralizing.  I tried telling myself that the first mile is always tough, it would get better after the first mile.  Of course, mile one ended up on one of the long hills, and it did not get better.

Being someone who makes a habit of running (or riding) races untrained, I'm used to not feeling great, but this was different.  I had to walk once briefly because of my knee and had minute or so when my hip was speaking up, but otherwise my legs behaved.  My breathing was really ragged, though, and I never got into a rhythm.  I wasn't having fun.  The day was gray, but the temperature was perfect for running.  It had rained the night before, but the majority of the trail had drained well.  While I recognized those things, I couldn't appreciate them.   Two miles in, I wanted to quit, but without any excuses I ran on, enveloped in my cloud of negativity.

I carried my own water, so I skipped the first two water stops (saying hi to Cheri and Judy) and passed a few people there.  Normally I'm not fast but I tend to get stronger as I go on.  By about the halfway point today, though, I was realizing I'd screwed up with food.  I'd had my usual almonds and coffee for breakfast and had also eaten a Clif bar about 40 minutes before the race.  Turns out that wasn't enough, and by the 4-mile mark I was teetering on the edge of a bonk.

After struggling up the big hill after mile 4, we had a combination of downhill and flats.  I tried to talk advantage of the downhills but had to do a little walking on one gentle uphill.  In the distance I kept hearing a Tarzan yell.  Running again, I turned to a girl I was passing and muttered, "Somebody's having way more fun than me right now."

Tarzan had most welcome news: "There's a water stop ahead...and they have M&M's." His animation and good mood were contagious, and I smiled for the first time of the race as another Tarzan yell sounded behind me.  Those M&M's were a life saver! I grabbed a big handful and walked while I shoved them into my mouth.  I don't know whether it was the sugar or just a mental lift, but my running was a lot better after that.  "Better" being a very relative term.

Mile 6 crosses the park road between the Lodge and the visitor's center, and the cheers from spectators there were really nice.  JB, who'd finished an an hour, was standing there and asked if I wanted company.  "Yes, please!" He jumped in, started running, and asked what he could do to help.  Since carrying me would probably be considered cheating, I chose distraction.  I tried a little to hold up my end of the conversation but was too busy trying to breathe.

This stretch of the race features a steep hill followed by steep steps, and to add insult to injury there's more hill at the top of the steps.  "OK," JB coached, "When you get to the top of this hill it's all downhill and you're going to run the rest of the way in."  That's not exactly how it happened, but I did run most of the rest of the way.  While I have a lot of room for improvement, one area my running has improved is in going downhill.  I'm not flying down with abandon, but I've gained a lot more confidence and that paid off today.  I passed several people on the last downhill stretch.

The last third mile or so of the course is flat, which was much harder for me than the downhill.  My friend Jim was waiting where the course flattened out and ran with me the rest of the way.  His encouragement was a huge help because I was struggling to keep going and wanted the race OVER.  I wasn't even happy when I crossed the finish line, just relieved.

For anyone who's thinking, Hey dumbass, of course you weren't going to have a great race...you've run 3 miles since the November 10 Skippo race... you're exactly right.  And the thing is, I didn't expect a great race or really even a good race.  I knew I'd have a hard time.  I assumed I'd be lucky to finish within 10-20 minutes of last year's time.  And that was ok.  As long as I beat my 2010 nadir I'd be content.

Looking at the results, I'm honestly shocked that I was so close to last year's time.  I'm content with the results, but not with how I felt.  Always in the past, I've been happy to compete and just see what happened.  Today, for the first time, the cost of racing untrained outweighed the joy of racing.  It sucks to go out and feel like crap and know that you only have yourself to blame.  I keep learning and re-learning this lesson, and I told my friends today that I'm done with not training.  It might be badass to occasionally jump into something untrained, but to do it repeatedly is a bad habbit, and when it makes you unhappy it's just stupid.
Labels: Pere Marquette endurance trail race Pere Marquette park trail race trail running undertraining