When my friends at ROCK Racing and the 100+ Project came up with the idea for National Adventure Day(s) (NADs for short), I thought it was brilliant.  Because NADs fall on October 12 and 13 -- between two big race weekends for me -- this year, I knew that in the interests of marital harmony my adventure(s) would have to be low on the "epic" scale and higher on the "close-to-home/still-leaves-time-for-family" scale. 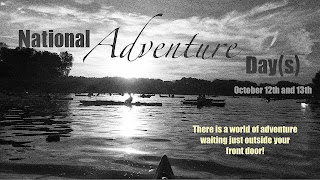 But that's OK, because adventure doesn't necessarily have to be epic to be worthwhile.  For more proof of this, check out Alistair Humphreys and his very cool microadventure concept. Thanks to a combination of teacher institute and the Columbus Day holiday, I actually had a decent amount of time to work with and ended up with a weekend full of fun plans.  Unfortunately, things aren't always rainbows and unicorns and undeservedly good finish times, and this was one of those weekends where, despite plans coming together nicely, things didn't work out quite as I'd envisioned.

Friday: 13.5 miles on the Lewis and Clark trails

I didn't started out Friday with plans, but on my drive to work it occurred to me that my weekend was very bike heavy and with the Skippo 30K coming up in a month it would behoove me to do some actual running.  A quick Facebook plea for company got me a few "I wish"-es (thanks, Johann!) and a friend who was willing to ride circles around me on his bike while I suffered (thanks, Dave) but no running partners.  I headed towards home to run a lonely 14 miles on local trails, but fate took pity on me in the form of Mickey's cancelled meeting and instead I got to run at Lewis (8.2 miles) & Clark (5.3 miles).


The distance was my idea. The location was my idea.  I've run those trails lots of times and love them, and I'm certainly capable of running 13 miles.  Despite all of this, the run was way harder than it should have been. Maybe it was the 84 degree temps, I can't explain it.  I drank plenty of water, I choked down two GU's, and I made it through the run, but by the time I was driving home I felt like I was going to throw up.

All I wanted to do when I got home was to lie down and go to bed.  Since I could hardly do that when I'd been gone until dark and was leaving early the next morning for several hours, I did some picking up, made supper, picked at my plate, then slept on the couch next to my guys while they watched Halloween movies. Quality family time.

Jeff and Jacob have a Saturday morning tradition of going to yard sales, and right now that tradition is followed by Cub Scout popcorn sales.  That left me free until Jacob's flag football game at 2.  Even after 9+ hours of sleep, I was still exhausted from the previous day's run, but I met Mickey and Jeff A. so they could break in their new cross bikes on gravel.  Surely I'd perk up once I was riding.  Typically I can't keep up on downhills (because I'm a chicken) or uphills (because I'm not as strong) but can maintain a decent pace on flat terrain.  Instead I struggled to maintain a 13-14 mph pace on the flat Katy Trail, and when the guys rode up Matson Hill I opted for a snack and a brief nap on the bench.


I basically felt like I was riding through sand all day long.  My legs were dead.  I don't remember ever feeling that bad on a bike...let alone on easy terrain.  It was a beautiful day, perfect riding weather, good company, and I was trying very hard to appreciate all these things while being frustrated and embarrassed by how weak I was.  My only mental saving grace was that both of these guys have at least ridden with me once before and know I'm not always so slow and wimpy.

We rode back through the doubletrack in Lost Valley and I made the guys stop to swing on the gate (it didn't take much arm twisting).  In my mind, road bikes may be for going fast, but gravel riding is for fun and adventure...and what could be more fun than swinging on an old rusty gate into a tree?

By the time we were back on the Hamburg trail (after walking the hill out of Lost Valley earlier than I ever have before), I was considering leaving early.  I felt bad skipping out so soon when we'd planned on riding 4 hours, but the guys could still ride.  Back at the cars, though, Jeff was feeling the effects of his recent intro to CrossFit and decided to head back home.  Somehow I got talked into continuing for another hour.

Hoping to eat my way out of whatever was wrong, I sat down with a slim jim and marathon bar.  We all stood around talking for a while and then Mickey warned me, "Your hour doesn't start until we're riding." Well, shoot...no use stalling any longer then.  We headed off to Busch Wildlife.

This was another of my brilliant ideas.  Busch Wildlife has lakes and some hills and a couple short stretches of singletrack and is infinitely more fun to ride than the flat Katy Trail.  Well, unless your legs are lead weights and breathing feels like way too much work.  We'd ride downhill and I'd almost forget how crappy I felt, but as soon as we hit an incline it was back to the death march. Ugly.

I was enjoying the ride as much as possible while simultaneously watching the clock on my Garmin like a hawk, and my peppiest moment of the day may have been the final stretch back to the car.

I was so tired.  A short nap before Jacob's football game helped, but even sitting at the field left me out of breath.  Jeff kept feeling my head to see if I was sick, and in the end we opted to skip the planned family trip to Six Flags.  Well, I was going to skip it, and Jacob didn't want to go without me...something that both made me feel good and bad at the same time.  The guys put up Halloween decorations, and I slept.  We ate supper, then I slept, waking up the next morning for long enough to cancel my Sunday plans and go back to sleep.

Chuck, Robin, and some friends were riding a Triple Crown, riding to and at three different parks. I've been spending a lot more time on my mountain bike, so I was really looking forward to trying out my improved skills/comfort level on some other trails.  Instead, we picked up most of what we need for our family Halloween costumes and I slept a lot while the guys watched football.  I was bummed to miss out on my mountain biking plans but consoled by the fact that Jacob and I were riding trails the next day.

After last weekend's Take A Kid Mountain Biking Day, Jacob wanted to go back to Broemmelsiek and ride the trails some more, so we loaded up Monday morning and made the hour drive to St. Charles County (for the third time in four days).  I wasn't excited about burning more gas, but I was thrilled that my little boy wanted to ride trails.
When we got there, he wanted to warm up in the parking lot, so we rode around and played followed the leader (he, of course, was the leader).  After nearly a mile of parking lot circles, he was ready to hit the trails. He did great.  I love watching his confidence grow on trails!

We rode one lap (~ 1 mile), and then he wanted to go back to ride more in the parking lot. So that's what we did.  For basically the rest of our time.  We played follow the leader for a while, we raced two laps around the parking lot, and then I worked on bunny hopping and riding "switchbacks" with the parking lot stripes while he rode around.

Not exactly the day I had planned, but I took a couple of deep breaths and realized it doesn't always have to be my way.  We were outside, on a beautiful day, riding bikes together.  Complaining would be flat out ungrateful.
Labels: 100+ project Busch Wildlife gate swings gravel Katy Trail Lewis and Clark trails mother of all bonks NADs National Adventure Day(s) ROCK racing trail running