Skip to main content
Labels
Posted by Kate Geisen May 25, 2009

Last Thursday my school's Glee Club sang at the beginning of the game. So we could get our Cardinals tickets at a discounted price...which is usually the only time we go. It was a great deal, though. We got tickets with a face value of $44 for $12 each!

The new stadium might look really nice, but we definitely don't go there often enough to have a clue how to get anywhere. Jeff opted NOT to do the guy thing--we actually asked directions about 4 times from ushers, and still somehow ended up halfway around the stadium from our seats and up two levels!! It wasn't all bad...while we were wandering around in No Man's Land, I did run into my cousin Glynda.

Unfortunately, while we were over there, Pujols hit a homerun that knocked out the "I" in the Big Mac Land sign. Not only did we miss the homer, we missed one that was super close to where we were supposed to be. If you look at the blonde-haired girl in the picture, the "I" was straight in front of her. We were in the third row from the front. Oh, well. 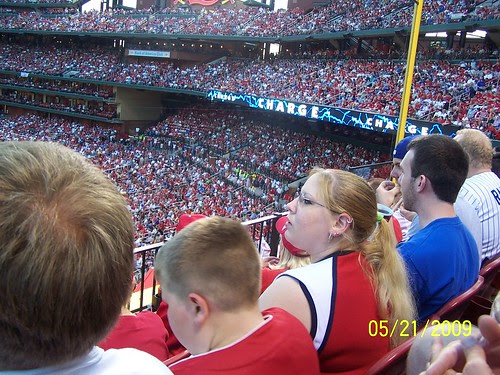 It was a wonderful night to go to the game! The weather was absolutely beautiful, the seats were good, and we were surrounded by people with whom I work (and who I like). In addition, the Cardinals beat the Cubs...and did it in less that 3 1/2 hours. That's my kind of game! I've been known to root for the opposing team if if it'll get us home sooner.