Today's weather was sunny with and the temperature was in the mid 30's, a virtual heat wave after temperatures below freezing for the past week or so.  I had errands to run this morning and was super excited to get out and do some running outside after suffering through three miles on the treadmill Wednesday night.  Now, granted, it wasn't entirely the treadmill's fault that I had eaten a big supper not 30 minutes before running, but it still wasn't a fun experience.

This was a real angel/devil on the shoulders moment.

Angel: I hate how he's so into video games and doesn't spend as much time outside; this would get him outside and active.

I'm gone so much....I don't get to spend enough time with him.  This would be some great time together.

Awesome! I'm inspiring my little boy to want to run! :)


Of course I said he could go.  There was no other answer.  I've been realizing lately that all of my goals are pretty selfish ones.  That is, they're ME centered.  There's nothing wrong with having goals for yourself, but the fact that they're all about me...  Amanda wrote the other day about seeking balance in her goals, and this really spoke to me.  Along with my goals for myself, I need to have goals that reach outside of myself, and too often the things I love are all about me instead of me being able to share them with my family.

So, after getting J dressed for a run in the woods and having to go through three different hats until he was happy with one (can you hear my teeth grinding?), we headed out.

We got about 2 inches (at most) of snow Saturday night/Sunday morning, and despite today's warmer temperatures some of it was still on the trails.  Our run started off auspiciously, with J running ahead of me on the trail.

You'd think the boy had never seen ice.  Or snow.  Or twigs.  He found a tiny icicle that he carried along with him.  He would periodically stop and put some snow into his hand to keep his icicle cold.

We saw sawdust on the snow. 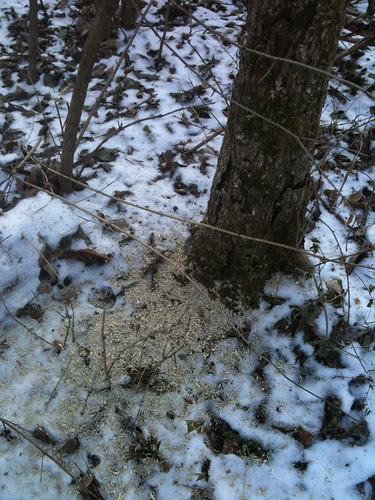 When we looked up, we realized (guessed) that a woodpecker had been at work.


He decided that some of the hills would be a great place to go sledding.  Of course, we hadn't brought a sled along, but he made do...


He felt the need to clear the snow off of nearly every fallen tree that was near the trail.


I occupied myself while he was "working" with a little eco-friendly graffiti.


He swung on every vine that he could reach.


I was dressed to run in the woods, not walk or stand, so I was a little chilly.


Like my Taz glove?  It's one our many mismatched gloves laying around the house.

There were lots of trees down, so he decided to do some climbing across them.


After a while, he got stuck and decided that maybe he'd try going up from the other side.  Then, he decided we should keep hiking.  I mean, running.


I'll admit, I bribed him a little with mention of a ravine ahead on the trail with a creek at the bottom.  He was a little motivated to see this, so we managed a little running.  We played snowball fight as we ran, tossing handfuls of snow at each other.   When he stopped for a breather, we checked out some animal tracks.  There wasn't much to see...looked like some dogs, some rabbits, and lots and lots of birds.

He decided it was time to have the piece of candy he'd brought along, but he couldn't find it.  Must have dropped it along the way.  You wouldn't have thought the loss of one "gummy mummy" would be a big trauma, but then you're not a 7 year old boy.  "I'm going to staaaarrrrve to death!!" His coping mechanism? Rolling down the trail and whining.

"Let's just go home," I told him. (The definition of "empty threat", as we were about halfway around a loop).

Eventually we got past the candy debacle.  When we got to the ravine, he wanted to go down to the creek and feel the ice.  I wasn't crazy about the idea, but we ended up climbing down a gentle slope to get there.


We climbed back up, and the trail passed very close to some steep edges for a bit.  That made me a little nervous with an invincible 7 year old.


By this time, he was getting cold.  Of course he was...he'd been carrying ice, sliding on his butt, and rolling downhill in the snow.  "Hey, if we run, we'll warm up!"  So we managed a little more running.  He wanted to hold hands, which was nice, though difficult on the narrow trail.  He wanted to hold hands, which soon translated into "he wanted me to pull him up the hills".  I don't know about him, but by the time we got to the top, I was warmed up!

I made a couple of wrong turns.  I'm not super familiar with the trail yet, and it look different covered in snow.  Pretty soon we got back on track.  He found a small branch, so we played "soccer" with it as we walked down the trail.  Then, it (thankfully) broke (nothing to do with me, unless my mental energy broke it) and he picked up a walking stick/gun.

﻿﻿Towards the end of the hike, we were back to running.  As we ran, he used his gun to shoot trees out of the way.  The time it took us to make our loop on the trails? Approximately an hour and twenty minutes.  Yep, that's about a 40 minute mile pace for the two miles we "ran".  Not exactly what I had in mind.  Still, I'm glad I took the opportunity to get outside with my little boy and let today be about "us" instead of "me".

(Tomorrow's run, though? It's all mine!)
Labels: Kids priorities trail running