So much for keeping you all in suspense, huh?  :) 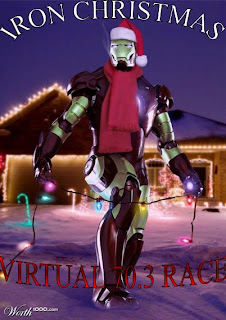 So, back on Tuesday, I followed Wendy's link to Luke's blog where he was hosting a virtual half ironman.  1.2 mile swim, 56 mile bike, 13.1 mile run between 12/20 and midnight 12/24.  Seeing as my longest ever swim was 100 yards and back in August and we're busy as all get-out getting ready for Christmas, I knew there was no way I could complete this race in the alotted time.

So, naturally, I signed up.

The one thing in my favor was that Tuesday was my last day of school before Christmas break.  Things not in my favor included the following: I was starting a day late, see above re: swimming, Tuesday evening was comprised of my husband's work party followed by 4 hours out of town because of my son's volleyball practice, and my husband was less than enthused by the whole prospect.

Here's how it went down:

So, my total time (including 3 1-minute penalties for eating cookies and 6 1-minute subtractions for "liking" sponsors) was 6:34:02.  And I am a virtual half ironman.  :)

And check out the pictures from my morning run.  My brother from Wisconsin ran with me (or, more to the point, I dragged after him).  The run was notable for a couple reasons: my brother was both sober and not hungover and we got to run in the snow.  The meteorologists had been forecasting a white Christmas, and a few snowflakes were falling as I left the house to pick up Jim.  They multiplied quickly and were starting to cover the ground as we set off.


I've been running on trails and running pretty regularly, but Jim's pace was a little faster than I usually go...and slower than he ever goes.  He told me once to let him know if I needed him to adjust the pace, but I figured he wouldn't want to walk with those bare legs, so I kept on huffing and puffing trying to catch up.  I was definitely dragging today, and since he was the one tracking the miles we had a couple "are we there yet?" moments.  Maybe because he was tired of listening to me whine, we transitioned from the singletrack trails (which were in fabulous shape...frozen so that they were solid, but thawed enough to give a little under your feet, like running on a track) onto the paved bike path.

We saw a few other people out on the trails today, including my friends Patrick and Wade.  Patrick's been logging some serious miles...just today he ran the thirteen I've been working on all week.  Funny, Jim and Patrick have never met in person, but both have heard of the other.  So Jim remarked to me, "Hey, and you drove yourself today!" and Patrick asked Jim if he was hungover (if you don't get the second reference, you can check out sober/hungover link above).

It was really fun running in the snow, though I was pretty wet and a little envious of my brother's jacket.  I mentioned that I needed to get one, which is funny because when we opened Christmas presents tonight, he'd bought me a sweet jacket that'll be great for running and hiking.  It was coming down pretty good, and by the time we headed back to the car, the roads and ground were mostly covered.  Only the grass was showing through, and it's all covered by now.


I'm in awe of people who actually compete in the half and full ironman competitions.  Amazing!  I've been dragging all week from getting in these workouts, and I've been able to do it bit by bit.  I can't imagine doing one after the other.  So impressive.  Even so, I'm proud of myself.  I really went into this not at all expecting to finish, but when the swim went OK on the first day, I realized I could do it.  And I am nothing special.  If I could finish this, so could anyone.  It's just like that quote from Winnie the Pooh says:

So believe in yourself.  You can do so much more than you realize.  I'm so glad I tried this.  And I'm almost as glad that I don't have to do it anymore tomorrow! :)
Labels: Iron Christmas virtual 70.3 running in the snow sober Jim surprising yourself wisdom of Winnie-the-Pooh