Skip to main content
Labels
Posted by Kate Geisen May 19, 2011

1. One cool thing about the LaCrosse marathon was that the local camera club volunteers its time.  All of the pictures they took were posted online for us to copy and keep.  No spending $$$ for race photos (which is nice, since I had to buy two new tires that trip). Thanks, La Crosse Area Camera Club!

2. Here's one from early on in the race.

3.  Here we are coming in to the finish line.  I don't hate this picture as much as I hate most of my race pictures, and would you look at that smile? You can tell my brother is hurting (remember, his legs started cramping right at the end?)


4.  This month has been really stressful.  In between coming up with the money to buy plane tickets to California for N's volleyball tournament, money to pay the balance of his club volleyball costs, money for the assorted costs of college orientation for D, money for a graduation party for D...it'll be a miracle if I don't have an ulcer AND still have my bike fund in June.  Breathe in, breathe out...repeat.

5.  We all know I'm not mother of the year, but at least I don't have a report card to show it.  I found this picture on http://www.passiveaggressivenotes.com/.  Funny stuff. 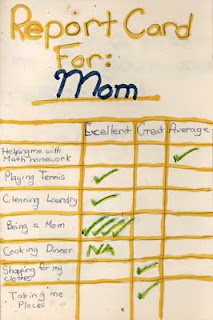 6.  Yesterday was Jeff's and my anniversary.  Nine years ago, this is what we looked like: 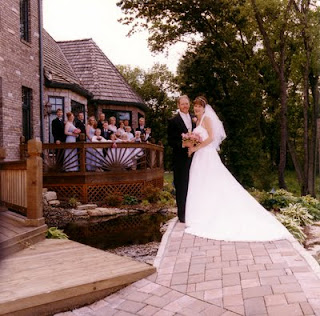 7.  We had a beautiful wedding, a wonderful reception, and then spent a week in Mexico.


8.  This past weekend, while we were camping in that cold rain, I passed the area where the cub scouts were tent camping and thought to myself, "Boy, poor cub scouts...I bet they never expected it to be this cold and nasty in mid-May."  And then I remembered that it had been like that for our wedding (not rainy, but unseasonably chilly).  And then I realized that our anniversary was in three days.  Sooo thoughtful.  Yeah, bet you wish I was your wife.  lol.

9.  Leaving the volleyball match on Tuesday evening, I asked Jeff, "Can we establish that we aren't buying each other anything for our anniversary? Just cards, right?" (see #4 above)  (Yes, I realize that this proves that I hadn't yet bought him anything on the night before our anniversary.  He agreed.

10.  Yesterday at school, I was called down to the office.  For these.

The flowers caused some minor commotion in the classroom since the kids were all excited about them, so we turned it into a journal assignment: What should I give my husband for our anniversary?  Suggestions were a tie, a guitar (I'd love it if somebody played guitar...I have these daydreams of sitting around the campfire singing along to the guitar playing John Denver songs), and go bowling.

11.  You know what's fun? Schlepping a dozen roses home when you have a 40-minute commute.

12. This year for our anniversary, we dined at Chez EHS...a very exclusive venue otherwise known as the local high school.  We were there for the volleyball banquet.

13.  I haven't run since last Thursday.  I haven't been home one evening since then, and I've been to bed too late to get up early to run.  On one hand, I know running would help me deal a little with some of the stress; on the other hand, I get mean when I'm overtired.  We'll just call this a rest week.
Labels: anniversary fine dining flowers pictures