Well, I finally got that compost dug into the garden. It didn't go all that far. It takes forever for our compost to, well, compost I guess. I think it would go faster and get hotter if we put in grass clippings, but we just use a mulching mower. It would also help to get more air and more mixing done, but that's not going to happen until I can get Jeff to build me a new compost bin...and I'm not holding my breath there. I'm still waiting to have him hang the pictures that I framed back in December! (and, yes, I know that I am capable of doing these things...or could be capable...but they're just some of the things that he does)

Found a big frog in the garden. Must have woken him up, because he was none too perky at first. Jacob got a kick out of looking at him for a while. Had to be careful not to dig up my volunteer oregano. 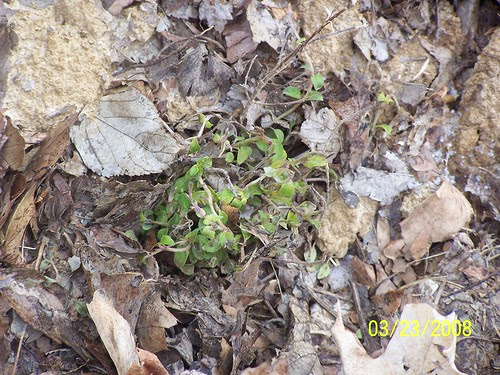 It's not that pretty, but it's already got a little size and it smells SO GOOD. It's a nice head start until my oregano and basil seedlings take off.

I also went ahead an planted my broccoli seedlings. We haven't had much luck yet with broccoli. I'm hoping it's because it is a cooler weather crop and we don't usually get our garden going until late May/early June. I did much better this year. Of course, the peat greenhouse/pot that I used to start the seeds is one that I bought last year!

We'll see how the broccoli does. Today we had a long, steady rain, so I'm a little worried that it was too much for the little seedlings. I'll be pretty disappointed if they don't make it. I can already taste my own broccoli, and it would be nice to not have to buy it for the summer. After planting the broccoli plants, I mulched that area of the garden with straw from our Halloween bales. My hands are killing me today, all itchy, dry, and bumpy. I have to get some gardening gloves...and use them!

We've also been using the bread machine a lot. Jeff is on the second straight loaf of multigrain bread that I've made. We have a bag of store-bought bread in the freezer as a reserve, but so far I've managed to keep on top of things. This latest loaf is probably the best. The others were really dense. This one is more store-like. It's definitely a learning process. Poor guy! He's stuck eating the trial loaves, too.

Had a lovely scene with Jacob this morning. Kids are so fun...yesterday I stayed home with him because he came home from day care with a fever and it drives me crazy when other people take their sick kids to school. He felt pretty good most of the day and kept saying that he wanted to go to school. So, today--when he IS going to school--he throws a fit, says he hates school, and cries as I left him for the first time since his second day at this day care. And I didn't handle it all that well since he was poking along all morning and I needed to get to work...I'm sure that my crabbiness with him helped make the drop-off worse than it could have been. No "Mommy of the Year" awards for me this week! I was going to leave work once my kiddos were gone, but I called the day care and he was doing fine, so then I felt a little better.

In other news, Nathan was pretty talkative last night after track practice. He was pleased because he had jumped 5'4" in high jump. He has big hopes for this year since he competed in the state track competition last year. He'll probably have to step things up if he wants to go again this year, but he's already added 3 inches to last year's best, so who knows? Track meets start up next week, so life will get really busy again. He has two meets most weeks, and I try to get to most of them. Luckily, he doesn't compete in any of the longer distance events, so we won't be stuck at the school all day!