Well...what an experience. Today dawned cloudy and slighly ominous. I actually got to Staunton pretty early, and Daniel and I checked in and got our t-shirts and everything. There was a huge pack of riders...1,120 showed up to ride today, trusting that the weather would be good to us. 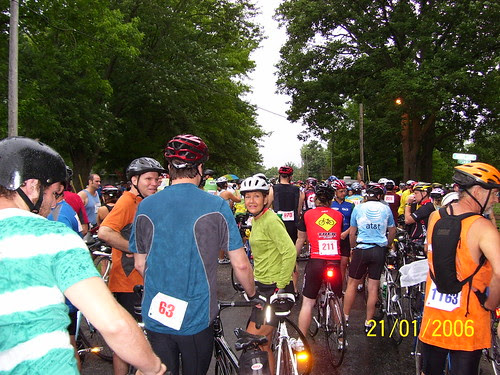 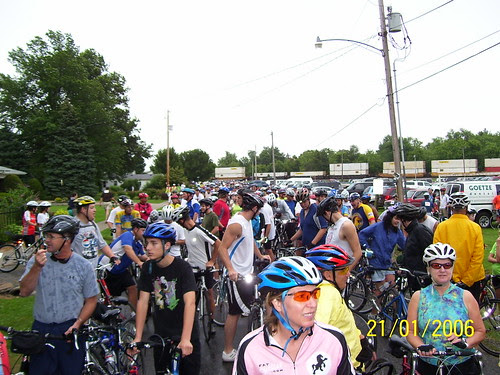 As we stood in our place in the pack of riders, it started to rain. Of course, it was windy and chilly, too. Trying to think positive, I said, "Well, it could be worse."

Daniel looked at me like I was crazy and said, "What are you DOing??? Do you WANT it to rain harder??"

And then it did. 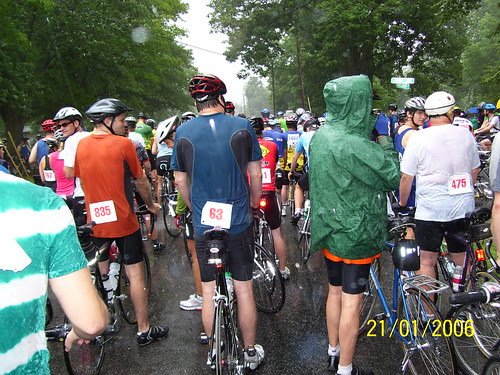 It POURED on us. Big, fat, hard raindrops. All you could do was laugh...and shiver. We were soaked. The worst part was waiting in the rain for the start. We were there for about 40 minutes before they started us off. Once we were riding, I didn't feel cold anymore, though I still needed sunglasses to keep the rain from pelting my face.

I've never ridden with so many people before, so that was a little scary, especially combined with the wet roads. Daniel stayed ahead of me for the first 10 miles, and I was starting to wonder if I was going to get my butt kicked by a kid who's only ridden his bike twice this summer.


One thing I hadn't really expected was HILLS. There were sooo many hills on the course! My legs definitely got a good workout today! I am usually a big chicken going downhill (just ask Jeff about riding bikes at Meramec State Park!), but today I needed the momentum just to get up the next hill. At one point, my bike spedometer showed I was going 29.9 mph. I had to just hold my breath and pray.

I saw Daniel at the first donut stop (Prairietown...about 10 miles in). I believe he ate 6 donuts there. I limited myself to 3. I left that stop before he did, and I didn't see him again until he crossed the finish line. 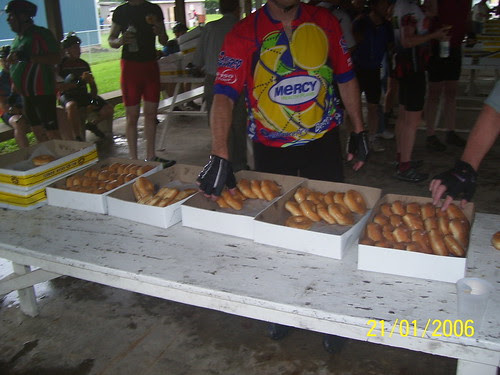 The first 10 miles were quite an experience, what with all the other riders, the rain, and the hills. I was asking myself, "Why am I doing this?" After that first stop, though, it got easier. The second stop was in Wordon. I ate 3 more donuts, which made the 6 I had planned to eat; then I ate one more for good measure. The end of the ride was really neat. There were people standing on the sides of the roads clapping and cheering for us. It was a nice boost there during the last 2 miles. In the end, I crossed the finish line after 2:02 hours of riding...and 2:16 including the time at the donut stops. 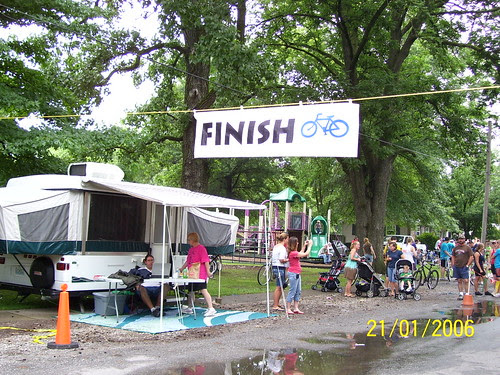 I averaged 14.1 mph over the 32 miles, which is my best average speed yet. I was really surprised by that because of all the hills and the wind. Even with my best effort yet, I was number 453 to cross the finish line, barely in the top 50%. But still there. :) Daniel and I are both strategizing about how to do better next year! 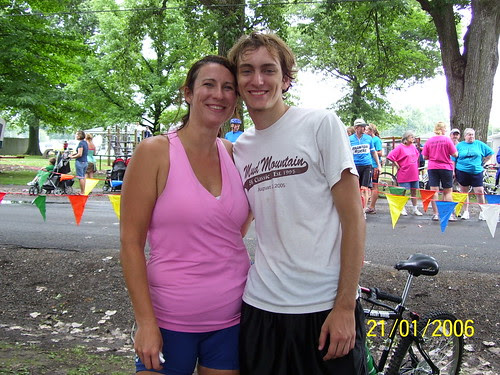