The Sweet, Sticky Taste of Victory

Today Hamlet and I rode in the Tour de Donut. 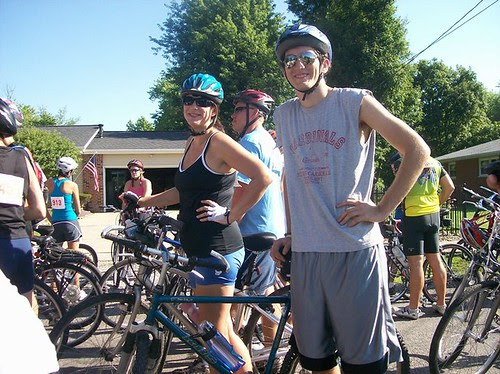 While it's held in a small town (Staunton has a population of 5,030), this quirky race has become quite a draw. This year, 1,272 people registered, and 1,203 actually showed up. That's a lot of people on bikes!

Last year was my first experience riding in the middle of such a large group, and this year was only a little less intimidating. Here's the crowd behind us. 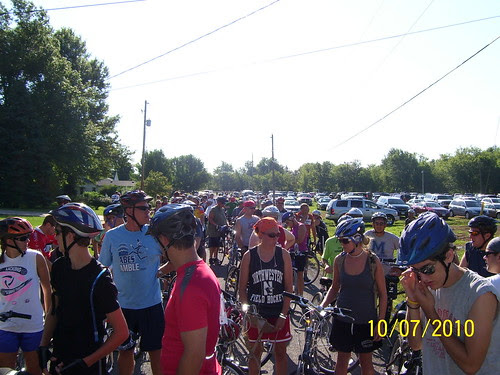 Unlike last year's downpour, though, this year was sunny and beautiful. It was much less scary riding in the middle of a group on dry streets!

The race is held in conjunction with Staunton's RibFest. At the beginning and end of it, we rode between the booths set up for the festival. 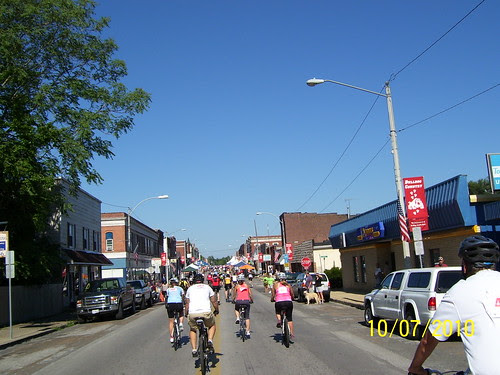 There were lots of people cheering and ringing cowbells. It's a neat feeling to ride through that. :)

Once we got out of town, the pack spread out. 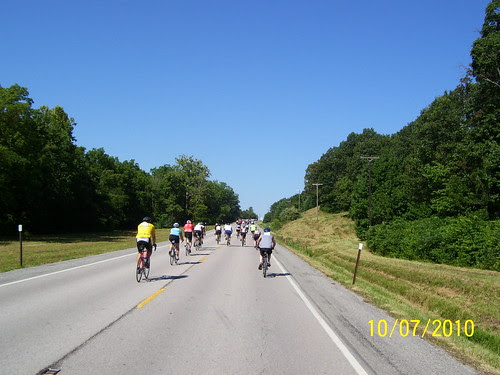 Though I haven't done much riding this year, I felt better riding. Stronger. I think my running has definitely made me a better cyclist. In addition to just better fitness, my body is more accustomed to being pushed. This is a fairly hilly route, at least compared to the flat trails I usually ride, but I felt really good coming into the first stop...which is where the fun starts. 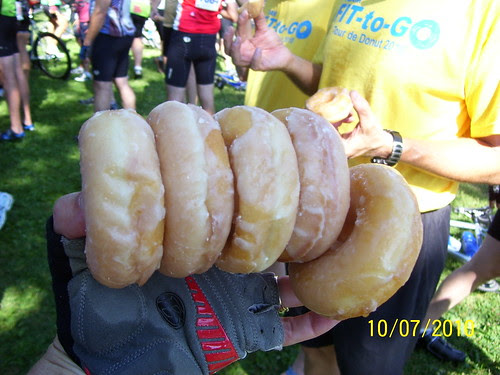 The Tour de Donut's namesake food isn't there just for a snack. For every donut you eat, 5 minutes are deducted from your time. Awards are given for both actual and adjusted time winners. Last year, I ate 7 donuts total. On reviewing the times for last year, I realized that if I'd eaten 14 donuts I'd have won first place, donut adjusted time (DAT). That was my plan of attack for this year. I'm not fast enough to win straight out, but I can eat!

At the first stop, I ate 6 donuts. They went down pretty easily. Hamlet was just pulling into the stop as I rinsed my hands with my water bottle and took off again. 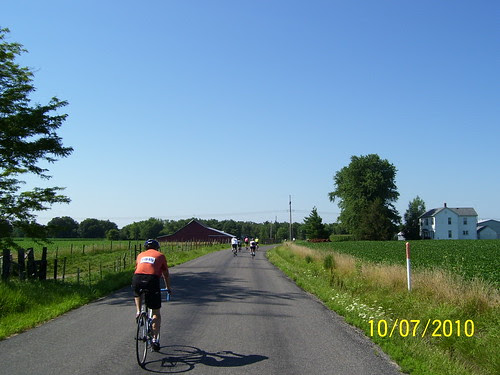 Our area of Illinois doesn't have a lot of dramatic scenery, but rural areas have a quiet beauty of their own. Did I mention that it was a glorious day to go for a bike ride? 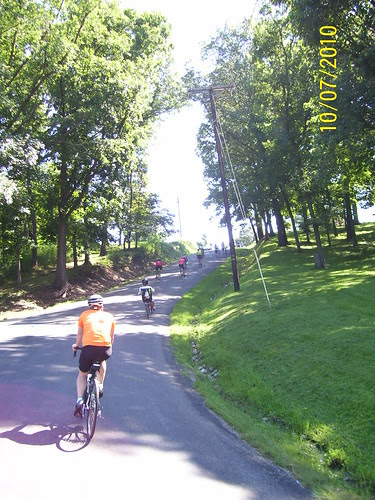 I have to say that, while those first (six) donuts weren't too hard to eat, they didn't sit well with me. I didn't feel sick, but I sure didn't feel good! And where was that sugar rush of energy? I could have used it. The middle 10 miles had more hills, including one killer that an awful lot of people ran their bikes up. I rode mine up, but it was a pretty slow effort.

Still, all in all I felt pretty good pulling into the second stop, especially with the knowledge that the hills were pretty much behind us. As I rode, I had been rethinking the whole "14 donuts" plan. The thought of another 8 donuts...well, it just wasn't happening. I decided 5 would have to do. 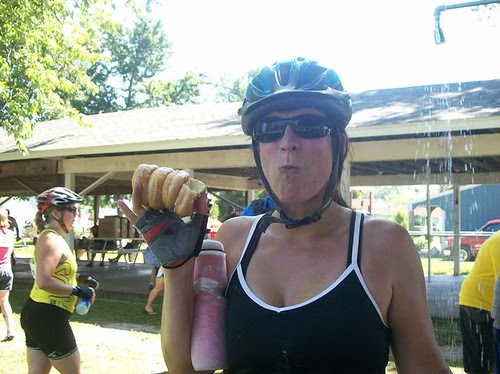 I should also take a moment to note that the pictures of me were taken by my ex-husband's wife, who is a good friend of mine (no, I didn't know her before they were married, and there's a wife between us. yes, I am blessed to have such a good relationship with someone who shares my older boys with me.) 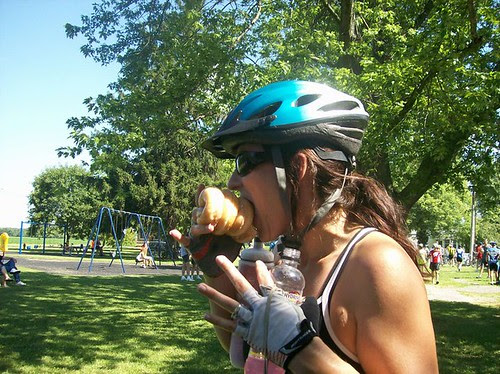 These donuts were some slow going. In fact, at one point I told Willy (ex's wife), "If you wait around a little bit, you might get a picture of me throwing up." I managed to choke them down, though, and move on a long.

Hamlet, who has ridden a bike exactly once this year prior to today, was struggling by this point. He hit the second stop about a half hour behind me. 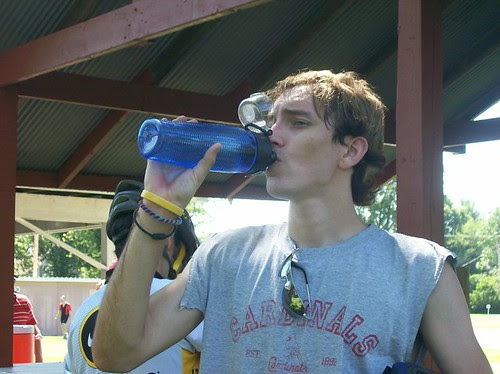 I pushed on through the last ten miles. I was definitely dragging more here and there on this segment, but I also really wanted to make those 11 donuts count.

When I came into the finish, I was so glad to be done. I felt like I'd ridden fairly fast (for me. This would still be an embarassment for most serious cyclists), yet when I looked at my phone (I didn't use any stopwatch or timer. I'm not sure why. I didn't use the GPS app on my phone because I was pretty sure it would drain the battery before the end) it seemed like I had about the same time as last year...around 2:16.

Now, maybe part of that was a little more time at the donut stops, but the race was also three miles shorter this year, so I was pretty disappointed. In addition, I was feeling pretty miserable physically. Eleven donuts is waaaaayyy too many donuts for me to eat. I found a tree and leaned against it and tried not to be sick. 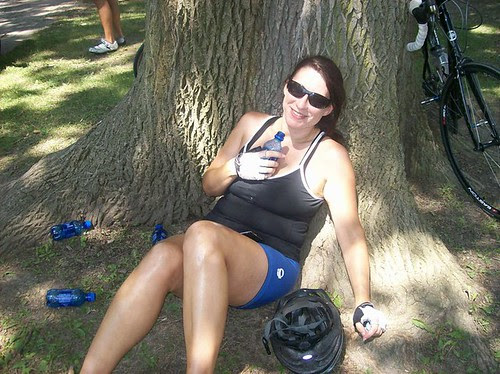 That's where Willy found me. (Note: NOT my bike in the back of the picture. I wish. I'm still riding a hybrid and saving up for a road bike) After a little bit, we walked back before the finish line to wait for Hamlet and cheer on the other riders. He showed up about 40 minutes after I got in. 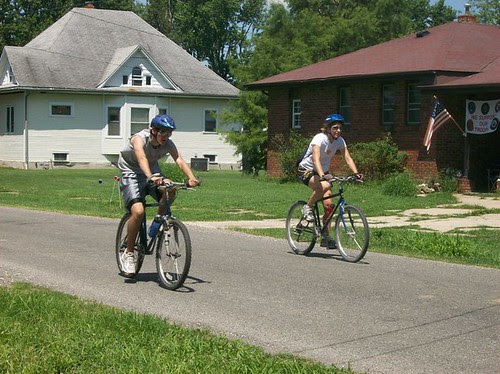 While he may have been cussing me on the inside, he still posed for a picture with a smile. 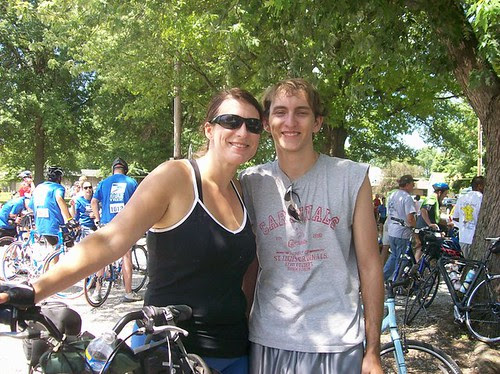 I'll tell you what, I'm proud of him, too. It's not such an easy thing to go do something out of your comfort level, especially when you haven't trained for it, but he still got out there and pushed through it. I like that we have this to do together.

Since he'd been up late the previous night and was pretty wiped out, Hamlet went back to his dad's house. Not me. I was banking on those eleven donuts to bring me home a Donut Adjusted win. I sat for a half hour before the awards started, then had to sit through all of the actual time winners for all of the age groups, men and women. Then, they moved on to Donut Adjusted winners.

Most of the men's donut adjusted times crushed mine. One guy had a time of -13 minutes (donut adjusted). He ate twenty-five donuts!! I'll say, though...he looked like a donut-eater. Some of those guys eat 15+ donuts and there they stand with their little skinny cyclist builds. So wrong!!

As the women's times were announced, though, I started feeling pretty good. Guessing my actual time at 2:15, the eleven donuts I'd eaten subtracted 55 minutes, for a donut adjusted time of 1:20. As they finished the 20-29 women and moved on to my age range, I even showed Willy how to use my camera and iPhone so that I could post my winning picture immediately.

Well, pride goes before a fall, and three winners were announced...none of whom was me. I was crushed. It's ridiculous how disappointed I was. This little race doesn't mean anything in the scheme of things, and I wanted to cry. All those calories, for naught. To add insult to injury, the third place winner's DA time was 1:26...and I was sure I'd beaten that. But what do you do?

Well, it turns out that there was some problem with calculating the times, because on the event website tonight, guess who won second place (DA)???? Me!!!! I am ridiculously delighted. :) And now I want my ribbon! :)