I am really proud of my boys! We had a busy, busy day thanks to them today, but it was great!

Nathan played in the Triad Jamboree today. We had no idea what exactly a football jamboree was. Turns out there were a total of 5 teams. Each team played a 15-minute quarter against each other team. The team with the best record (or highest point total) won the Jamboree. Our team went undefeated. Go Tigers!!

Nathan played great, despite having a broken toe (yes, the boy plays football, tackling and being tackled...and breaks his toe playing family volleyball!! Luckily it was just a small, very stable fracture, so the doctor OK'd him playing on it as long as it was well taped). He was amazing.

He caught a pass for the 2 point conversion after a touchdown. Look how high above the other player he is!! 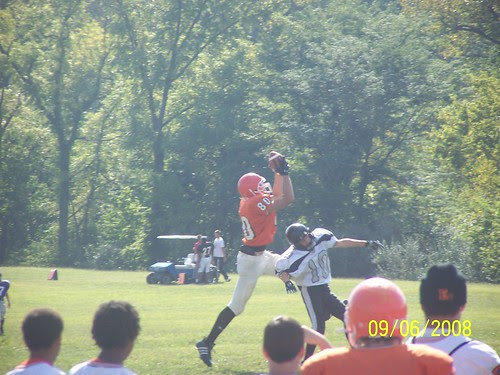 In another game, one of the opposing players broke away from the pack and was headed to the endzone to score. Nathan came from way back, caught up, and tackled him. 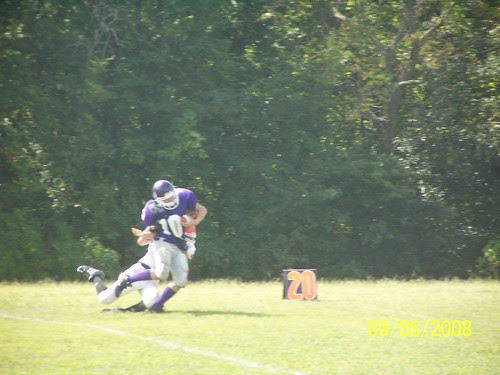 You can just barely see Nathan behind the kid in purple. My ex-husband got it on video, too, and you can see Nathan streak out of nowhere and bulldoze the kid. It was great.

And, they continued the winning tradition. This makes 7 straight years we've won the Jamboree. Yea us! 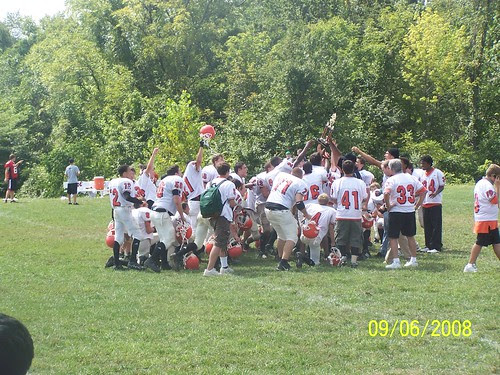 Also today, Daniel had several parts in the Thespian group's play, "All the World's a Stage". The drama teacher likened being part of Thespians to a Boy Scout getting Eagle Scout...in other words, a big deal. Daniel was great...especially in his part as a girl! :D He just gets more and more confident and comfortable on stage. I am frequently amazed by his voice (didn't get it from me, that's for sure!!) and his ability to get up in front of people and act his heart out.

No question about it, I am blessed to have these kids (and since they're at their dad's house this weekend, it's easy to remember that!!).
Labels: acting blessings Daniel football Nathan