Hole in one and a bump in the head 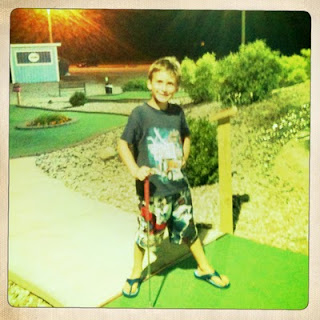 We do what we can to keep our kids safe. We babyproofed our house. We put sunscreen on our kids. Even when there are lifeguards, I stay near them or watch them like a hawk while we swim. They always wear seatbelts.
Our football player wears pads. Our soccer player wears shin guards. On bikes, we always, always wear helmets. We try to protect our kids from potential dangers. And then, one day, one of them gets a concussion playing mini golf.
In a rare moment of unanimity, all three boys wanted to play mini golf after our day at the beach.  By the time we got there, it was about 9. Despite having had a very long day and only mini golfing once before, little J did great.
He got a hole in one on the second hole, and even holding his club backwards AND swinging from the wrong side half the time, he was out-putting most of the family. He was having a blast.
Because he usually got to putt first, little J was often the first one finished with a hole. He started going ahead to scout the next hole. At one such point, big J and I were still golfing when the older boys yelled. I looked over and saw little J on the ground.
He had hopped off of a fake log onto the green, which was soaked from one of the overflowing water features. His feet slipped out from under him, and he fell backwards. I only know the details because N saw him fall. Little J was crying too hard to tell us anything.
He finally was able to tell us that his head didn't hurt, just his knees. Now, that doesn't make any sense in light of how he fell, but we didn't know that yet. As soon as we got into the car, he was complaining that his head hurt and was falling asleep.
J and I were looking at each other like "what should we do". We picked up some children's Tylenol while I googled "concussion symptoms". It's all so nebulous...difficult to console (umm...he just got hurt), complains of head or neck pain (well...he was crying awfully hard), fatigue (it's bedtime after a long day. And crying takes a lot out of you). We went on back to the campsite, still wondering what we should do.
While getting J changed for bed, I asked him again about what he hurt when he fell. His answer gave me a chill: "I don't remember falling." Which, I guess, explains why he couldn't tell us if he hit his head...because one minute he was checking out the green and suddenly he was lying on the ground hurt. (And, for those who are keeping track, you can check off our fourth and fifth concussion symptoms: confusion and amnesia. In the words of the Mayo Clinic website, "the amnesia...almost always involves loss of memory of the impact that caused the concussion."
J sleeps right next to us in the camper, so I spent the first two hours watching him breathe. Periodically he'd whimper, and then he woke up crying. We brought him into our bed with us, and he woke up a half hour later throwing up (also mentioned in concussion websites).
At this point, I called the physicians' exchange. Thankfully my doctor was on call and called me right back. He advised me to give J another dose of Tylenol and check on him in an hour. If things didn't seem right, then we should take him to the ER. In his words, "It's probably all right, but it's the 'probably' that gets you."
An hour later (2:30 a.m), J seemed as ok as you can be when your parents are rousing you from a deep sleep, so I set my alarm for 3:30 and finally dozed off. He was ok at 3:30 and 5, and he's seemed fine today. He complained of a headache this morning, but he's been going strong all day. I suspect our biggest problem is going to be keeping him reined in a bit for the remainder of the trip.
So...scary, scary night, but it all seems to be ok. It was a reminder of the unfortunate fact that we can't protect our kids from everything, not even when we're right there. I did a lot of praying last night, let me tell you. I'm so thankful that things turned out all right. And for my wonderful older boys, whose love and concern for their little brother were on full display last night.
Labels: concussion miniature golf Wisconsin