My friend and co-worker E., who also ran the HM yesterday (and beat me) sent me a message this morning: "We should wear our new shirt today!!"

It was a lot of fun to tell my class about the race.  I brought my medal to show them, too.  Showing the medal, I was careful to explain that I didn't win; everyone who finishes gets a medal.  It brought back memories of being back in college (the first time) and asking my friend Keith, who's been running marathons forever, "Why would you run a marathon when you know you aren't going to win???"

I totally get it now.  It would be amazing to win, but I am completely thrilled by exceeding what I knew I could do.  I love attempting something difficult, the possibility of failing, the victory that you find even in falling short.  It struck me as I was talking to my kiddos how similar my running is to their education.

I hope this comes out right.  If it doesn't, I guess I can delete it, but I hope it does.  I teach in a first grade special education classroom.  This year, my students come to me for their core classes: Language Arts and Math.  They're able to participate in the theme-based science and social studies in their regular classrooms.  Whether or not that's possible every year depends on the kids.

Anyway.  Running for me...for most people, isn't about coming in first.  It's about starting where you are and becoming better.  In school, my students aren't typically the ones in the academic equivalent of the 6 min/mile corral.  Through no choice of their own, they're considerably further back from the starting line.  But it's not about finishing first, it's about finishing.  And success isn't measured just in relation to how others finish but in your own progress and improvment.  You're not a failure if you aren't able to finish, but you don't have a chance if you never start.

None of this, by the way, is to suggest that I lack high expectation for my students.  I would like nothing better than to eliminate the need for my job.  I track their every improvement and backslide in the same way that I track my pace and mileage, and they're well acquainted with their charts and graphs and what it takes to reach any particular finish line or goal.

I don't have a snappy conclusion here...so I'm just going to move on now to coming attractions. 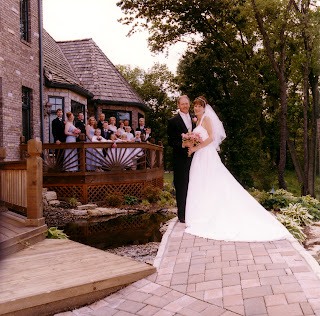 Instead of feeling nervous yesterday while I waited for the half marathon to start, I felt kind of sad, like I did after my wedding (after the second wedding...I was sad after the first one, too, but for a very different reason. lol).  So much planning had gone into that day.  It truly was my "big day", and now it was over.  Life would just be normal without such a  big event to anticipate.

I was feeling that same way even before the starter's gun.  I worked hard for this thing.  It was here.  I was ready.  And now what?  Instead of being relieved that my training was over, I felt a little empty.

In addition to missing the excitement of the upcoming, I also need to have something to keep me honest.  If I don't have a race or something big scehduled, I can't seem to get myself out of bed.  I'm not that person who runs for the love of running...yet, anyway.  I may not be racing to win, but I'm racing to run better, and somehow it's more real when you've paid for it and someone else is clocking your time.

Luckily, I have a few "what's next" items to keep me excited and to shove me out of bed in the morning..all of which were suggested by friends.