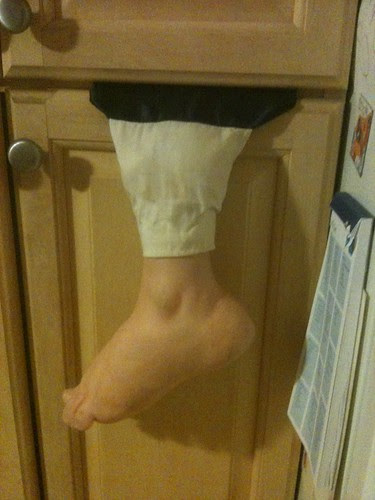 It's my least favorite time of the year...time for our annual family Halloween party. The buildup to said party is always a hellish time. For one, because though the date is set a couple of months in advance (after repeatedly consulting everyones' custody schedules), somehow we never really get working on it until the week before. And since that "work" includes costumes for the whole family, it's pretty much a recipe for disaster.


Jeff's family is really into Halloween.  Everybody but his dad dresses up, and in the past several years, each family has ended up dressing in a theme: Scooby Doo, Aladdin, vampires/vampire killers, holidays, Cleopatra/Mark Anthony, athletes, Star Wars, Addams Family, Ninja Turtles, etc.  It's amazing to see all of the different ideas, and it's daunting to try to come up with something cool that no one has done before.

We do our best to find what we can at Goodwill and other thrift stores, but this year we've really come up short.  That means I have to get out my sewing machine, which only escapes its garage exile during October.  I can sew, but only costume-grade clothing.  I wouldn't actually wear any of it otherwise.

This week, I've been chained to the sewing machine.  I haven't done a thing after work other than make supper and sew.  Just like my running, I'm slow at sewing, too, and this is compounded by the fact that I've had to find patterns that are "similar" to what I want and make them work...with mixed results. 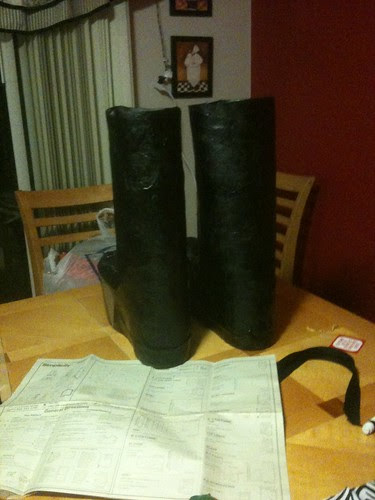 I should say mixed success.  The results are pretty consistent: one big, ugly mood.  My Facebook posts have been along the lines of "I hate Halloween" "I hate costumes" "I hate sewing".  A combination of already putting too much pressure on myself and the pressure of a looming deadline has made me a really unpleasant person to be around.  The kind of person who wants to fire off a nasty response when my nephew posted something about all these whiny people complaining about Halloween.  (I resisted.  Barely.  Don't think I didn't mentally compose lots of them).

I'm sure you're thinking, You just need to start on your costumes earlier.  That'll help.  I think that's a great idea.  I've thought that was a great idea every year.  I'll see you next year about mid-September?

You're probably also thinking, You're seriously overreacting.  And again, you're right.  You're brilliant!
It's a little ridiculous, really, to be so upset over a stupid costume.  This isn't important in the scheme of things, I know.  And yet, there I was, my second trip to Wal-Mart in just a couple of hours (and Michaels, how could you let me down with such a measley sewing department?), near tears because I was afraid that none of the three zippers I bought for J's costume was going to work.  Or snapping at my husband because he had the nerve to expect me to cook dinner AND sew. I guess that's where I really get frustrated with the whole party drama.  The whole point of it is to have fun with the family.  To make memories for our kids and enjoy ourselves, too.  I really don't want my kids' memories of Halloween to be me freaking out and being hateful for a week.  Of me telling them, "No, I can't tuck you in.  I'm sewing."

And while my older boys like Halloween and the party ok, J loves it.  He's completely his daddy's boy.  As soon as October hit, they were pulling out Halloween decorations (and my goodness, we have a lot of them!).  Today J and Jeff spent a great deal of time putting out decorations.  N. did some work for his costume, and D. did some help around the house in between naps and Gamecube (his girlfriend did his costume).

As of now, I have J's costume finished (and it's pretty marvelous, I have to say), N's costume finished (not just my work there at all; in fact, I did the smallest amount on his), and mine barely started.  :-/  The party is in 16 hours.  I'd like to make some fun Halloween party foods.  Gotta say, it's not looking good.

Along with all the other things you're thinking, you might wonder, If you're so busy with this party and the costumes, why are you spending this time blogging?  And if you are, you're probably not alone, but no body in this house is going to verbalize that.  Because they want to live until the party.  And at this point, there are just no guarantees.