I debated most of the week whether to run this one or not.  My knees really took a beating at the Skippo race, and it took me until about Thursday to be able to go up and down stairs without limping (much).  By Thursday, though, I was feeling much better.  Plus, it was a Halloween race...costumes...how perfect for me, right?  Uhhh...sure.

I had a couple of costume ideas, but since I spent until yesterday afternoon working on actual Halloween party costumes, I didn't have much time to pull something together that I'd want to wear while running.  So, there I was last night at 11:30, going through old costumes in the garage.  I ended up settling on a witch costume. (Typecasting?).  I love the tights. They make me smile.  And I'm most definitely wearing them to school for the Halloween parties! 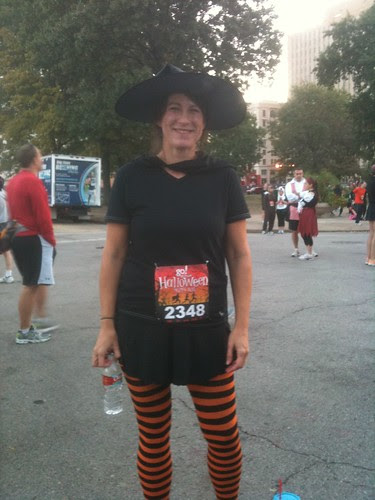 As you might imagine, that hat didn't stay on long. I ended up carrying it from the start.  I had actually planned to toss it at the water stop at the halfway point, but I accidentally dropped it earlier and figured, Oh, well.  Unfortunately, some good Samaritan picked it up and ran it up to me, so then I felt like I had to carry it the rest of the time.

There were  a lot of cute costumes: Mario Brothers, Things 1 & 2, Wile E. Coyote and the Roadrunner (complete with a BEEP! sign), PacMan characters, pirates, and superheroes.  The best costumes were the two girls who came as Captain Underpants.  They were wearing tights with a pair of underpants over them and capes.  Very funny.

It's a pretty warm day for October (about 64 currently), and once I was running I was regretting the cape and short sleeves.  I really felt for the people dressed up in warmer costumes: a full-body gorilla suit, a banana, and beer bottles, to name a few.  I'm sure they were soaking wet when they finished.

The race sold out, and the announcers said there were 5,000 people running today between the 10K and family fun run.  We got there early enough to get  a nearby parking space and to use the bathrooms before there were any lines--score!  There were no pace signs, so I took a guess and found a spot a ways back from the start line.  Here's the road behind me: 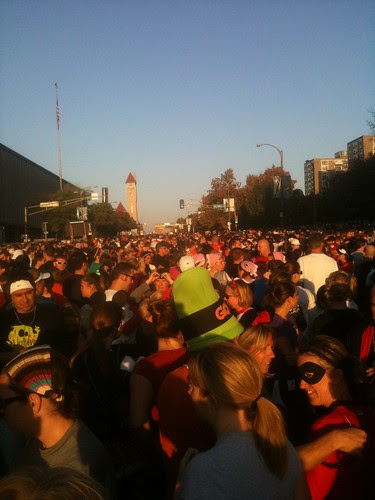 I was excited to run, but it sure didn't feel good as I started.  I maybe could have used a short warm-up jog or something.  The first mile felt like a lot of work.  I checked my time at the 1-mile sign, thinking maybe I was running too fast and that was why I was so tired.  9:14...nope!

I had hoped to PR today because the only other 10K I've run in was way back in June on an 80 degree morning (1:00:33).  That 9:14 and the way I was feeling really put a PR in question.  I thought maybe "it" would kick in after I got warmed up, but it continued to be a struggle for me today.  This was definitely a tougher course than the HM, with several hills, and I felt every bit of them.

They had a time sign at the halfway mark, and I was not at ALL happy to see it at 30:47 when I passed it.  Really?  I was on a pace to be slower than June.  I tried to pick it up a little, but I really didn't have much to give. 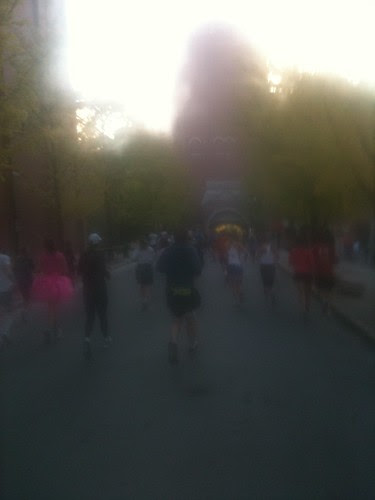 One cool thing on the course was running through the Anheuser-Busch property.  I tried to get a picture of it, but my phone was pretty sweaty, so the picture is foggy.

I started feeling a little better around mile 5 and started pushing my pace a bit.  As we closed in on the finish line, a girl behind me told her friend, "I've got 51 right now and we have about 1/2 mile to go."  I wasn't sure if they'd started behind me or not, but I was pretty excited at the thought of being that low at that point.  Really excited, in fact.  Right up until the route turned away from the finish line and looped past Citygarden.  I went from Yayyyyyy!!! to Nooooooo!!!!! in the distance it took to register that turn.

Once I turned back towards the finish line, though, I really pushed it.  I was definitely wearing down towards the end, and I could hear the announcer saying, "Come on...make it in under an hour...come on..."  I definitely wanted to be sub-1:00, and from what I could make out, the clock said 59:47.  No way I could make it in from where I was.  I was so disheartened.  When I got closer, however, I saw a 58 there.  Whew.  That's better.  My clock time was 59 something.  Not sure what chip time was yet, but my phone, after fumbling around to get it out and stopped, said 58:50, so I'm thinking my time is 10ish seconds less than that.  Update: chip time was 58:37.

So...since my other 10K time was 1:00:33, it's a PR, but it's a disappointing one for me.  Based on what my half marathon time was, I had anticipated coming in closer to 54 minutes.  Of course, I was well-prepared for the half marathon, and I haven't run much since then.  It's a good sign to me that, even though I can run longer distances, that doesn't mean I can go out and do well in a shorter race without some preparation.  Maybe other people can; I can't.  I'm sure those hills took a little out of me, but I wasn't doing well even before the hills.  Just one of those days, I guess.  But I finished.  I finished a little faster than last time.  I had a negative split (30:47/27:50) where my second 5K would be a new PR in a stand-alone race.

And I got a cool medal. 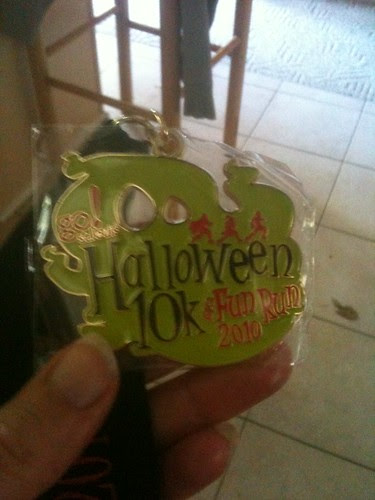