Thanks to sleeping inside, I got about 5.5 hours of sleep...really good for me on this trip. At 4:15 a.m., though, people were stirring. I got cleaned up, dressed, and packed up and then took my bags to the baggage truck. Breakfast was again scheduled for 5:30, so a little after 5 we headed up to the cafeteria. The move paid off; we were towards the beginning of the line. 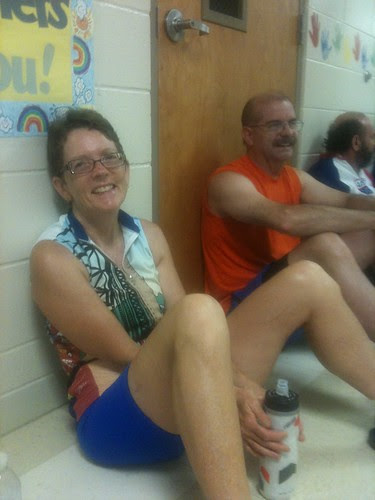 Misty and Ralph happy near the front

All this talk about places in line probably sounds pretty juvenile, but you DON'T want to be at the end of a 300-person line when you're trying to get on the trail early to avoid blistering heat.

We had a great pancake breakfast and then got out of there. The line of people waiting was INSANE. It was sooo long. I didn't even want to look those people near the end in the eye, I felt so bad for them. 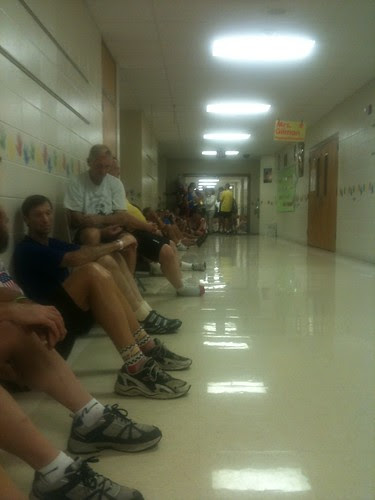 The line behind us-worst line of the week

Since the school was at the top of a pretty good hill, we had a fast ride back down to the trail. We had a fairly fast ride once we got onto the trail too. Not as much talking as previous days, and the trail felt like more work today. The heat started a bit earlier, and there were several open places along the way where we didn't have the lovely shade. 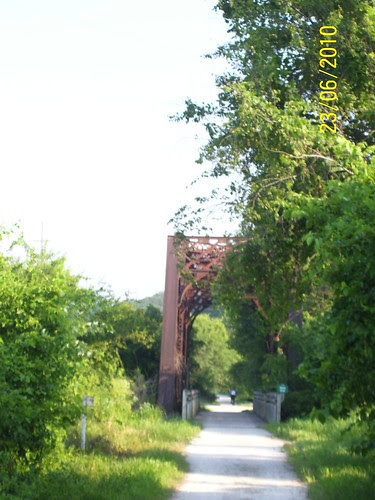 Yeah, it's blurry. I was riding my bike.

Even so, our pace was pretty good, and it sped up even more when a family from Sam's hometown passed us in a paceline with their daughter in the lead. Sam decided that wasn't going to happen and took off with them in hot pursuit. Of course, all this happened as I was slowing to tale a drink, so I had a lot of ground to make up. I caught up, and it was all I could do to hang on til Hartsburg, the site of our portage.

The bikes were loaded onto a truck, and the cyclists got to relax in the American Legion hall as we waited for enough people to fill the bus. As they were trying to move as many people as possible, the schoolbus was full. Only myself and one other person had our seat to ourselves. Poor Sam not only had to share his seat (and let me tell you, those schoolbuses sure aren't made for grownup bodies!), but he also had to cram his tall body in with the wheel well taking up most of the floor. I napped while he passed a hot, uncomfortable 20 minutes. 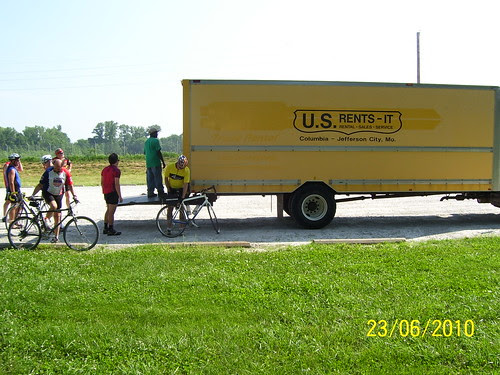 We offloaded in McBaine and headed off to Rocheport, about 9 miles down the trail. I left ahead of Sam, so he fell in behind me. We rode like that until the "Frat boys" came up behind us. These guys are great. They come every year, spend a lot of the free time drinking and socializing, and fly past most everyone on the trail only to lose ground hanging out at the SAGs. You get ahead of them for a bit, then their line passes you again and leaves you in the dust.

I heard them coming and decided they weren't passing me without a fight. I started pedalling harder, and they stayed back and let me pull. I was really pushing myself and was about to peel off when Jim told me something on the lines of, "you know, you don't have to prove anything."

I slid to the back and let another of the guys take the lead. 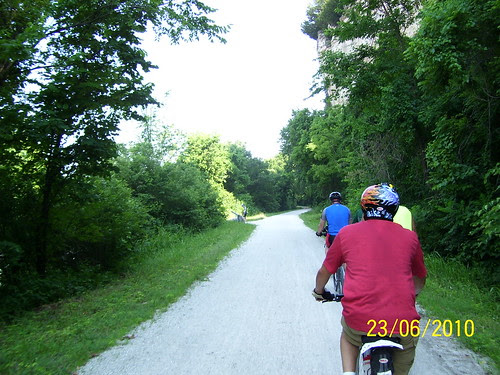 It was good practice for me in riding in a paceline. It makes me really nervous, but I did ok today. That's how we came to the trailhead for our campsite.

Tonight's campground is Les Bourgeois Winery. Beautiful place on the top of the bluffs. View of the winery from the river 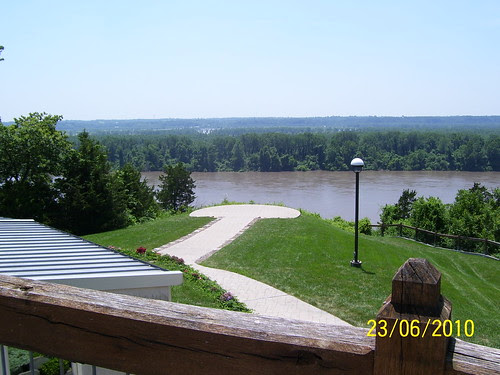 On top, and the TRAIL is at the bottom. The trail was gorgeous, but it was also rocky, winding, and very steep. I was dying pushing my bike up. I did get a few good pictures during a much-needed picture break. 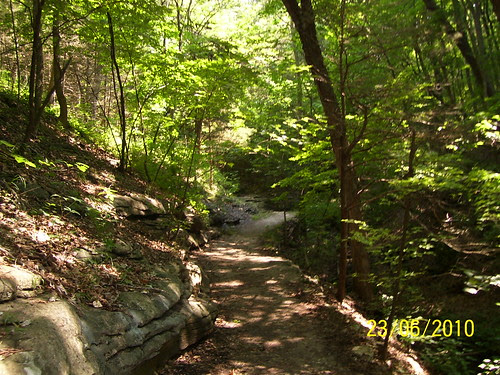 Flat part of the trail. Wish you could see the steeper part, but I was too busy trying to breathe to get out my camera. 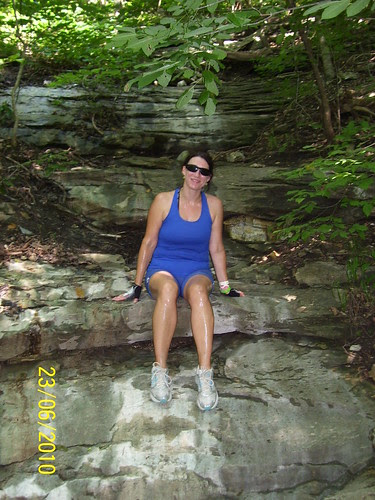 Tents were set up on the property and around the vinyards. 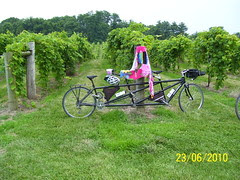 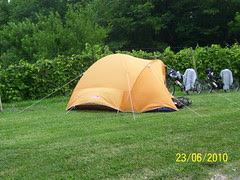 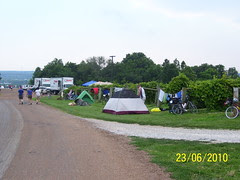 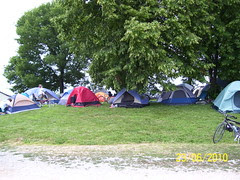 After getting our tents set up, we had a nice lunch (and I had a couple of glasses of wine)

at the winery bistro. My aunt Misty's friend George came to eat with us. He's done the ride in the past, but last year had to drop out bc of the heat. 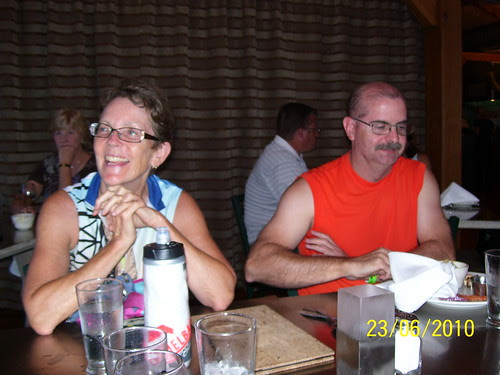 Misty and Ralph at lunch

After lunch and showers, my uncle Fred met us. After visiting for a while, he took us all to town for ice cream. When he left, I sent my sleeping bag with him. It's been far too hot to need it, and it takes up too much room in my bag.

Weather reports were calling for rain, so we put the rain flies on our tents before supper. Good thing we did, bc we got a pretty good storm. Luckily, my rain fly worked. Also luckily, Sam helped me put it on. I'm good with the tent, but I'm hopeless with the fly. 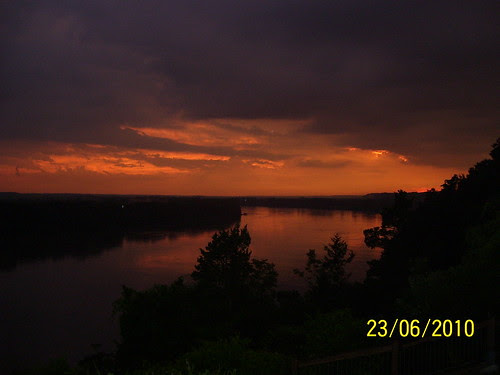 The storm left us with a beautiful sunset 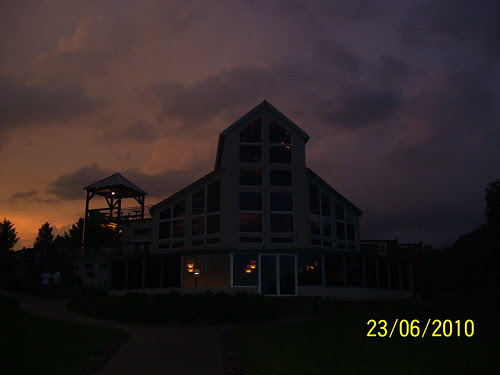 Because the rain kept everyone in the only dry area, our guest speaker had a great crowd. He talked and showed a slide show on the history of the Katy Trail. Very interesting stuff. This popular trail was extremely controversial at its beginning.

Took a walk around the property afterwards and then to bed. Thanks to the rain and cold front (though "cold" is exceedingly relative), the high tomorrow is only supposed to be 87. Welcome relief!!