I've got my baby back (baby back...baby back)...Cue the Chili's commercial

Kids go through stages. All of my boys, at one point or another, have adored me exclusively of anyone else. When Hamlet was about 1, I had to carry him through what seemed like miles of hallways through The House on the Rock. My husband (at the time) and MIL were along too, but the child wouldn't take anyone else. Jocko used to swear he'd live with me "until [I] die", which was both sweet and a bit like a prison sentence. Jr, too, has gone through stages where he really loved his mommy, but he's lately become much more of a daddy's boy.

I guess it's to be expected. The older boys' dad left when Jocko was 2, and though he's remained a consistent part of their lives, they've always lived with me. Jr, on the other hand, has always had his dad living with us...and he's a great dad, no question.

I was ready for the stage where he wanted to hang around with his dad more; after all, I've mentioned before how he's the "fun parent". That's cool. I can handle being the enforcer and the cook. What came as a surprise, though, is when Jr. started calling for his dad in the middle of the night, running to him when he got hurt, snuggling with him when he crawled into our bed early in the morning. What?? That's mommy territory!!

But here's the thing. It's all about the time. I teach 45 minutes from home, and despite what some people tend to think, teaching is no cakewalk. It's a demanding job, and if you want to do it well (OK...if I want to do it well...maybe there are those who can do well in less time), you don't always get to walk out of the building at the end of the day. My husband, on the other hand, pretty consistently gets home at 3:30. One of those things you can't really help.

And as much as I love spending time on my bike and running, there's no question that it takes me out of the house a lot. Especially the bike. I'm slow, so even a 12-mile ride is close to an hour. That's one thing I really like about running...at this point, at least, I can go out and run for 30 minutes and have a good workout in (as I type that, I'm thinking, clearly I need to be pedalling harder...but that's a different blog post). My husband is great about letting me go off and do weekend rides, weeknight rides, a weeklong ride (coming up!). He's supportive and proud of the running. But they're MY things...and while I'm off doing them, he's home playing and spending time with Jr. It's no wonder he's the go-to parent.

There are some things I can do to make that better (not the go-to parent thing, necessarily...if my son is attached to his dad that's a good thing)...run or ride earlier, include my husband and Jr. in the activities (more success in that with the older boys, though J and Jr. have come to my last two 5K's and taken pictures), step up better when I come home...but for now, I'm reaping the benefit of having my summers off.

I'm spending pretty much every minute of the day with Jr. Not just in the same house, but doing things together. It's exhausting, occasionally frustrating, and the stupid no TV thing has played hell with my running schedule...but it's wonderful, too. I've missed doing things together with him, and once you drag him into doing something that might not be his first choice (the museum, baking cookies--eating them is another story!), he likes to do different things. And yesterday morning, he crawled into bed on my side. 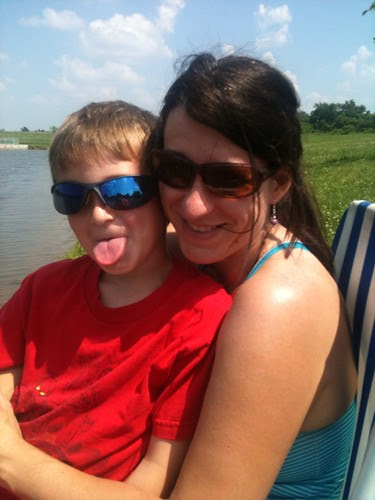